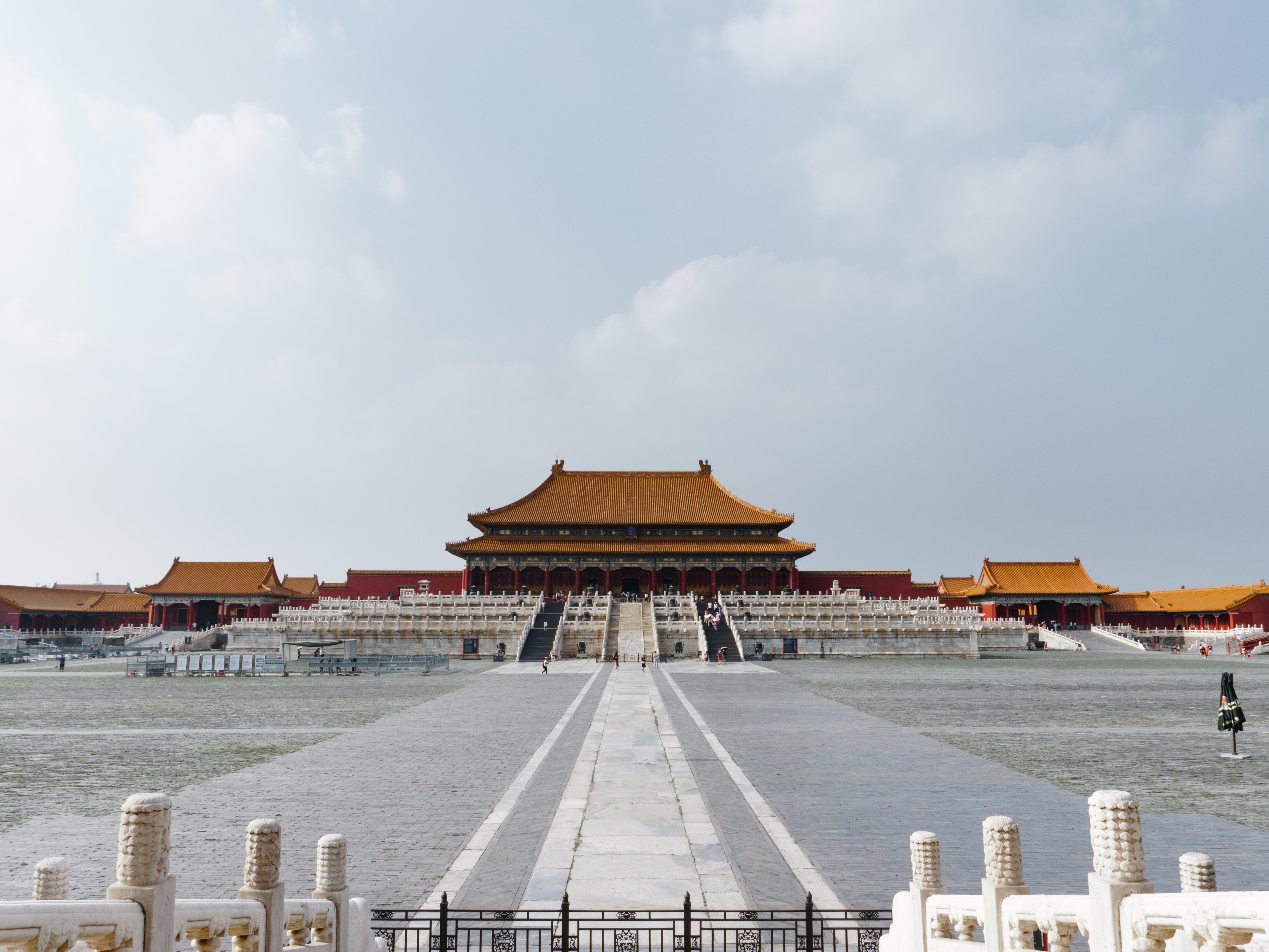 We got up early Wednesday morning only to be received by a rainy, foggy Beijing, thus we decided to push our excursion to the Great Wall back to the following Saturday.

Instead, we made our way over to Mao’s Mausoleum–a massive building at the foot of Tian’anmen Square, entirely dedicated to the founder of the People’s Republic of China. As we approached the square, our guide, Allen, told us to leave everything except a form of ID on the bus. He also told us that he would not be going inside.

We walked through a puddle-ridden Tian’anmen Square towards a long security line. We waddled through the line and up large stone steps, where several people were peddling yellow flowers (which Shaosong so eloquently stated, “are for dead guys.”) We seemed to be the only group of foreigners entering the mausoleum, being that most of the Chinese visitors were here to pay respect (often with these yellow flowers).

We stepped inside, out of the drizzle, and onto a red carpet.

In the middle of the room set a glass rectangle, maybe four feet off of the ground. Red velvet ropes guided the visitors around the edge of the room; no one was allowed anywhere near the case. Several security guards stared menacingly at passersby. One guard shouted and gestured to one of the guys in our group who had his hands in his pocket, while the others shushed any sort of noise.

Those who purchased flowers knelt near the rope before the glass case, praying and left their flowers on a wooden shelf. As we rounded the corner, Mao’s body came into view.

His complexion was sort of waxy and shiny; there was almost a soft glow about his figure. He was also a lot taller than I thought he would be.

And then, just like that, we had reached the exit, and he was gone.

While the actual viewing experience lasted no more than a minute or two, the whole thing was fascinating. While bit mind-boggling at first, through conversation I was able to make some sense of the situation.

With the image of Mao, laying silently behind a thick pane of glass lingering in our minds, we moved along to the Hutong Neighborhood, a much smaller, quieter part of Beijing. It was quite different from the bustling streets and impressive high rises that had previously seemed inescapable. The neighborhood was a bit touristy, as it is full of shops and restaurants, however, it is not done up like other popular areas.

The houses are separated into stone blocs, some of which surround a tiny courtyard. Many of the homes do not have a private bathroom, thus most of the community uses public restrooms located every few blocks or so.

As we entered the neighborhood we walked underneath a sort of leafy canopy, from which a series of damp, red paper lanterns hung. The air felt much cleaner than yesterday, and the cool weather was comforting.

We strolled along for a while until we reached an intersection where a long line of rickshaws waited for us. The rickshaws seemed to be custom-made, using the front/base of a bike frame and a custom-made seat and axel, welded to the back. Our driver was really nice, but a bit of a speedster. As soon as we sat down in the seat beneath the red canopy, he took off, eager to get to the front of the pack. He swerved back and forth down the tight stone alleyways, all the while playfully taunting the other drivers and laughing to himself.

Yet again, as I was riding in the back of a rickshaw on some random backstreet in Beijing, I could not believe all of this was real.

We stopped at one of the larger stone houses and walked into a small courtyard, just big enough for two round tables to seat our group. As the woman who lived there welcomed us, our guide brought out Sprite, Coca-Cola and some sort of Chinese beer, but more importantly, told us that we would be making dumplings.

Although we walked through the process multiple times, my dumpling came out as more of a rectangular shape. Our guide had been telling others that their dumplings “were not good enough,” but she said mine was great (though I think she was just trying to humor my efforts).

After a scrumptious meal we bid our host farewell and set out for the nearby Art District. We wandered around for an hour or so, admiring the artwork and checking out all of the random shops. One such shop actually sold beer/soda cans, which they had modified into speakers, and another sold beautiful handcrafted porcelain.

Ultimately our entire group ended up in a giant tree house bar/café, overlooking the entrance to the district. There was literally a giant tree coming up through the middle of the deck–definitely one of the cooler cafés I have ever been in.

We headed back to the hotel, eager to rest for the first time since we had been here.

[note: I did not realize that my digital camera does not use an SD card. I was also brilliant enough to leave the cord at home, so I’m having to make due for now. I’ll be sure to upload plenty more when I get home]