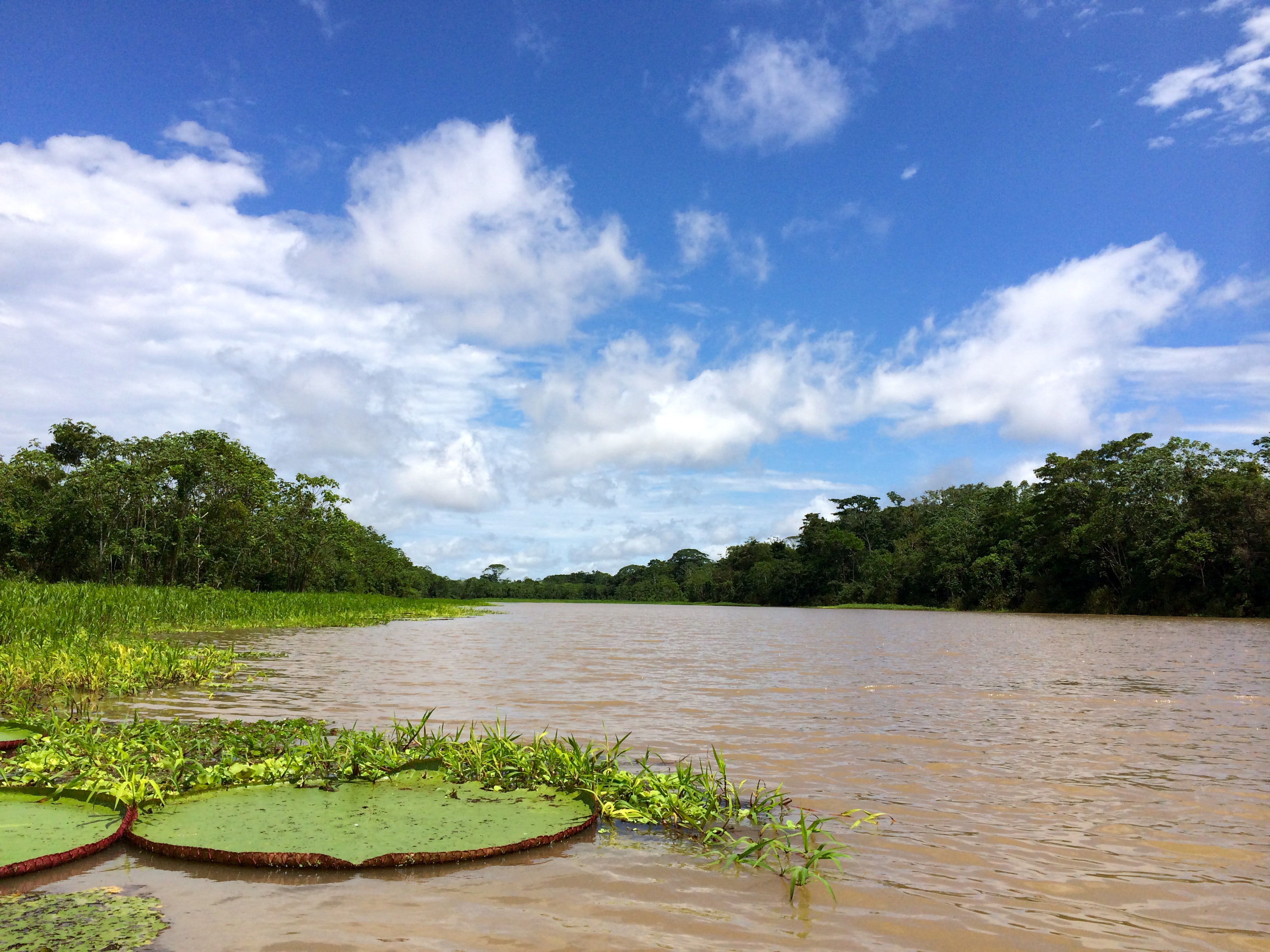 The following day we said goodbye to Cusco and boarded a plane set for Iquitos, heart of the Peruvian Amazon rainforest. From Iquitos, we traveled another four hours (by moto-taxi, car, and boat) to a community-owned eco-lodge, staked just off the bank of the river, but built a couple yards off the ground in anticipation of the heavy rainy season to come.

Rain partially spoiled our first day there, though we saw a few dolphins and got plenty of reading done; it was nice to relax after several long days of trekking. From there on we were blessed with great weather, allowing us to trek through the jungle and explore this rugged area of the world. The Galapagos definitely impacted how I viewed nature, thus I was taken aback by the rawness of the Amazon. Our guide ruthlessly hacked away tree limbs, brush and plants, picking up just about any animal that we found (all which would definitely not fly in the Islands).

Preservation and restoration do exist here though, often in more ways than one. We visited a primate reserve, where monkeys whose families were killed, or they themselves were injured by hunters, are allowed to roam free, and swing through the canopy without worrying about poachers. The lodge is owned and operated by the Libertad community, thus much of its profit goes back into the community to provide healthcare, infrastructure, and a better education system.

A local family rescued a sloth family from a group of poachers, and while I am not one for domesticating wild animals, I couldn’t pass up the opportunity to see one up close. Pablo, the dad of the sloth family, had taken a lunch break from napping in the rafters, so we got to hold him—these guys look cute on TV, but they are downright adorable in person.

That evening we decided to go looking for something a little fiercer, so we sped into the night up a small stream that cut into the bigger river in search of caimans and alligators. We spotted a couple, but most sunk into the dark, murky water as we approached.

Turns out, a few of the guides returned to that spot later that night and actually caught a small alligator in order to save it from locals who supposedly would hunt it during the upcoming rainy season. Long story short, I held a live alligator.

We awoke early the next morning to watch the sunrise before paddling through a flooded forest, full of monkeys, iguanas, birds and even a tarantula (which are normally nocturnal). After lunch, amid the scorching sun, we decided to revisit the dolphins, in hopes of better luck.

Lucky we were, as we saw plenty of breaching, pink dolphins, as well as some jumping grey dolphins. Something about these magnificent creatures is instinctively intriguing and the way they effortlessly glide through the water and launch into the air is breathtaking.

Before dinner, we strolled through the tiny town, which basically consisted of a series of houses and one primary school, situated in a rectangular fashion around a soggy soccer field. All of the houses are built on stilts in preparation of the imminent rainy season, however, even then, almost all of the community floods. Many families construct a makeshift upstairs in the rafters of the house, while moving their chickens, ducks, etc. onto the roof for a few months or even building little rafts for them.

I was able to hop in a volleyball game with some locals (the other team jokingly complained about my height and long arms), which was awesome. Even in this tiny village, it is evident that sports play a large role. I found it really interesting, and refreshingly progressive, that in a society of clear gender roles, both men and women were playing volleyball together (and the women are hitting the ball just as hard as, if not harder than, the men).

As darkness set in, we decided to take a quick walk behind the town into a series of palm ferns in search of tarantulas. While the ones that hang out on the tree trunks are relatively harmless/passive, there is still something very disconcerting about coming face to face with a huge, furry spider [note: shout out to Michelle who faced her fears and hung out with these monstrous creatures]. I ate piranha, as well as a small fruit worm in the jungle (apparently they are a local delicacy, and held an alligator, but I would not hold our big, fuzzy new friends.

After tromping back to the lodge, we sat around the dinner table, eating delicious food and conversing with awesome people from all over the world, talking about all of the crazy things we had seen that day, but also much bigger issues. One recurring topic seemed to be what is happening back home in the states right now, all of the protests, calls for justice, scrutiny of the police, etc. While I was sitting at a table with people from Belgium, Thailand, Ireland, France and the U.S., I learned that all societies have their problems. Unfortunately, there seems to be no situation, no injustice, that is unique to one place.

I am glad to have visited this unique part of the world and witnessed first hand the harsh reality of the jungle, but I think for the first time on my trip I was excited to move on, mainly because I had been eaten by mosquitos and hadn’t stopped sweating since I arrived. That being said, I am very grateful to have reached such a remote place, one most will only see on the Discovery channel. While I unfortunately didn’t see any anacondas, I did make it out of the Amazon rainforest alive and well.