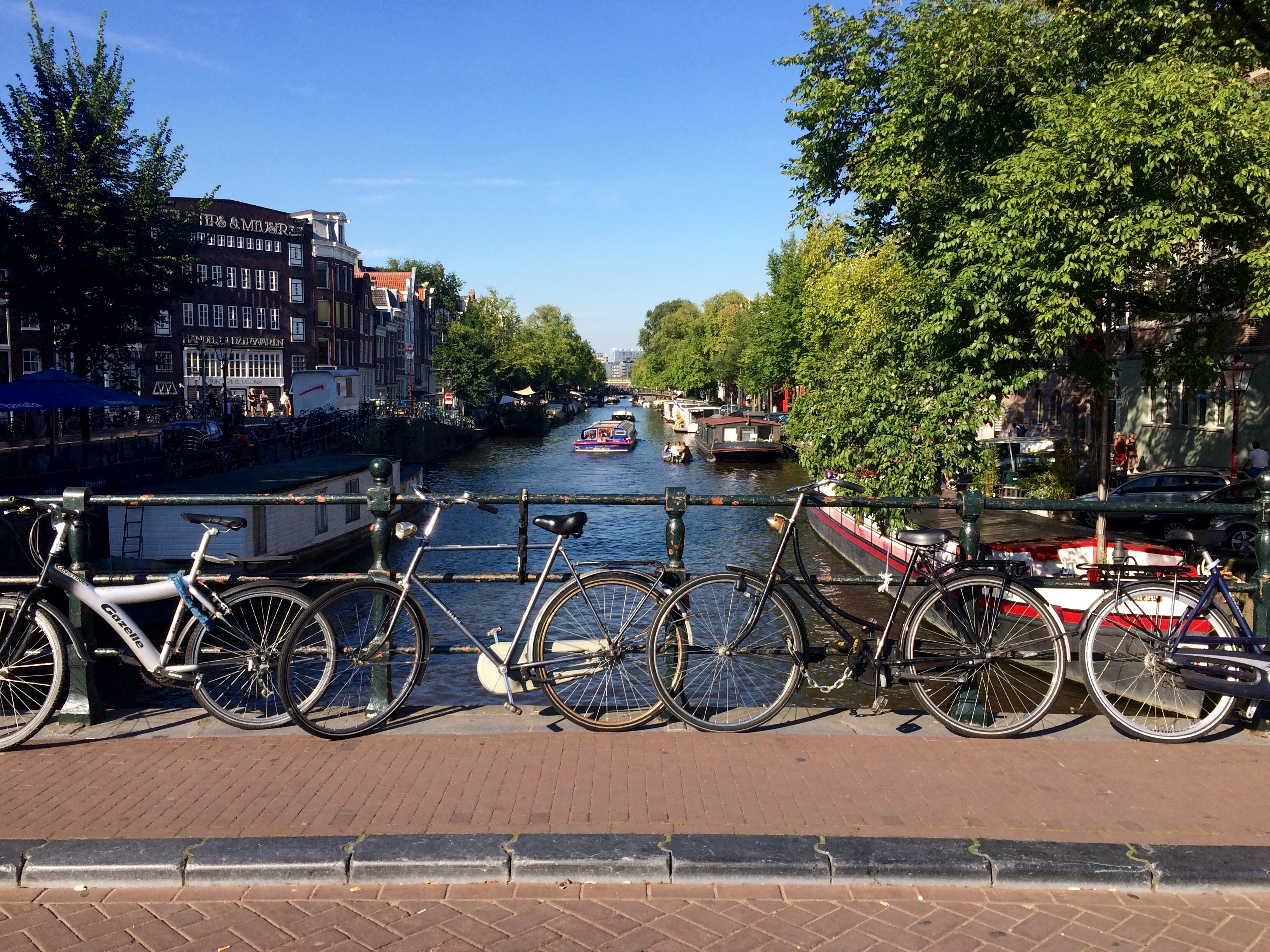 After sitting on a plane for 13 hours, I arrived at my hostel feeling like a slug, so I threw on some sneakers and headed out the door toward the Rijksmuseum. Boats of all shapes and sizes puttered by, as I walked along the canal to admire the beautiful, colorful buildings that lined the riverbanks. I came upon a majestic stone building that looked pretty important so I turned into a tunnel that ran through the middle of it and arrived at perhaps the most famous landmark in all of Amsterdam.

After taking a few touristy photos at the ‘IAMSTERDAM’ sign, I decided to head into the museum. The sunlight came streaming through the barred skylight, lathering the room in thin shadows. I wandered around the many rooms for hours, gazing at brilliant works of art and interesting artifacts, each of which helped tell the oft-intertwined story of Dutch history and art.

The museum was gorgeous, but after awhile I got antsy, so I walked back to my hostel, laced up my old running shoes and trotted out the door into Vondelpark. The weather was much hotter than normal for Amsterdam this time of year, thus the lawns were covered with people hanging out and enjoying the sunshine.

I woke up Thursday morning and walked straight into the heart of the city. The more bridges I crossed, the busier the streets got, until the narrow alley I had been walking through suddenly opened up onto Dam Square, a huge outdoor plaza, bordered by massive stone buildings, each adorned with statues, spires or flags. I took a moment to appreciate the beauty of the square, but pushed on as I was determined to get to a nearby museum hosting a special exhibit of Banksy’s artwork.

Banksy is a criminal to some, and a hero to others, not unlike most people who vehemently speak out against the hypocrisies and disparities of the world. Those who oppose Banksy see his art as vandalism (a lot of it is graffiti and street art), while those that support Banksy’s movement see it as free, liberating, public art for all to see. Regardless of your take on the anonymous British artist, it is hard to argue that his art is not incredibly powerful and relevant. Banksy discloses societal hypocrisy by way of juxtaposing violence and peace, from the view of both the oppressor and the oppressed.

I had been told that the line for the Anne Frank House can get very long, so after I leisurely absorbed all that the Banksy Exhibit offered, I bolted toward the Anne Frank House (where I found a stream of people that meandered all the way down the block). An hour and a half later I stepped out of the scorching sunshine and into a cool, air-conditioned modern room. I walked out of the new lobby and up a set of stairs into a much older house, the same house that Anne and her family lived in secret for two years.

I read Anne Frank’s Diary years ago, thus throughout my walk through the house, with each plaque that I read and story I heard, bits and pieces started coming back to me. I saw where Otto Frank’s business once kept shop, and learned what life was like for the family before WWII.

And then I saw it.

I had envisioned what the bookcase looked like, but little did I know that I would one day step through the secret door and up the steep stairs to the hidden annex. The whole experience didn’t feel quite real, perhaps because I was in a line of tourists throughout the entire exhibit, moving from one artifact to another, that I didn’t have as much time as I wanted to reflect on what I was experiencing. At the end of the museum, there is a video playing that highlights sentiments from celebrities and normal people, around the globe, who speak about the impact Anne Frank has had on the world—it is particularly inspiring to see how powerful her words continue to be, acting as a reminder to always learn from history and use these teachings to prevent future atrocities.

When I left the house, the line still stretched nearly all the way down the street. I passed over canal after canal, until I reached a building with a familiar red star atop. I expected the Heineken Experience to focus a little more on how the beer is actually made, but it was mostly one giant advertisement for the brand. That said, they’re pretty good at advertising, given that the tour concludes at a swanky rooftop bar overlooking the city. I sipped on a cold beer with a couple nice students I met from Toronto—we talked about Drake, hip-hop music, and traveling as the sun began to set on an amazing day.

I wandered into Leidesplein to grab a quick bite to eat. I strolled up and down one of the main streets, until I came upon a Greek restaurant. It was mostly empty, but Mediterranean food sounded good so I perused the menu. An older, animated man came hustling out from inside the restaurant waving his arms, telling me to sit down. I hesitated, as most of the food wasn’t as cheap as I had hoped. I think he sensed my hesitation because he grabbed my water bottle and told me he’d be back with free cold water and bread. I took my seat and ordered the chicken pita. The man stood next to my table, attempting to woo other travelers into the restaurant, but as time went on and as his luck seemed to dwindle, we began chatting. We talked about his son, who lives in San Francisco. We talked about traveling, about the importance of communication. We talked about life, as he taught me an ancient Latin proverb that roughly translates to, “out of something bad, comes something good.” When it was finally time for me to go, I tried to tip my new buddy as he was an excellent waiter and a fantastic orator, but he refused and pushed my hand away. “You’re a student,” he said, “keep it. Come back here again someday when you are successful, and you can tip me then.”

I had a couple things I wanted to do on Friday, but the day was mostly consumed by readings and prep work for my study abroad program in Ghana, as well as doing laundry (a crucial piece of traveling). I managed to squeeze in a final run through Vondelpark before heading to Uitmarkt with a couple people who were staying in my dorm. Uitmarkt is a free, local music festival, a few blocks from where I was staying in a beautiful square next to the Van Gogh museum. We walked around, made new friends, ate delicious food, and enjoyed the music. I really liked one particular band called, “Steffen Morrison.” Overall, it was the perfect way to end my time in this pretty little city, surrounded by good music, gorgeous architecture, and people from all over the world.

The following day, after a relatively short flight, I paced around the familiar halls of the Barcelona airport, through which I walked with Cahill four years ago. However, this time I was not at the end of my journey, but at the very beginning. As I approached gate D16, I heard a recognizable sound coming from a group of teenage boys wearing matching polo shirts and warm up gear. As I got closer, I noticed one of the boys holding a large silver trophy, and that recognizable tune was now unmistakably, “Set Fire to the Rain” by Adele blaring out of the one boy’s mobile phone, while several others sang along. Turns out they had just won the Youth Super Cup against Northern Ireland.

The flight attendant called everyone to the gate to start boarding. As I stepped onto the airplane, the flight attendants inevitably spoke Spanish to me (which happens to me a lot when I travel). I took my seat, buckled my seatbelt, and leaned my head against the warm window.