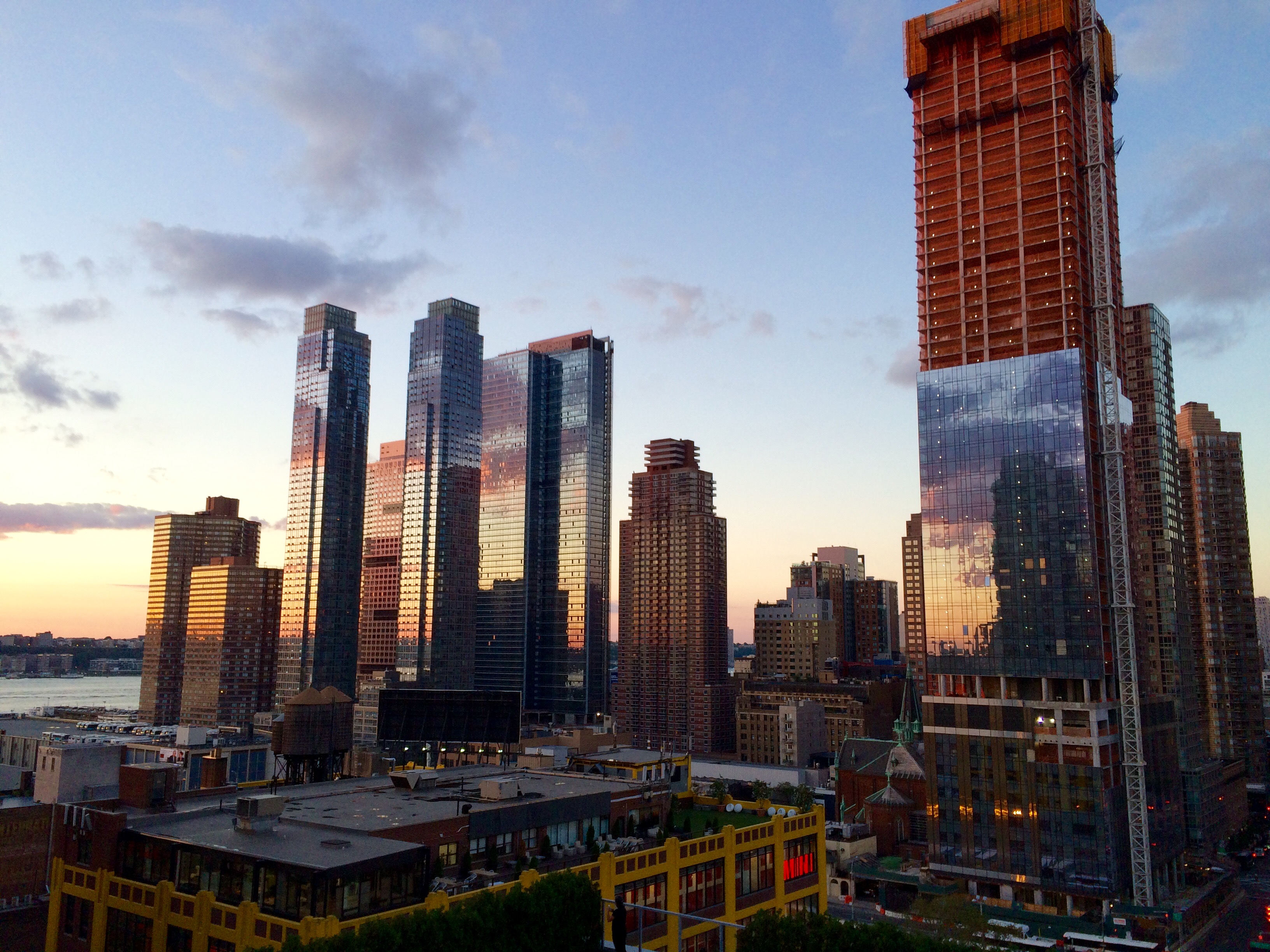 It felt weird, but at the same time, exciting.

The last time I saw Max was September 17th, 2014. He dropped me off at Sea-Tac before the sun had even gotten out of bed. I took the first step on my adventure out of his golden Kia Optima, thus I couldn’t wait to get a glimpse of his adventure.

I stood in a humid valley of steel, entrenched between several modern sky rise apartments. The warm rain seemed to hang in the air, leaving the concrete jungle of Manhattan in a muggy fog.

Both wheels on my suitcase broke as they bounced up and down the tumultuous sidewalk and I was hot and sweaty, but I could not have been in better spirits. Max appeared and gave me a big hug. It's a funny thing, friendship—two friends can take entirely opposite paths to entirely opposite corners of the world, yet when they are brought together it is as if no time has passed.

After grabbing lunch with Max and Brad, I wandered around Midtown, gazing up at the Empire State Building and trying to take in the moment.

I’ll never forget where I was on this day, 14 years ago.

I was in fourth grade.

I woke up and wandered into my parents’ bedroom, yawning, still half asleep.

It was a normal Tuesday.

I had my first double-digit birthday coming up in two weeks.

Little did I know the world was about to be changed forever.

After a night out on the town, I awoke early to catch a train. Just as I found a seat, the train car jolted and we were off. After several minutes of darkness, sunlight flooded through the windows and I found myself looking across the water, back at the majestic cityscape. The ride was smooth and upon arriving in Kingston, Rhode Island, Claudette joyfully greeted me.

We took a drive up to Newport, a gorgeous seaside town, which also happens to house the International Tennis Hall of Fame. After learning more about the game and a nice stroll along the cliffs, we set our sights on Naragansett.

My perception of the East Coast changed drastically on this trip and I think a large part of it has to do with spending time with people who have real lives here, as opposed to staying in a hotel as a normal tourist. One night after dinner at a Chinese restaurant, we (casually) decided to stop by Times Square on the way home and ended up watching part of the US Open Final on the massive screens. Where else in the world can you do something like that?

Outside of the city, I also didn’t anticipate such beautiful natural spaces—the beaches in Rhode Island are incredible. I love playing tennis and eating delicious seafood in that tiny state. Everything about it is so quaint and adorable. [note: Thank you to Claudette and Jacki for having me!!]

Claudette and I arrived back in the city just in time for Max’s birthday, but before dinner I stopped by the Century to meet some of Claudette’s pals. As I walked up the grand old staircase I could hear what sounded like a small Broadway performance coming from the library. As I walked into the dimly lit room, lathered in dark wood, leather chairs, and bookshelves, Claudette excitedly motioned me over to the piano.

After a momentary break, a new tune started up and the group was off again. A Broadway pianist effortlessly laid down a new melody and everyone else (impressively) belted the lyrics while sipping on fancy cocktails; usually when my friends and I listen to music in a circle standing up, Future is playing through speakers and we’re drinking cheap beer.

The rest of the trip was brisk but awesome. Max’s friend Crowley got us tickets to an Eagles vs. Cowboys game in Philadelphia. Philly fans lived up to their reputation, and I could not have been more excited about it. I saw one guy buy two beers and then fall asleep standing up in front of the counter, while holding said beers, right next to a group of ~15 people furiously smoking cigarettes beneath the giant “NO SMOKING” sign. I got to catch up with old friends, those I’ve known since I was little, and those I had met in Zambia merely months earlier. We even went through a drive-thru beer store in Manayunk.

I looked over Manhattan and talked about life with one of my best friends. I made new friends. And connected with old ones. I got to watch a game in Yankee Stadium, in which Alex Rodriguez hit a homerun. I partied on a rooftop overlooking East Village. I befriended hilarious deli workers and even funnier doormen, and even a few professional sportswriters. I strolled along the cliffs of Newport with my wonderful Godmother. I saw a world-class music performance and randomly found myself in the Oil Painters of America gallery. I ran up the same stairs Rocky did, with my fists clenched high above my head, hollering out “Adrian!!” in my best Sylvester Stallone voice. I learned that I barely caught a glimpse of the East Coast, but hey, that just means I have to go back.

I think it is only fitting that I led off with a piece that I never posted as I sit here in that same airport, anxious for what lies ahead. The last year has been crazy, crazy enough at least, that I am just now finishing a blog I wrote 11 months ago. I finished my first year of my master’s in Human Centered Design & Engineering. I re-joined forces with the incredibly talented people at Utrip and am doing what I can to help build our company. I’ve gotten to meet some pretty amazing people that live their lives with humility and courage. I have experienced some of the best moments of my entire life over this past year, and, unfortunately, some of the worst.

But lucky for me, my “worst” is still much better than most. And I recognize that. And want to do something with the opportunities that I’ve been given.

Two years ago I wrote a piece encouraging you all to “find your stage.” I’ll be the first to admit that I’m still trying to find mine. We all are.

On the note of finding stages, when I got back from my Bonderman Fellowship, I thought to myself, “I wonder if I’ll ever do something like that again?”

While I’m not taking off for 10 months again (only 5 short weeks), I am hopping out of my comfort zone and on a plane to Amsterdam, where I’ll spend a few days strolling around the canals before I head to Ghana to participate in an exploration seminar studying communication technology and development! I also get to hangout in Lisbon for a few days on the way back with my buddies, Max and Henry.

I’m excited and nervous and exhausted, all at the same time. I’ll be writing as much as I can, so feel free to follow along!

Adios Seattle. I’ll be back soon.