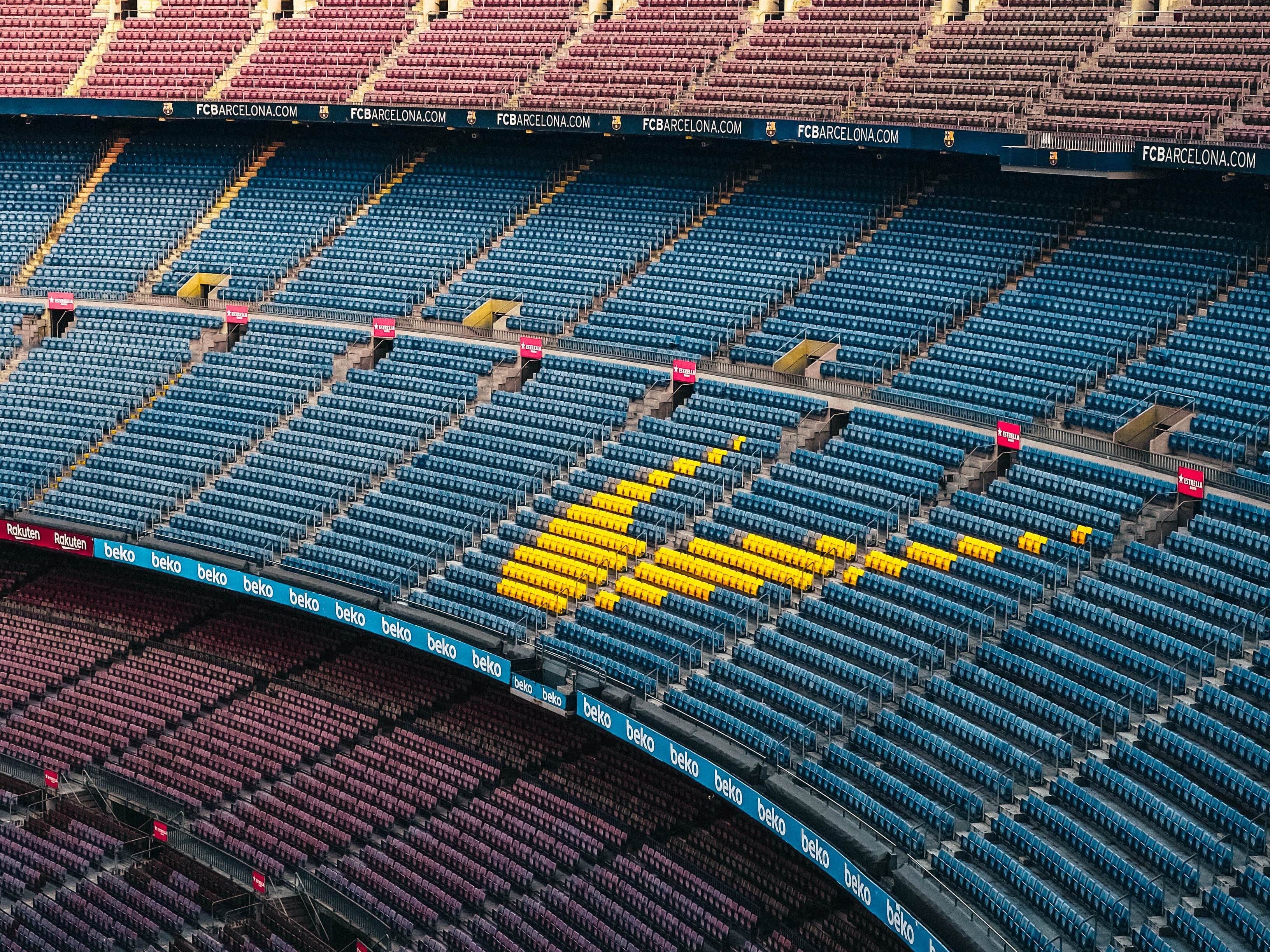 Yesterday was my favorite day in Barcelona thus far. We went to Park Guell in the afternoon, which was built in the early 1900’s and designed by famous Catalan architect Antoni Gaudi. The architecture was very rounded, and of light color; The archways and buildings reminded me of giant sand castles. It kind of felt as though we were walking through ‘Adventure Land’ in an amusement park. Reed and I hiked to the very top of the park to a large cross made of stone, perched upon a jagged, rocky staircase. The view was absolutely awesome. Every direction you looked, the city, coated in a hazy mist from the sea, seemed to stretch on forever.

A few hours later, following our excursion to the park, we headed out the door. Our next destination: Camp Nou, home to one of the best soccer teams in the entire world, FC Barcelona. We walked down into the hot, stuffy metro tunnel and proceeded to the stadium with many jersey-clad fans.

Thankful for fresh air that didn’t smell like feet and beer, we got off at our stop and walked a couple blocks to the stadium. We came around a corner and stopped to stare an immensely large, grey block of concrete and glass. We had arrived.

The atmosphere was incredible. There were masses of people everywhere. We found a small restaurant/bar, got some food and drinks, and sat down in a square full of locals. We soon noticed that nearly every guy in the square was tatted. A large man standing right in front of us had the FC Barcelona emblem tattooed on his right leg, and a baby (most likely his haha) wearing a Barça jersey. We counted at least four ‘UEFA Champions League’ tattoos. I then noticed a young man wearing a #10 Barça jersey, though the name on the back did not read “Messi” (arguably the best soccer player in the world right now), it read “Dios,” meaning ‘God’ in Spanish.

I had fully realized that we were currently sitting among an FC Barcelona firm. [side note: ‘firms’ in European soccer are essentially gangs of fans. They live for soccer (‘football’); Their purpose is basically to antagonize and fight supporters/firms from opposing teams.] Sure enough, another guy turned around to reveal a jersey which read, “FCB Hooligans.” Being that neither Reed nor I are currently in an opposing Spanish football firm, they paid no attention to us, though it was an interesting experience.

We left the square and walked swiftly over to the gates. Minutes later we were inside the stadium. We were overcome with excitement; walking through the tunnel to our seats, which opened up to a view of the entire pitch was breathtaking. We sat at about midfield, a few rows back in the second level of seats. The view was impeccable.

The stadium began to fill up as the opening kickoff loomed. Within several minutes Carlos Puyol, a center back for Barça, scored a header off of a corner kick. Real Sociedad, in their blue/white striped jerseys, struck back quickly, tying the game at 1-1. However, in only the 10th minute, and then again in the 15th minute, Messi showed why he is the best of the best, adding 2 goals to Barcelona’s tally. His touch on the ball is ridiculous; he moves so effortlessly, shaking defenders left and right, and then striking the ball past the keeper. After each goal, most of the crowd bowed their arms as if in praise. Messi is larger than life here.

15 minutes into the game and we had already seen 4 goals. Incredible, but Barcelona didn’t stop there. Crisp passing and quick touches allowed FCB to score again in the 41st minute. A little of halftime, the home crowd, enjoying a comfortable lead, started doing “The Wave,” which for those of you who don’t know originated in Husky Stadium. Go Dawgs. This was one of the few times that the crowd imitated an American sporting crowd; Camp Nou wasn’t as loud as a Sounders or Seahawks game, but every single fan there understood and deeply cared about the game. Most chants and yells came at the most appropriate times.

When it seemed as though the game could not get any better, FCB called on Spanish striker David Villa to enter the game in the 74th minute. The crowd went nuts, for Villa had not played since he fractured his tibia last december.

No more than 10 minutes later, David Villa scored, which incited the crowd into a loud frenzy. Villa meanwhile ripped off his jersey revealing a black t-shirt which had a picture of his family and read ¡¡¡Imposible Sin Vosotras!!!, “Impossible without you all!” He then ran over to the sideline and hugged the FCB trainer. He walked back onto the field, graciously took the yellow card he was given for removing his shirt, put his jersey on and continued playing.

Then, suddenly, the final whistle blew, and our experience at Camp Nou had come to a rather abrupt end. We filed out of the stadium, crammed onto the nearest metro train (which was even hotter and smellier than before haha) and went home.

Definitely of the coolest experiences of my entire life.