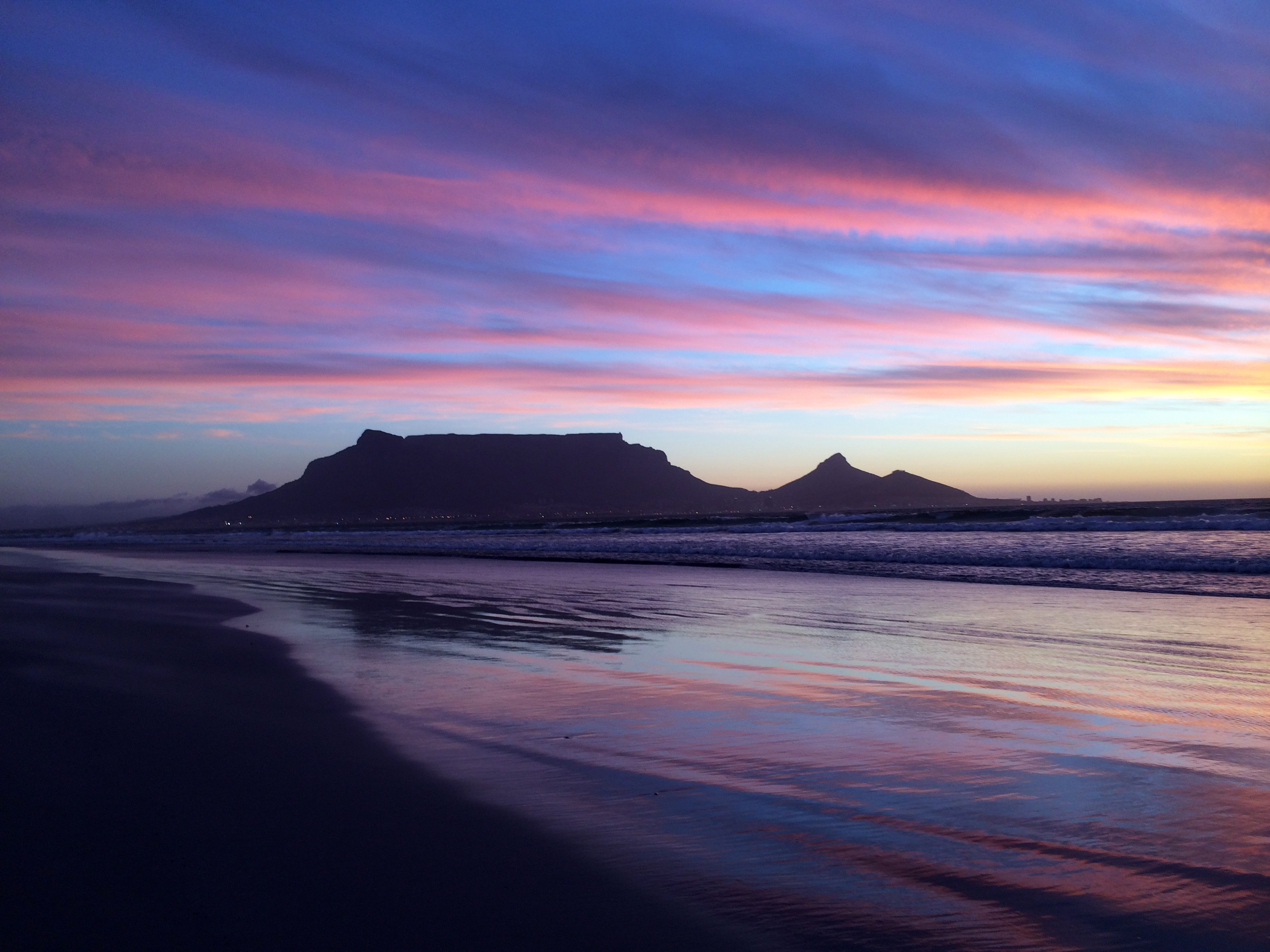 As the plane swung low over the cape, a dark rectangle shape appeared in the distant haze—Table Mountain, though slightly hidden by lingering smoke drifting from neighboring wildfires into the city, was in sight.

I made it. Phase two, of my adventure. I had always dreamed of coming to Africa and here I was, wandering around Cape Town, South Africa. I took an afternoon to acclimate and then headed straight out to Robben Island, which is now a museum and place of remembrance, but once housed a maximum-security prison and plenty of political prisoners.

Exiting the harbor, we were treated to a magnificent view of the Cape Town ‘City Bowl,’ the metropolitan area tucked below Table Mountain and Lion’s Head/Signal Hill (I thought people were talking about a bowling alley for the first 48 hours of my time here). The only comparable experience I had was visiting Alcatraz, but as we approached it became evident that this place is much larger. In fact we boarded buses to zoom around the main sights of the island. I sat next to a man named Itu, who is from Johannesburg, but is planning to quit his traditional business job to start a produce farm. Our tour guide seemed like she was having a bad day, plus Itu’s camera wasn’t working, so Itu and I spent most of the tour reflecting on what we were witnessing and I became the tour photographer.

We passed the lime quarry, where the prisoners were forced to toil for 8+ hours a day; a place where human beings were once reduced to numbers. Today, a pile of rocks lies where the entrance once stood to symbolize the power of the human spirit and its ability to overcome.

Once off the bus we were able to enter the maximum-security prison and meet our guide, Kgotso, who served seven years on the island for his involvement and affiliation with the ANC and anti-apartheid activities. Kgotso was a friendly, warm guy, and spoke with such conviction and charisma. He talked about the terrible things that happened on the island, what it was like to spend time in the tiny, windowless solitary cells, and then with a sly smile, disclosed the prisoners’ sources of information: “…new prisoners,” he chuckled, “and sympathetic guards, whose names will never be revealed for they trusted us and we trusted them.” Kgotso also played in the Robben Island Football (soccer) League, whose governing council served as kind of a trial run at establishing a governing body, as those incarcerated knew that someday their time would come to lead this nation.

We walked through a maze of tall walls and barbed wire fence into a narrow hallway of a smaller compound. One of the cell doors was open, and a thin mat lay in the corner beside a tiny table. The cell once belonged to the late Nelson Mandela, who served 18 years (of his 27-year sentence) on the island.

As we approached the pristine V&A Waterfront, packed with tourists flocking to its fancy shops and restaurants, the whole experience seemed surreal. The last political prisoners were released from the maximum-security prison in 1991, the same year that I was born.

The following day I decided to hike up Table Mountain, the iconic backdrop of an equally iconic city. It was a blistering hot day, but we set up the steep stone steps anyway. Several hours later I was standing atop Cape Town. On one side the urban metropolis crept up the coast, while clouds spilled over the coastal peaks on the other.

I wandered around the ‘Gardens’ neighborhood, passing through Company’s Gardens park, and the Slave Lodge. Today the lodge is a museum dedicated to remembering the tragedies of slavery, and prompting society to fight ongoing slavery around the world, but it once was the very place where slaves were imported, held, and sold (ironiclly, it also later housed the supreme court).

Before I left town to relax near the beach for a few days I awoke at 4am and stumbled outside in the dark, hopping into a shuttle fan before I fell asleep for a couple hours until we reached our destination: Gansbaai (aka the great white shark capital of the world).

We stepped into a neat, tidy building where a movie was playing on TV depicting Mike Routzen swimming freely with great whites. Photos of Brad Pitt, Orlando Bloom, Matt Damon, Mark Wahlberg, etc. adorned the walls. We would not be doing any free diving today, but rather doing so within a small metal cage attached to the side of a boat.

The swell seemed pretty good sized as we rolled up and down on the way out of the harbor. The boats do not feed the sharks, however they do chum the water—while it seems harmless and in the name of science and nature conservation, I feel as though luring a wild animal to a mechanical craft is probably not ecologically responsible. That being said, I have always wanted to see a great white shark up close.

I clambered into my thick wetsuit, cinched my snorkel mask, and slid into my section of the cage. The water was ice cold. I was nervous. And shivering.

At the word of the guide we were to release our knees and push ourselves underwater to the bottom of the cage.

“Down!” he shouted. I couldn’t see a thing. The visibility was terrible. Unable to hold my breath very long in the frigid water I popped up.

Several meters out in front of me I saw a fin of a two-meter long great white. Unfortunately that is the only thing I saw due to the poor weather conditions, but I saw one nonetheless.

While I was hoping for more, I can’t complain, as I am very lucky to have even had the opportunity to get in that cage. Having since watched the video of the whole ordeal, the shark actually touched the cage; we still just couldn’t see it. Bottom line, I was able to witness one of my favorite animals, in the open ocean.

I have been very fortunate and met plenty of amazing people along my journey. One such person is Gavin, a member of room 343 on our Antarctica ship, who so graciously allowed me to crash at his place in Cape Town while he was out of town. There I met Jeffrey, a kind man from Malawi, who talked to me about soccer and his life.

Prior to heading to the other side of the country I came back into the city where I met Teriann and Lauren, two cool Australian girls. We hiked up Lion’s Head, which frankly was easier and way more fun than the constant stone steps of Table Mountain. When we reached the top, we sat down and enjoyed the amazing view while talking about travel, South Africa, etc.

South African history is still very recent and very raw. The country has a lot of glaring problems, mainly due to existing racial tension and inequalities. I am by no means disparaging all of the amazing people I have met here—everyone has been so friendly and welcoming. I’d also like to acknowledge that the U.S. has plenty of our own problems, many of which similarly are linked to racial tension and inequalities.

South African is beautiful, gorgeous, stunning. Yet it is broken, divided, blemished. Not unlike many parts of our planet.

I’ve learned that they don’t call this place the Rainbow Nation for nothing, as I have met people from Zimbabwe, Democratic Republic of Congo, Malawi, Israel, Germany, Zambia, as well as plenty of locals. South Africa and its people are truly beautiful. I have a hard time picking favorites, but without a doubt this is my favorite country I have been to on my adventure thus far.