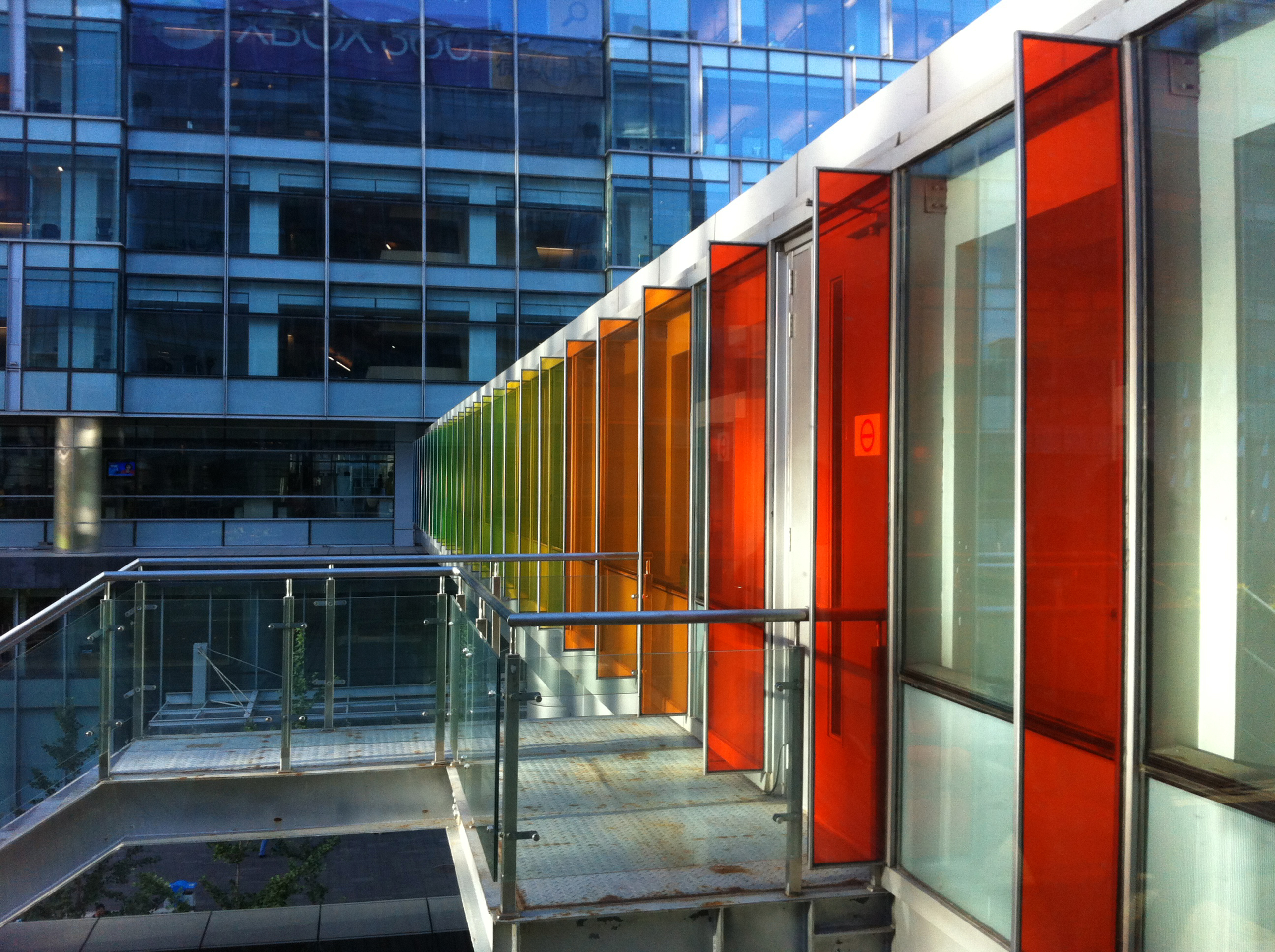 Baidu’s campus is much more typical of a Silicon Valley tech-firm, consisting of several huge glassy buildings set in a park-like area. The lobby was much more impressive than that of Amazon, though the security was a bit more hostile.

We were reprimanded for taking pictures of the Baidu logo, illuminated on the wall, and sitting incorrectly on the couches, though that did not detract from the overwhelmingly impressive atmosphere.

As we peered up at a video screen that showed a map of China, overlaid by the terms people were searching for throughout all parts of the country, our host for the morning appeared and strode toward us.

Kaiser Kuo was born in San Francisco, CA and attended UC-Berkeley, after which he decided to start a Chinese metal/rock band. And so, Tang Dynasty was born.

The group soared to success; their first album, A Dream Return to Tang Dynasty, sold over 2 million authentic copies. Two different musical breakups, a brief stint at grad school, a shortly longer term as editor for the Red Herring, and a new band (called Spring and Autumn) later, Kaiser has found himself as director of international relations for Baidu (a company often described as the ‘Google’ of China).

Though he now works at a cutting edge technology firm, Kaiser continues to pursue music and fit the rock star part. He had long dark hair, nearly down to his belly button, and wore a plain black t-shirt and jeans. He greeted us with a warm smile and showed us to Baidu’s sleek, dark black room with all kinds of screens and gadgets on the wall. The room looked like something out of Minority Report.

He spoke quickly about the history of Baidu, only pausing to reflect on this “rare ass day” in Beijing (referring the smogless, blue sky outside). I learned that the founder of Baidu, Robin Li, actually received his patent before Google’s founder, Larry Paige, did and in fact, Paige’s patent makes multiple references to Li’s patent.

Google would actually later invest several million dollars into Baidu and even later, attempt to acquire the company for around US$2 billion. Although Robin’s mom wanted him to sell the company, he had other plans (Baidu is currently worth approximately US$45 billion).

Kaiser continued on in his calm, surfer dude/musician voice, explaining that the goal of Baidu is: “To be the best and most equitable way for people to find what they’re looking for,” as he showed us into Baidu’s product demo room. Here we were able to witness the company’s products first hand.

Baidu aims to connect users as directly as possible to whatever they are looking for, thus using Baidu’s search engine, you can play games, listen to music or watch TV, all within the search results and without visiting an actual website.

Thanks to differing copyright laws and government involvement in business, Baidu Music has deals with all of the major record labels, allowing any user to legally and freely download just about any song.

Baidu Maps is very similar to Google Earth, except for the fact that you can virtually go inside commercial buildings (businesses, restaurants, etc).

Though the product that wowed the entire crowd was a simple iPad app that takes a picture of a person’s face and determines their “celebrity look-alike.” While the results are not totally accurate, they are pretty dang good.

We met with Kaiser in a small conference room for a lengthy, very intriguing Q&A session. He spoke openly and freely, which was rather refreshing and exceptionally captivating. He is by far one of the most articulate and well-spoken individuals I’ve ever had the opportunity of hearing speak. In a matter of hours, I’m pretty sure he had convinced our entire group that: a) Baidu was the greatest company on the planet and b) when attempting to make sense of everything we are seeing, to think outside of the box.

After an awesome dialogue, Kaiser finally had to go, but not without some closing words: “China’s going to matter.”

After lunch we dropped by Peking University, which has become popularly known as the, “Harvard of China.” Two Peking U students, one of which is actually going to be studying abroad at the Foster School of Business next winter and spring quarter, greeted us and escorted us to a classroom in the business school, where we were lectured by an esteemed economics professor.

He pulled up the title page of his powerpoint, which consisted of three bullet points, the first of which read: “A 2000 year history of the Chinese economy”...we were in for a long lecture.

The lecture was a bit dry, but fairly interesting. The professor explained historical trends of the Chinese economy, the impact of various social demographics on economies, and the economic impacts of China’s “aging problem” (an effect of the ‘One Child Policy’).

The presentation definitely seemed on the ‘safe’ side. No radically new or controversial information was presented. The name “Mao” was not mentioned once and when the GDP per capita and life expectancy dropped severely in the late 1960’s the professor explained it as a “phenomenal famine caused by economic policy.” He also was speaking about neighboring countries, mentioning several, including “Taiwan,” which he awkwardly rescinded: “I cannot say “Taiwan” is a country...Sorry.”

Yet again, I felt like I was on an episode of Vice. The presentation, though factually accurate, seemed rather dodgy and intentional.

After Cleopatra, a fun, peppy USC grad, and a Beijing resident of a few years now, beckoned the professor to end his presentation several times, the two PKU students stood in front of our class to engage with us as peers.

We spoke back and forth, talking about the kinds of classes we take, what we want to do after school, etc. Finally, Michelle attempted to shift the conversation away from academics, being that we wanted to know what life is like for college student outside of school.

There was a pause, as the pair digested the question and prepared an answer.

Jennifer answered first, “I am a part of several business committees, in which we read the newspaper or journals and analyze and discuss them.” Zoe, had a similar answer, essentially saying that she was involved with business case competitions, etc.

The pair also liked to read, but said that boys play some sports and computer games as well.

Attempting to pry a little harder, one of the other girls in my program asked, “Who is your favorite American (celebrity, politician, activist, athlete, etc.)?”

Though the two agreed that if they had to pick a celebrity it would probably be Michael Jackson. As our conversation continued we learned that the purpose of a high school student is to study, in hopes of passing the university entrance exam. Now that both women are in college, they still study about 6-8 hours per day.

I, along with the rest of our program, was shocked. Maybe that’s the reason the American education system ranks 13th in the world.

We ended our stay with a short walk around a small lake on the Peking campus. As we stood near the edge of the water, a Chinese man and his son approached me. He pointed excitedly to a camera, then to me, then to his son and himself, and back at the camera.

The next thing I know, I was in a full-fledged photo shoot, the man on one side of me and his son on the other, in front of this lake. After a few pictures with the two, I took more with his son and then a couple more with his son and daughter (I think she was his daughter). It was an odd scene.

Our next stop was Microsoft China, which is situated in two tall, dark towers, connected by a colorful sky bridge. We entered the building and were directed into a large, tiered presentation room. Before any sort of presentation started, we were told that we would actually be going straight to the product demo room. We watched a short video about Microsoft’s voice recognition/translation software, and then were let free amongst a room full of Microsoft games and devices. After playing around for a while, we were passed off to a different woman who would give a tour of the building.

The tour was a bit awkward, especially the part where we walked through a small gym of employees running on treadmills and working out. We also managed to see just about every restaurant/cafeteria/food service area within the building, which was rather unfortunate, and slightly humorous, being that our group was quite hungry after a long day.

As we walked outside, I don’t think anyone was sure what had just happened. We never saw any actual workspace, nor did we receive any information about the company.

I am extremely grateful that Microsoft opened their doors to us, and while the facility was very impressive, yet again it seemed that our intentions were lost in translation, coining a popular phrase amongst our group: “This is China.”