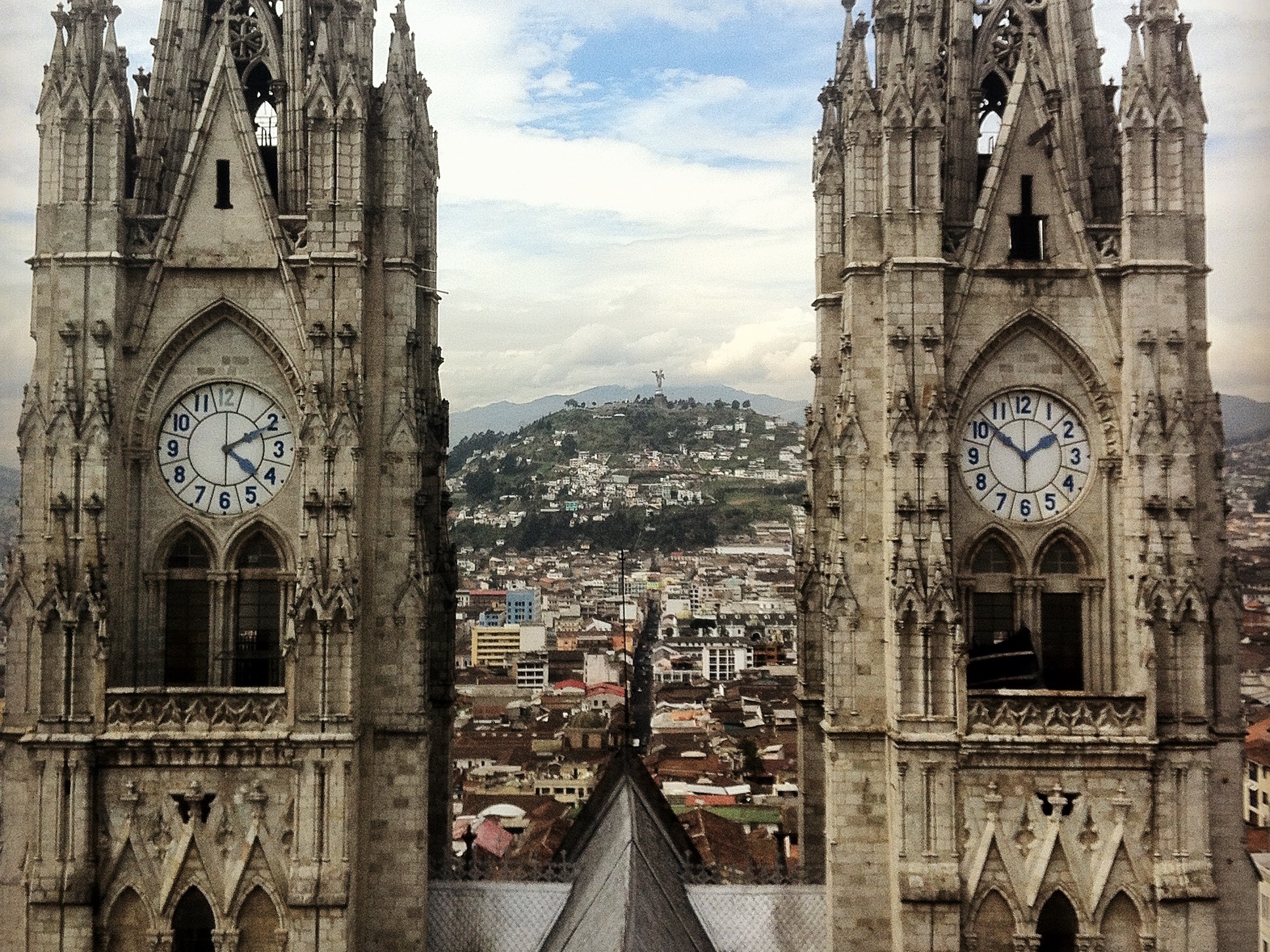 The following day I went on a free walking tour, where I met a cool Swiss guy named Mladen, who quit his job in IT to travel the world. People keep thinking we’re brothers because we’re both tall and have beards—it’s pretty funny.

We walked through the local market and enjoyed delicious fresh juice. I got mora (which is a kind of like a more flavorful blueberry) and coconut. We moved through several large, open plazas and then into the Plaza Central. In the middle stood a tall obelisk (honoring those that fought for the liberation of Ecuador), which is surrounded by four buildings, all belonging to either the government or the church. One of these buildings just so happens to be the Presidential Palace, so Obi, our guide, spoke briefly with one of the guards and the next thing we knew, we were inside.

The President no longer lives here, as on several occasions Presidents (both sitting and former) have been killed while leaving the building. That being said, the President frequently works there, though he now travels by helicopter. We passed by several amazing churches, tasted some Ecuadorian candy, and stopped at a point that looked up onto the hills and El Panecillo (the large aluminum statue that overlooks the north central end of the city). Below us, what is now a spotless, friendly urban park, used to be the city’s black market. We then wandered through La Ronda, a bohemian, artsy district. Prior to stepping into one of the metal art workshops, Mladen and I stopped to play foosball with some kids in the middle of the narrow street.

Moments like these are why I love to travel. These moments are simple. They are spontaneous. They are beautiful. They are what I will remember years from now.

The next day we decided to walk over to the Basilica de Voto Nacional, a massive gothic, stone, structure, situated in the middle of town. When we reached what we thought was the top, we found ourselves literally inside the clock tower. This was pretty cool, but there was more. We ultimately climbed up several steep ladders to a small outdoor platform atop one of the towers, providing us with a panoramic view of the sprawling metropolis.

Oh, and I bought a sweatshirt with llamas on it. It’s pretty sweet.

The following day, we hopped on a shuttle to the Secret Garden Hostel, near the legendary Cotopaxi volcano. As we neared the remote hostel, the landscape actually resembled that of Eastern Washington (lush, open countryside, tucked in between the sides of a dark rocky valley, lots of farmland, etc.), except for the fact that we were surrounded by nine active volcanoes.

Upon reaching the cozy hostel, we headed out for a hike to some nearby waterfalls, after which I walked around the grounds for a bit admiring the llamas and the stunning scenery. This place is truly one of a kind.

My brother, Sam, and I grew up watching a particular Warren Miller film called ‘Fifty’ in which they hike up Cotopaxi and ski back down. Therefore, I have known about this mountain for about ten years.

I have always been intrigued by the legendary Cotopaxi, and there I was, about to hike to its glacier the next day.

Four of us climbed into a small, white pickup truck, with our Ecuadorian guide, Henry. After a decently long drive, we passed through the entrance to the National Park and began speeding across a grassy plain, dotted with dark, sizable volcanic boulders. We made our way up the road to the parking lot, grabbed our packs and started up the loose volcanic ash.

At this point, we were at an altitude of about 4500 meters, thus 10 steps felt as though you had just sprinted across a basketball court. We moved slowly up the steep, brown earth, which almost had the consistency of powdery snow.

When we reached the first resting point, I turned around, peered down the sandy trail and out onto the surrounding plains, which looked like they had literally been colored with pastels.

As the air got thinner, we got colder. In fact, about halfway up, thick fog swallowed up the magnificent views, and snow began to fall. By the time we reached the refuge structure (about 4800 meters in elevation), the snow was really coming down, blanketing parts of the reddish Earth.

Minutes later we had finally reached the glacier and stood triumphantly 5000 meters tall (more than 15,000 feet). We took a few pictures and stared up at the tranquil, yet powerful mountain.

Suddenly, a boom of thunder ripped through the quiet air. Our guide told us we had to hurry, as we did not want to get caught in a lightning storm on top of a mountain. We took off nearly running down the mountain. It was still dumping snow, which had mixed into the soft dirt trail, so it looked as though I was dashing down a giant mountain of cookies and cream ice cream.

The adventure wasn’t over, however. Once we cleared the fog, we unloaded mountain bikes from the pickup truck and took off down the rocky road (which unfortunately didn’t resemble ice cream this time). Just as we reached the bottom, the skies parted for just a moment giving us one last glimpse of the fabled mountain.

The rest of the weekend was very relaxing. I rested and met some awesome people before heading back to Quito to start Spanish school.

A bit difficult to find, the school is tucked behind, a small, unmarked wooden door on one of the busiest streets in the Old Town. While my Spanish is pretty decent, I have definitely gotten better over the past week. I have been taking both group and individual classes; the one-on-one lessons have been excellent, as they are more conversational and tailored to my interests, areas of improvement, etc. My teacher and I spent most of the week talking about business and sports; more specifically about the power of soccer (fútbol), on a cultural, economic and global scale. We also talked a lot about the cultural differences between the U.S. and Ecuador (and South America in general). Perhaps one of the most interesting, things that I learned was that the idea of an “opportunity cost” doesn’t really exist here. People dedicate time to work, and they dedicate time to family; typically, family time is not compromised for work. I don’t think either way of life is “more correct” than the other, they’re merely different ways of doing things.

Sure, I am learning a lot, but school is not without its humor. The funniest part of the school is the video store right across the street, which blasts music videos or TV all the time. For some reason, they have been playing the same WWE Smackdown (or whatever its called) John Cena video over and over again, every day. For those not familiar with John Cena and his obnoxiously awesome entrance song I highly recommend you check out this YouTube video. I’m not kidding, horns blaring and everything, John Cena was introduced by some Spanish announcer to a bustling Quito street every 15 minutes or so.

I have said it once, and I will say it again, I love Quito. It has so much to offer, and is full of wonderful surprises. On our way back to our homestay from class today, Mladen and I happened upon a small crowd circled around a man crouched over what at first glance, looked like a dirty piece of paper. Upon closer inspection, the man was finger-painting some of the most amazing pieces of artwork I have ever seen, with gasoline. Within minutes, he was churning out amazing paintings, which would easily sell for hundreds of dollars in the US, yet cost a dollar each here on the street. I stood there mesmerized by the quick flicks of his fingers, building thatched roofs and smoothing out the reflection of the moon on the water. Though I am not entirely sure how I will get it home, I bought one of his pieces. This was truly a moment I don’t think I will ever forget.

Today, I channeled my inner-Dance 100 skills and took a salsa class. It was not only entertainingly difficult, it was really fun (I’m actually going to go back tomorrow after my last Spanish class). While I’ve learned a lot, I am excited to see what’s next. I should be in the Galapagos sometime next week. Hopefully going to get to a soccer game this weekend. I’ll be sure to keep you all posted.