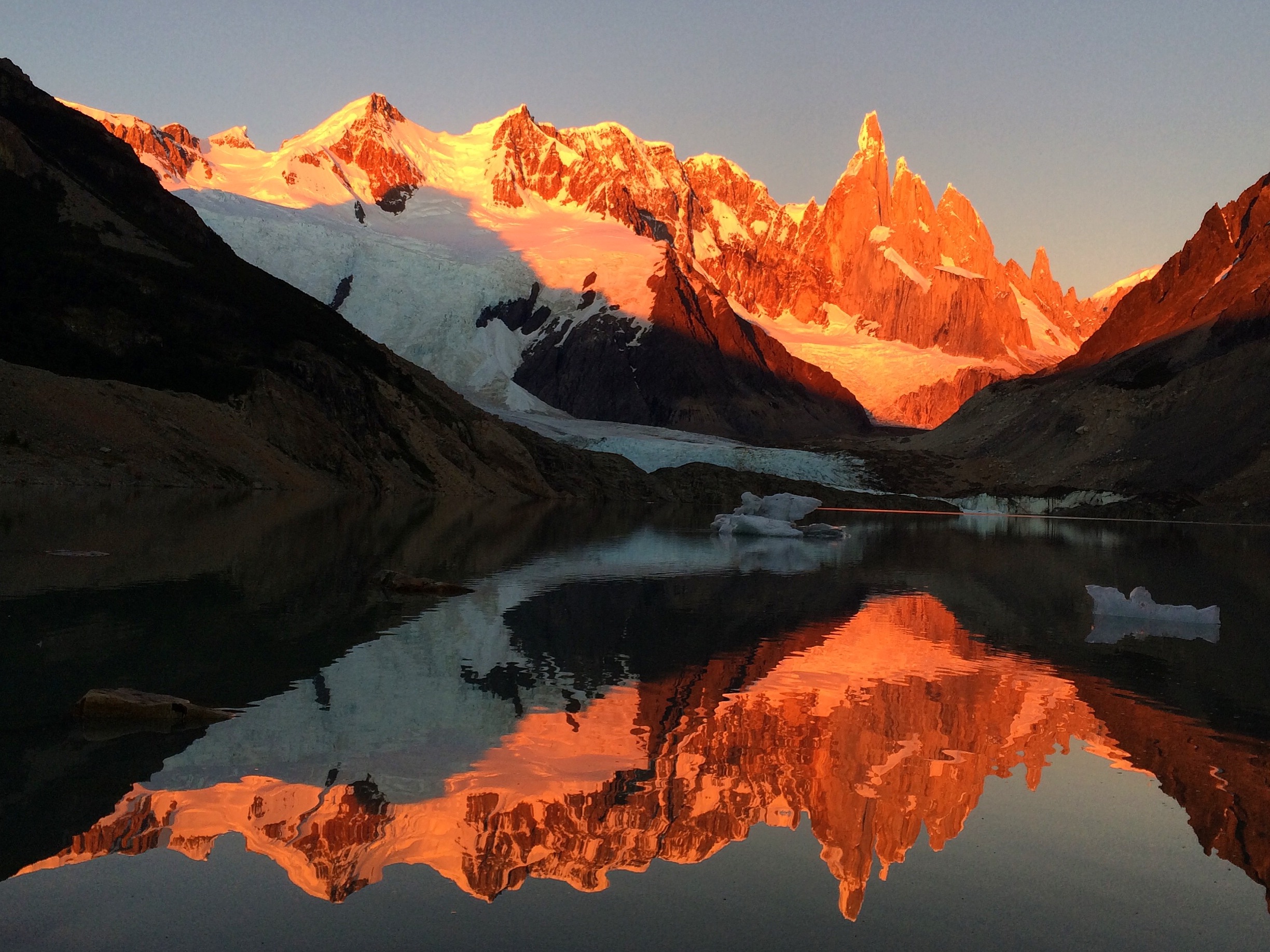 Far along the left side of the horizon I saw a large greyish, snowy capsule protruding from the surrounding greenish mountain range. Normally this area is known for its long dreary cloud-filled days, but yet again, I had lucked out.

As the bus came around a bend in the shallow turquoise river, the little town of El Chalten revealed itself. Wedged in between a steep rock face and a jagged range of mountains, El Chalten is rather charming. Everything is within walking distance and while it is crawling with tourists, it has somehow maintained the vibe of an authentic mountain town. I settled into my hostel, bought some groceries, and then set out for a short hike up to several lookout points.

For the first time in about a month it felt like “summer,” as the heat beat down on my back while I climbed the rocky hillside. At the top, I was greeted by magnificent, stark white mountaintops above the picturesque townscape.

I sat up there alone for quite some time. Thinking. Dreaming, Letting my mind wander, until I myself wandered back down the hillside and into town.

I found out that one of my buddies named Ryan, who is a year younger than me at UW, happened to be in town as well, so I grabbed dinner with him and few interesting international characters he met along the way. I also ran into Nic, from my Torres del Paine team; it was an awesome dichotomy among friends I had lived with for a matter of days in a forest and another I lived with for three years in a city.

The following morning we rented a tent and made our way up to Cerro Torre. The hike was absolutely gorgeous—we walked through a lush valley, surrounded by toothed mountaintops and an unprecedented amount of sunshine.

We arrived at the lake, which was filled with small icebergs and then made camp for the night to catch the sunrise in the morning. We awoke early and crawled out of our warm sleeping bags into the cold, crisp mountain air. Fumbling around for my headlamp, I gathered up my things and walked down the path to the lake.

Surprisingly, we had the place to ourselves. The sun began to creep over the mountains behind us, casting a beam of light on Cerro Torre and its rocky companions. The peaks began to glow red, reflecting perfectly on the calm water below. While we may have missed such an effect at Torres del Paine, this would definitely do. I have been able to see many amazing things on my trip, but this was hands down one of the most remarkable.

We sat there in peace until the red glow had dissipated and the mountains were fully soaked in sunshine. I was able to snag a few more hours of sleep before I decided to branch off by myself on a separate connecting trail to a different hike, which leads to Laguna de Los Tres, below Mt. Fitzroy. It was a long day (over eight hours of trekking) carrying a heavy backpack, but the views from the lake were worth it.

I spent a few more days hanging out in El Chalten–the small town has a sort of Lake Chelan vibe to it as it is plenty touristy, yet it is mostly filled with ‘local tourists.’

I have reached a point in my travels at which traveling has become living; almost five months into my adventure, this lifestyle has become somewhat “normal.” Unintentionally, I started listening to almost strictly Seattle hip-hop/rap about two months ago, as no matter where I am in the world, it brings me right back home. Consequently, I have really grown to appreciate how much talent exists in our city; it’s incredibly inspiring and makes me want to chase my own dreams.

For me, music has re-energized my desire to write. I never stopped loving writing, but as I think more about what I want to do when I get home, my mind had wandered away from writing. Coming into this trip, it is described as “solo international travel,” and while that may be so, lately I hardly ever find myself alone. There are just too many awesome, friendly, outgoing people down here in Patagonia to feel total solitude. While I don’t want to ostracize myself, I do want to make writing (outside of my blog) more of a priority moving forward.

I have been in Ushuaia, Argentina for nearly two weeks now; when people ask me how long I have been here, I typically respond, “too long.” It’s not that I haven’t enjoyed this town (it is surrounded by lovely mountains, forests, and water), there’s just not a whole lot to do.

The first morning in my hostel, I sat down at the breakfast table next to a guy and a girl that looked to be either Canadian or American. I asked them how they were doing and where they were from, “Seattle,” they replied in unison. Turns out they are from Auburn, and Bayly dated one of my friends from high school, Olivia, in college. Small world.

I spent the rest of the day trekking through Tierra del Fuego National Park. It was a great day, full of cool people, good conversation, and lots of walking.

But just when I thought the world couldn’t get any smaller, I received a message from another Bonderman Fellow who is currently in Santiago, Chile because she randomly met the friends I made when I crossed the Ecuador-Peru border back in October!

While I have bounced all around the city staying at different hostels, I found a part-time home at Cruz del Sur hostel. At this point, all of the staff knows my name. I play with the big fuzzy dog everyday. I (unfortunately) watched the Super Bowl here, lying on the floor in despair after the game. I fell into a decent routine of running/working out, which was a nice change of pace from trekking. And I met some awesome people from all over the world. Though because I have been here so long, I have seen almost all of them come and go.

There was a German man, whom we nicknamed “National” for he looked like he came straight out of National Geographic or the Indiana Jones movies. [For the record, he fully embraced his nickname.] There were the English guys, who were hilarious. Two awesome Israeli sisters joined in our adventure through the national park. There was Amanda and Jessica, two sisters from England, and Charlotte, from France, with whom we made a delicious dinner and explored the town.

Last night, Marco and Rodrigo, two awesome guys from Brazil, decided to throw an unofficial BBQ at the hostel. They prepared an absolute feast–it was seriously one of the best meals on my trip.

Halfway through dinner, Jared (my new Canadian buddy) encouraged Rodrigo to make an announcement–apparently hours before, Rodrigo had received word that he had passed all his exams and had officially become an attorney. The small crowd cheered, as Rodrigo humbly thanked everyone.

“We are the United Nations,” Marco joked, as our makeshift outdoor dining room must have represented ten or so different countries.

It was a perfect ending to my time here. I came to Ushuaia looking for a last minute deal to Antarctica, but have made many friends along the way.

Looking back on my time here, if someone asked why I stayed so long, my answer would be, “for moments like that”…and the fact that I managed to find a boat, and tomorrow, I’m living out my dream and going to Antarctica!