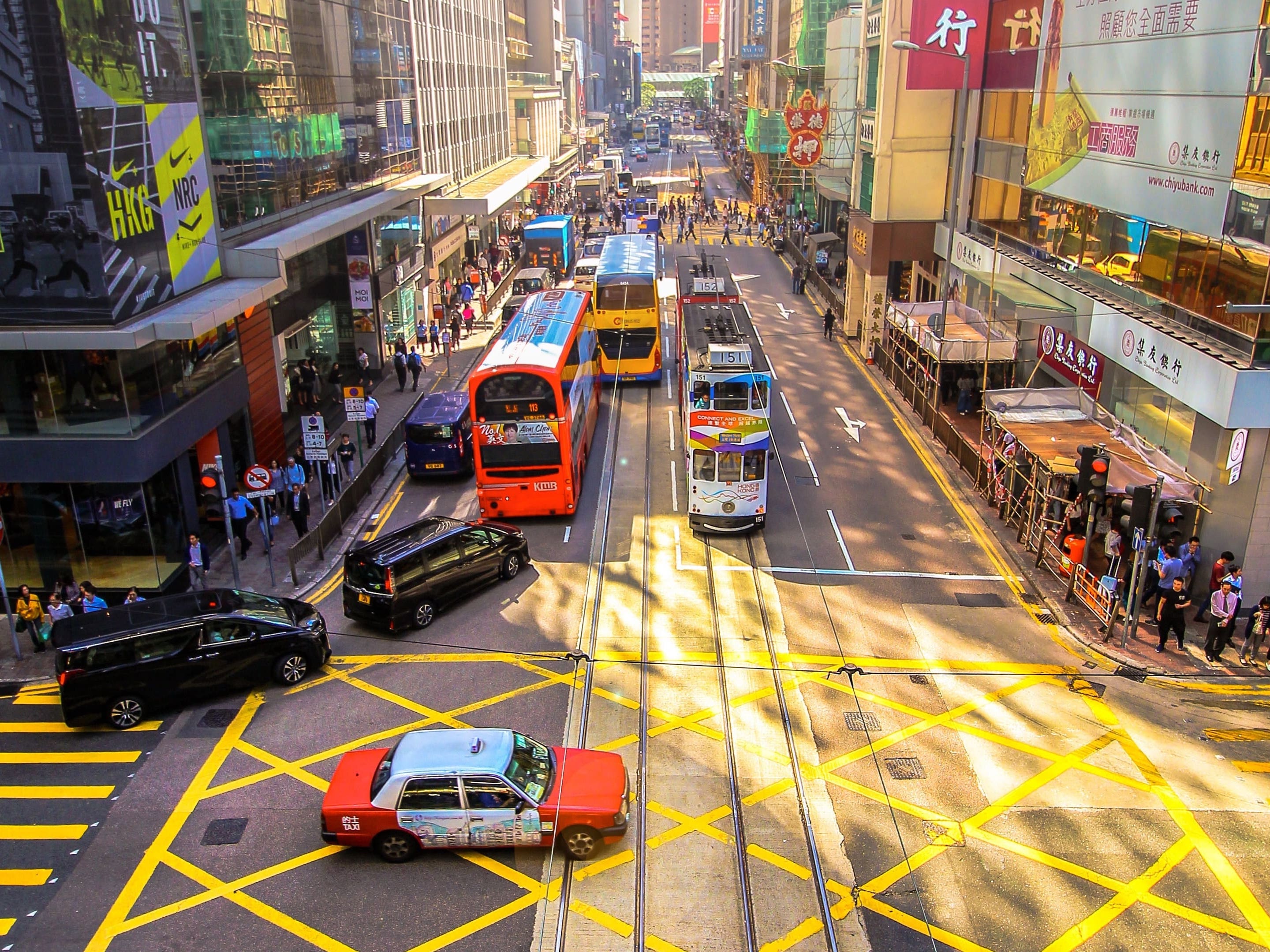 We arrived in Hong Kong in the middle of a torrential downpour; I don’t know if I’ve ever seen it rain that hard in Seattle before. Our bus pulled up in front of the hotel, essentially in a large puddle. We splashed across the sidewalk to get undercover, as the hotel employees told us that they would unload the luggage. One of the men seemed to be more in charge than the rest so he stood in the rain talking loudly with the bus driver. He returned to us and said, “The crew was going to wait until the rain subsided to unload the bags.”

I’ve lived in Seattle my entire life. I don’t remember the last time that I carried/used/purchased an umbrella, so I put my rain jacket on and walked out into the storm to grab everyone’s luggage. Shaosong joined me, at which point the hotel staff realized that they did not look extremely hospitable standing dry undercover while we unloaded everything. They jumped up to help, while the head employee began shouting at the top of his lungs at the driver.

Shaosong burst out laughing, translating what the man was screaming. Basically the driver was refusing to move the bus closer to the curb or get off the bus to help. While I won’t repeat what he was yelling here, I can tell you that the man was livid.

He was shouting at the driver during the entire process. Once we had all of the bags out of the bus, he looked down at a large black bag of garbage on the sidewalk next to a trash can. Without hesitation he grabbed the bag, where it was knotted towards the top, with one hand, and in a singular fluid motion flung the bag as if he was tossing a grenade or a low hook-shot into the luggage area beneath the bus and slammed the door.

Shaosong was nearly in tears he was laughing so hard. The man turned around and put on smile as if nothing had happened.

The rain did not let up so we decided to cab to Hong Kong University. We met a group of students for lunch at a delicious seafood restaurant not too far from campus and then walked back to the business school, where we sat down and spoke with a larger group of students (who were mostly freshmen and sophomores). Simply by walking around the campus and talking to a few people, it was evident that HKU was much more “westernized” than PKU. While academics remained the priority, things seemed a bit more relaxed, and frankly more fun (for lack of a better word).

The woman that I spoke with was from Mainland China, thus she was able to compare the two coexisting cultures and education systems. While the conversation was intriguing, the most fascinating moment of the entire day occurred when one the students in our group asked the girl what a certain large, red statue, in the courtyard signified.

The statue was tall and featured a series of people stacked on top of one another, as if struggling to hold each other up.

Even at the University of Hong Kong, a place of intellectual thought and studies, where freedom of speech is protected and exercised, this student would not elaborate.

I could not believe it.

Still trying to digest what I had just witnessed we wandered around the damp campus a bit more before boarding a bus back to our hotel in TST.

That night a few us headed up to the 40th floor of our hotel to the rooftop patio, which looked out over all of Hong Kong Island and the surrounding bay. The lights were dazzling and shown bright over the water.

We sat down on some benches looking out over the city and enjoyed the breeze. For perhaps the first time on the trip we were not rushing somewhere. We did not have an itinerary. There were no horns honking, no gross smells.

There was nothing but peace, quiet, and a beautiful view.

The next morning we were welcomed back into reality by the pungent smell of some sort of cheese mixed with traditional Chinese food in the lobby, and a large crowd of people. I’m not entirely sure what was causing the smell, but there is no way that a majority of the hotel guests could tolerate that smell.

We set out for Pacific Textiles, the company my buddy Parker and I researched last quarter.

We met with one of the original founders of the company. There are four main steps in the clothing industry: yarn, fabric, garment, and branding

Pacific Textiles operates within the fabric sector, creating fabric from yarn and then selling it to other companies, who use it to actually produce items (garments) of clothing (which then have brand names, logos, etc. attached to them before they hit retail).

While the presentation was pretty interesting, the presenter was uncomfortably candid. He made me feel the shirt he was wearing after I asked if he wears clothes that are produced from his fabric, which was kind of funny. Then he made several racist and arrogant comments, that ultimately left a sour taste in the mouths of our group.

That afternoon we stopped by PCCW Global, a company focused on connecting internet users around the globe through means of broadband, fixed line, mobile and TV. While Pacific Textiles was brutally honest and open, PCCW Global (they made sure to say “Global” every time) was more reserved and rehearsed.

Prior to a rather flashy introduction, they apologized for the size of the decently spacious room, saying that they “wanted to make sure that we had the best view in the house” (the view over Hong Kong Island was pretty spectacular).

The presentation was pretty interesting; it is crazy how intertwined and connected the world is becoming. Then all of sudden, almost in an attempt to make sure the crowd had been won over we were showered with gifts. We were told that each of the brand new, leather PCCW Global business portfolio pads on the table were ours to keep, and that they had given all of our headshots to a caricature artist – the results were pretty entertaining, yet there was more to come. The next thing we know we were being escorted outside and across the courtyard, into a classy, journalistic themed bar called ‘The Newsroom,’ for a PCCW Global-sponsored happy hour. We sat down in our own corner of the bar with our hosts and were told to order whatever we wanted. Pretty easy (and successful) marketing if you ask me.

The entire experience was surreal, and definitely not a bad company to end on.

That night Michelle and I had dinner with David, a family friend. The food was incredible and David had plenty of interesting things to say about the city, as well as China as a whole. As I have said before, I feel like I learn something new everyday. [note: David if you are reading this, thank you again for dinner! We had a really nice time]