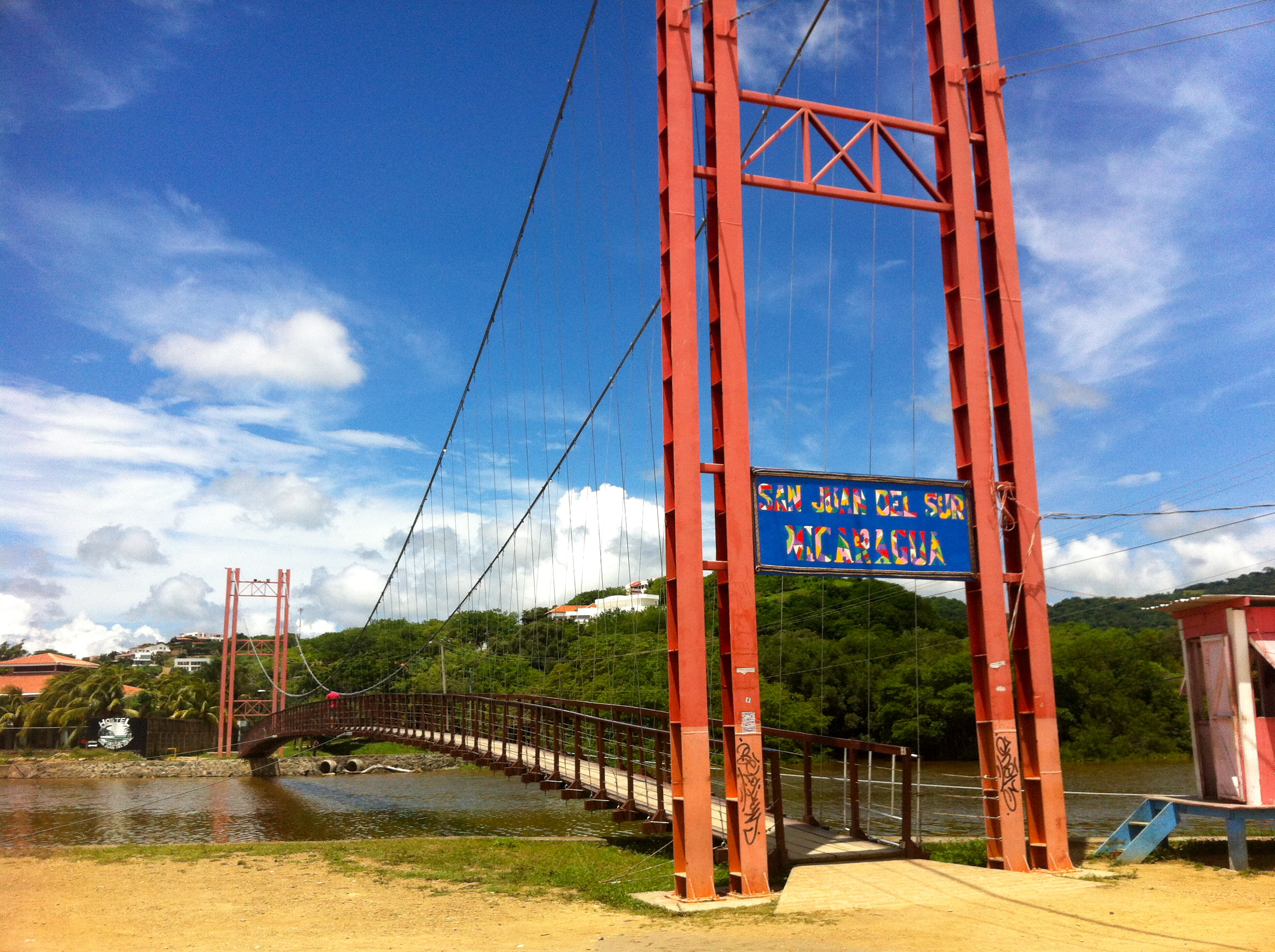 I strolled out onto the hot sand of San Juan del Sur and looked up at a huge stone statue of Jesus (similar to the one in Rio de Janeiro), that peered out over the city, as if guarding the sleepy, little fishing bay.

I wandered down the beach by myself, taking in all around me, pondering my next adventure, reminiscing on what I had seen and whom I had met thus far. Speaking of people I had met, I ran into my Irish friends yesterday, who greeted me with a booming “Go Seahawks!”

I kept on down the beach, past a bunch of resorts and a suspension footbridge that looks very similar to the Golden Gate Bridge, and up onto a steep, paved road, that zigzagged its way up through a series of mansions and lush greenery.

Finally I reached the top – I peered out in awe over the entire bay and then farther up the coast. The water was a deep turquoise, and stretched all the way to the misty Costa Rican coastline, allowing me to sit in peace.

A few days ago, my parents randomly ran into our good friend (and former “manny”) Michael and his wife, Olivia, in Paris, all because they had decided to go get some ice cream.

It’s funny how little, seemingly trivial decisions have much a much greater impact on our lives than we realize. Afterwards, Mike gave me three pieces of advice:

I thought particularly about #3 as I sat below this gigantic statue, yet above what seemed like the rest of reality. Consistently, whenever I feel down, something amazing happens. Something picks me up.

The next day before departing for La Isla de Ometepe, I happened to meet Alex, a UW grad who started Pacha Mama (arguably the most well-known hostel in San Juan del Sur). He left corporate America behind after the 2008 financial crisis and ended up meeting his future Nicaraguan business partner in a hostel while traveling.

We ended up chatting for a good 15 minutes or so, about his business and how it has evolved, an emerging middle class in Nicaragua and the various projects he is involved in around the community. Currently he is helping to rebuild the local health clinic, but he is also involved in local youth sports leagues, women’s shelters, etc. And to think, simply because I wore my UW shorts that day, I ended up having an awesome conversation.

Ometepe is a gigantic island in the middle of Lake Nicaragua that houses two massive volcanoes; it looks like it belongs in Jurassic Park.

On the way to the ferry terminal in San Jorge, I noticed a pickup truck, with literally hundreds of chairs stacked in the back. Apparently being in the ‘chair delivery’ industry is quite profitable in Nicaragua because whenever anyone has any sort of get together it is customary to ensure that you have a seat for every single guest. Who knew?

I sat down on the stiff, warm wooden bench on the musty ferry, as the loud motor churned at the water, attempting to pry itself from the land. Mexico was playing Nicaragua in Little League baseball on a tiny, fuzzy television set, so I sat down with some other men and entered the conversation. My friend in an Oakland A’s cap at the bus stop some two weeks ago was right, seemingly everyone in Nicaragua loves baseball. One guy’s favorite team was the Boston Red Sox, while the other’s was the LA Dodgers. The Dodgers fan spoke nearly perfect English. Turns out he grew up in LA, but left the states for one reason or another. Now he lives on Ometepe, working as a chef–really nice guy. He helped a few of us backpackers navigate the swarm of taxi drivers that came spilling onto the boat as soon as we docked.

I shared a cab with a couple other people over to Santa Cruz on the other side of the island. By the time we arrived it was dark, but in the morning I awoke to an incredible view. Volcano Concepcion (the bigger, and active, of the two on the island) was framed by a sloping forest and a baby blue sky, filled with puffs of white clouds.

I rented a bike for a few hours and took off down the road toward Ojo de Agua (“Eye of the Water”). While the road was paved (kind of), I thought the rickety bike was going to fall apart at any moment. Nevertheless, I came around a long bend, and found myself face to face with Volcano Concepcion, the active, traditionally shaped volcano. I don’t know how many times I’ve thought to myself, “this isn’t real life” while on this adventure, but this surely was one of them.

The cool, natural springs of Ojo de Agua were refreshing and the rope swing was pretty sweet. After I had cooled off I headed back down the road by myself, peddling like a maniac in a hopeless attempt to escape the scorching heat.

I got up early this morning, as today I was going to climb Madeira, the smaller, more forested volcano on the island. As we clambered up a trail toward the entrance of the park, our friendly guide, Harold, gave a us a quick Ometepe history lesson (currently it has 47,000 residents, but the first inhabitants came here 4,000 years ago), and showed us some 2,000 year old petroglyphs.

We started up the rocky trail, which would only get rockier (and muddier, and steeper). We made it up to an awesome lookout, however, at this point Harold gave us a choice whether we wanted to keep going (which he said wouldn’t be fun, as it poured last night so we would be trudging through deep mud into clouds – meaning we wouldn’t be able to see much) or turn back and go to another eco reserve. We decided to head back, which ended up being really cool because as the hike got easier, Harold opened up in conversation.

He commented on the state of Ometepe, stating that tourism has greatly improved the quality of life on the island. For example, there used to be two schools on the island and now every town has its own school. There are still plenty of problems, one being sexual education (for context, Harold’s wife has 64 siblings).

Sure, there are problems, but Ometepe is also nearly self-sustaining. Almost all of the fruit, dairy and meat products come from the island or the lake. Unlike much of Nicaragua, there is a recycling program on the island, the animals look much healthier and in general, the people have a much greater respect for nature.

We finished our hike only to learn that we missed the bus, and another one wouldn’t be coming for another 2 ½ hours, so we hopped in the back of a truck with a soccer team, clad in Bayern Munich jerseys.

Regardless of what I am doing, I am learning something everyday. I am so incredibly grateful for this opportunity. Just before I left I sat down to enjoy the cool morning breeze, I stared out over the volcano, which had nearly been swallowed clouds.

Ometepe, it was a pleasure.