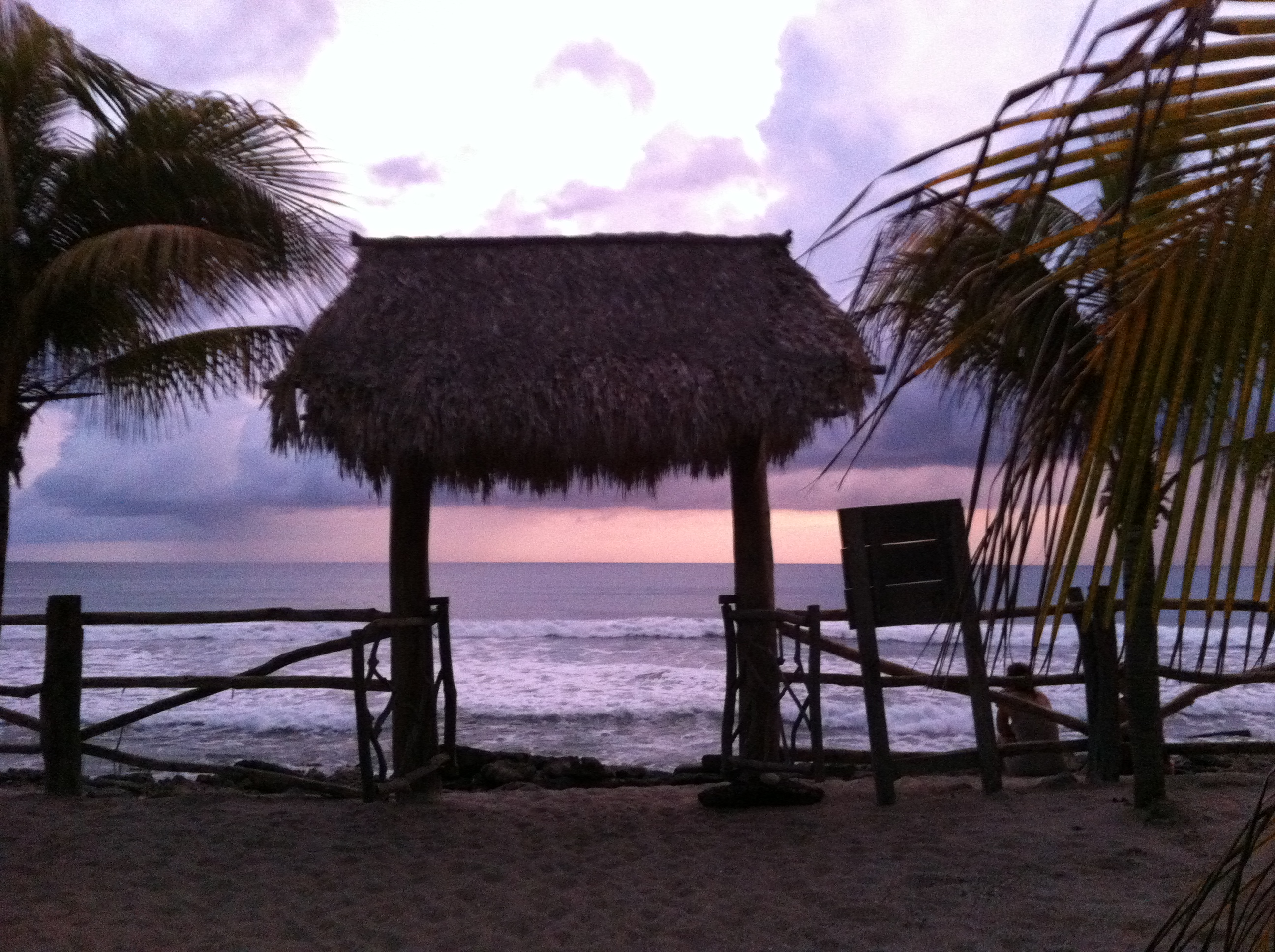 I wrote and read by myself for a while the next morning before we packed up our stuff and hopped in Brayan’s truck and drove over to Laguna de Apoyo, a clear, deep blue crater lake that was created by a natural volcano implosion.

The ride was bumpy, but the water was as clear as any I have ever seen (it was also one of the warmest lakes I’ve swam in).

Some locals swam a big, buoyant log over to us, so we thanked them and then all hopped on to paddle farther out. This is beginning to feel less and less like real life.

After swimming, Brayan gave us a ride to Paradiso Hostel further up the lake. We bid farewell to our new friends and then hopped down the stone stairs to check in. It was getting dark so we decided to clean up after a few days in the forest (a tree house can only be so clean) and then grab some dinner at the cool, thatched roof restaurant just above the beach.

We met these awesome English twins named Tom and Kristie, among some other interesting characters. If I ever make it to Manchester, Tom said he would take me to a Manchester United game! The whole traveling mindset is really refreshing. Most everyone is open-minded, kind and genuine. My world has truly expanded ten-fold in the past week, as I am growing and thinking all of the time. It is incredibly freeing not to worry about homework, for example, and instead, live in the moment and appreciate the beautiful intricacies of say, a doorway.

I also met a German couple that night. When the guy asked me where I was from, I replied, “The U.S.” (I hadn’t told him what state or city mind you). He leaned back, smirking and nodding his head up and down, as if he was really excited about whatever he was about to tell me, “Detlef Schrempf,” he said approvingly.

Needless to say we talked about the Sonics for the next 20 minutes or so.

The next morning I ate a delicious omelet and jumped in the lake one last time before heading back to Granada. From Backyard Hostel, I got in a bus with my new friends, and a small group, which included a handful of Irish guys, who would become my new, new friends.

We boarded a small boat and embarked for Las Isletas, a group of small islands just outside town that were created when the volcano erupted 100,000+ years ago. Led by Evan, one of Tim’s friends from Peace Corp, the short cruise was fascinating. [note: Evan is also a part of camafina.org, a really cool microfinance NGO aimed at improving public healthcare in Nicaragua]

Some of the islands are inhabited by locals that still survive almost entirely off of the lake, while others are owned by Nicaragua’s “1%”, which have helipads, jet skis and beautiful mansions built atop them. While the average Nicaraguan makes a few dollars per day, these people are multi-millionaires. The disparity of wealth in this country is insane.

One island, popularly known as “Monkey Island” is the product of a veterinarian’s experiment who wanted to see if he could increase tourism, and improve the local economy, by putting monkey’s on an island. Turns out, it worked. When we stopped for a bit on one of the islands, I learned that some of my new Irish buddies were huge NFL fans – they’ve actually been to a couple preseason games in the states; one guy even takes work off on the Monday following the Super Bowl.

Finally we stopped at a squat, stone fortress, which served as a lookout against English pirates (including Captain Morgan), to watch the sunset.

Kay’s mom (Susan) picked us up the next day to take us down to her hotel in Las Salinas (about 45 minutes North of San Juan del Sur). We stopped briefly at the markets in Masaya, which unfortunately smelled like fish and raw meat. I did get to practice my Spanish though. I talked to a man wearing a Barcelona jersey for a while; his favorite player was Messi. Classic.

Susan’s place is incredible. Four white, red-roofed casitas line one side of the tidy grass yard, while a large hammock deck lines the opposing fence. Surrounded by lush pastures, sloping green hills and the Pacific Ocean, ‘Garden Grove’ is beautiful. It is so homey and relaxed.

That night we sat out on the porch and watched heat-lightning storms out off the coast. Every couple of seconds the dark, enormous sky would be illuminated by a quick flash, as jagged, horizontal bolts danced between the clouds.

Prior to dropping me off at Sea-Tac exactly one week ago, Max and Tori told me that I “wasn’t allowed to be alone on my birthday” (tomorrow, September 25th). Well, it just so happens that Kay’s birthday is the 26th so we are having a joint birthday party, piñata and all.

I cannot thank all of the awesome people I’ve met so far for helping me to ease into this experience. I am definitely outside my comfort zone, but I am at peace and I am enjoying the challenge. Being that I have time, I think I am going to go to Isla de Ometepe next, a huge island on Lake Nicaragua, which boasts two volcanoes.

Nicaragua is a beautifully real place.