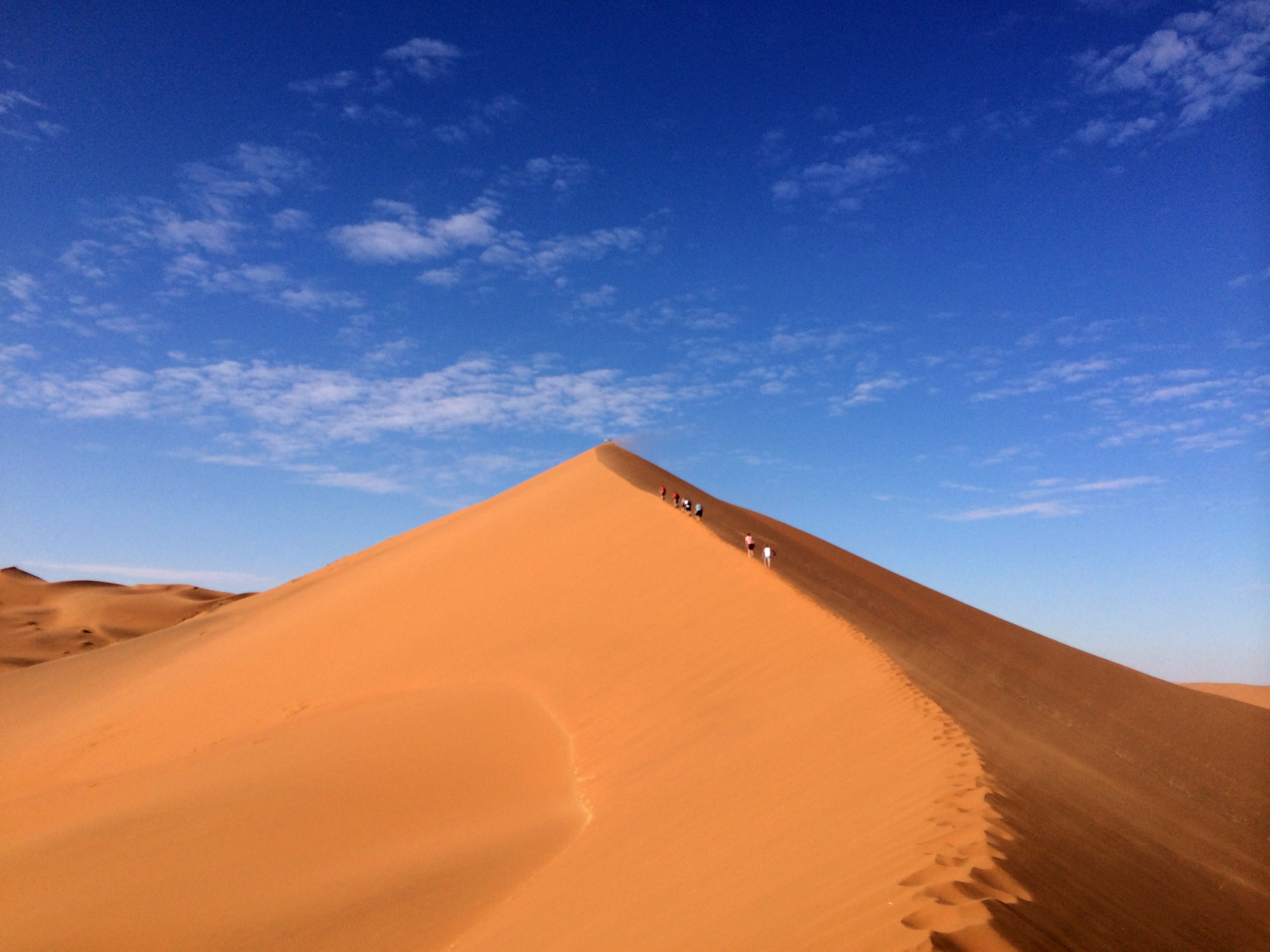 Fifty years ago, District 6 was a lively, vibrant community, with a pleasant view of the harbor and access to the city center. During apartheid, its 60,000 inhabitants were forcibly removed from the neighborhood and the government bulldozed every building to the ground. Today, it is a blank space. A large, vacant lot of dirt. A blemish, a hole in the city.

A local guy took me to the community center in Langa (the oldest township outside of Cape Town), which provides sports, arts and activities for the youth. We passed by local businesses: car washes, electronic repair shops, food vendors, etc. I was invited into someone’s home—I was hesitant because I felt that doing so was stepping over some invisible line of courtesy/privacy, but after reassurance from a man who lived there I stepped inside a small, bright turquoise room that appeared to act as a kitchen and the living room. I was shown into a bedroom, where three families live. Three families in one bedroom. Each family has one bed, which is used for storage and sleeping (the men sleep on the floor and give the beds to the women and children).

It was heartbreaking. I couldn’t believe it. Why? Why me? Why them?

Questions of privilege flooded my mind as we walked down the street to a compound of nicer, government-built, single-family dwellings, which hopefully each of the families living in the previous house will one day have. Hopefully.

As much as I have described the harsh realities of South Africa, there are plenty of amazing things happening here as well. Amid those tiny houses in the township were kids laughing and playing, as kids do. I guess I usually need to hash out and digest the harder things via writing, thus I find myself wrestling with such issues here in this space. I have met so many amazing, kind, and generous South Africans. Caring people, who go out of their way to help others. Up until this point, whenever someone asked me about my “favorite country so far,” I didn’t have an answer, but I do now.

I don’t know what it is, but amidst all of the backwards thinking (which we have plenty of back home in the U.S. as well), all of the sadness, all of the heartbreak, emerges hope, happiness, and pride. I absolutely loved South Africa and cannot wait to return. But until then, I wish the Rainbow Nation and all of its people peace and courage.

Thank you for having me.

As we exited Windhoek in a cramped Land Cruiser, the smooth paved roads and clusters of concrete buildings disappeared, replaced by a long, bumpy gravel/mud road. I went back and forth between chatting with Michael (our guide) and falling asleep.

As time moved from one hour to the next the scenery began to change. One moment we passed through a lush mountain pass and the next we were in the middle of a beige desert.

The car pulled into the tiny, dusty settlement of Solitaire, which reminded me of the town in the movie Cars (due to the desolateness of the town, but much more so that colorful abandoned cars decorated the road). Solitaire boasts “Namibia’s best apple pie,” but no disrespect to the kind woman who made it, as it was tasty, it has nothing on my mom’s or my grandma’s apple pie. [note: I’m looking forward to Thanksgiving already]

We awoke very early the following morning for another jarring drive across the desert to Sossusvlei. Once inside the park we reached a point in the road at which Michael stopped the car and pointed to the top of a massive sand dune—“That’s Big Daddy dune,” he said to me, “And you’re going to climb it.”

The other two passengers opted for a smaller dune, so I eagerly hopped out and started off across the hard clay as the car drifted out of sight. Something about being alone in the desert, knowing that the task ahead of me wasn’t easy, filled me with adrenaline. Without hesitation I clambered up the first sandy slope, sliding what seemed like one step down for every two that I took.

By the time I had reached the first ridge, sand had filled every ounce of empty space in my shoes and the wind was whipping fiercely over the ridge. I trudged on, attempting to delicately place my feet on the sand, so as not to sink through, while at the same time pressing hard enough to propel myself up the dune.

The sand felt prickly as it smashed into my legs before plummeting over the ridge. And then, all of a sudden, I had made it. I turned around to see beautiful, sandy, quiet nature stretching out in all directions. Namibia is the closest I have felt to stepping foot on another planet.

I took off my shoes, and galloped straight down the face of Big Daddy into Deadvlei (“Death Valley”). When I reached the bottom I could see blurred black shapes, silhouetted against the light, dry, cracked clay, the orange dunes and royal blue sky. I thought back to sitting at my computer nearly a year ago, revising my itinerary after I had been awarded this crazy opportunity.

When I saw photos of these strange, magnificent, beautiful, dead trees I knew that I was going to Namibia.

I wandered amongst the dead forest for quite some time, just basking in the splendor of the scenery (and the intense Namibian sun). I was content.

While Namibia is the closest I have ever felt to stepping foot on another planet, it is also the closest I have felt to stepping foot in Germany. Swakopmund is a small town just south of the Skeleton Coast; it’s also where I met Jay, a laid back dude from Marin, CA who studied economics and then, once upon a time, found himself in Namibia and never left. Today he runs a tour company and creatively dabbles in the clothing industry as often as possible.

I hopped in Jay’s bright orange Land Cruiser and sped North up the coast to a shipwreck. The Skeleton Coast takes its name from the many ships that have run aground here—rough seas, no landmarks (as the desert runs all the way up to the beach) and poor visibility, due to consistent heavy fog, make up a recipe for disaster (not to mention that back in the day, even if you did make it ashore, civilization was still miles away).

Further up the coast we explored a small salt pond, as well as some rocks that sound like metal if you strike them. We made it all the way up to Cape Cross to see a massive colony of sea lions, before hiking up a large hill to peer out over the landscape. It looked like Mars—a bumpy collage of reds, beiges, greys and oranges.

On the way back to Swakopmund we passed through a small German vacation town that is without running water or electricity, but full of eclectic colorful beach houses (all of which have giant water tanks on top of them). No more than 20 minutes later, as we neared the city limits Jay pointed out a much larger, denser group of dwellings. These too are without water and electricity, however, they are not colorful vacation homes, but rather small shacks initially made up of reclaimed garbage from the landfill, which today make up the Democratic Resettlement Community.

Namibia is an interesting (and sometimes befuddling) place. Even just moving East out of town the landscape already looked different—flat nothingness, divided evenly between the sand and the sky comprising the Dorob National park. Just inside the park I noticed that this “nothingness” was dotted with black tubes that seemed to be randomly scattered on both sides of the road.

As it stands now there is one fully operational uranium mine inside the park, another that has almost completed construction and a third will start construction in the fall, as it was awaiting the results of an environmental impact assessment, (hence the black tubes sticking out of the ground) which it undoubtedly passed.

As for the nearly operational mine, when the project started ‘Swakopmund Uranium’ labeled itself as a local company. Today, a Chinese power corporation owns Swakopmund Uranium, meaning that once completed 1,000+ Chinese citizens operate a uranium mine in the middle of a Namibian national park, with little to no supervision. With the mine came a massive influx of the Chinese population in town, as well as the redistribution of the town’s resources. For example, the large black pipe runs next to the road all the way out to the site funnels town drinking water to the site (which is estimated by some to use as much water as the rest of Swakopmund combined).

Though all that to say, the town is essentially split on the issue, the main division coming between money and conservation.

While I don’t know everything about the entire situation, it is hard for me to support a project that sits a matter of minutes away from the “moon landscape,” an incredible myriad of deep, twisting, rocky valleys and dry riverbeds. [note: I think the entire situation could make a really interesting Vice episode]

Namibia is naturally pretty, but with such a sparse population density it is incredibly difficult (some may use the word ‘impossible’) to get around without a car. So I found a cozy hostel in town and prepared to devise a plan.