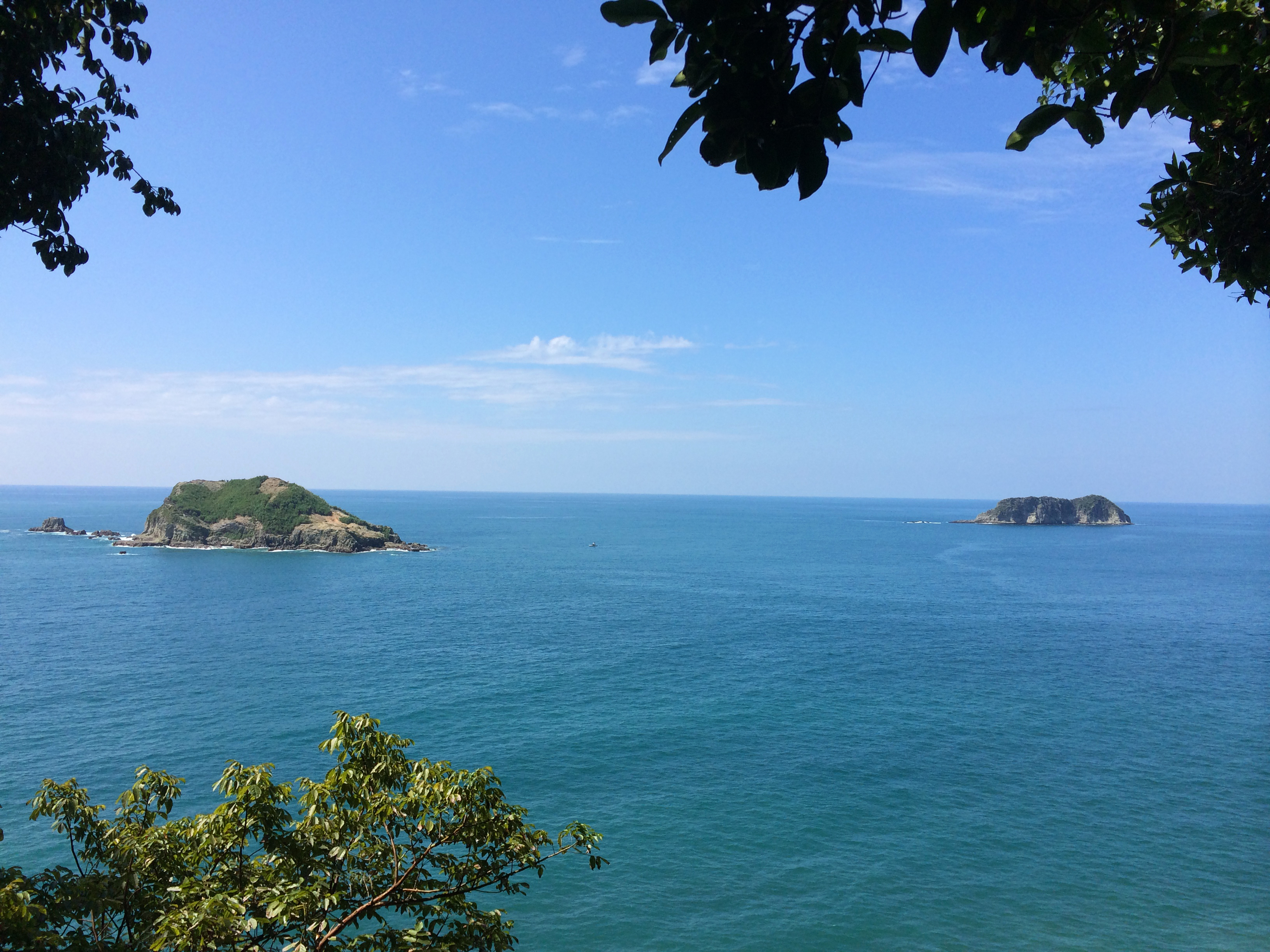 Growing up I always wanted to watch sports, or cartoons, but when Sam was in charge of the remote, we were watching animal shows. The Crocodile Hunter, Zaboombafoo—if it was on Animal Planet, PBS Kids or the Discovery Channel, we watched it.

Which, aside from the fact that I hadn’t seen my family in months, was one of the reasons I was really excited for them to experience Central America.

Michelle’s absence had left me kind of down, as though we had shared this brief moment of comfort, security, and sheer awesomeness, and then suddenly I was forced to readjust to my current reality. So when my family appeared out of the darkness of the hotel walkway, I was ecstatic.

I was able to catch up on much-needed rest, and relax in the sun. I realized that I have regained my love and fascination for reading, having been previously burnt out during college.

I finished Friday Night Lights by H.G. Bissinger (which is much more raw than the movie or the TV series—I highly recommend it) and immediately dove into Rowing Into the Son, an epic tale about a group from the University of Puget Sound that became the first Americans to row across the North Atlantic Ocean (from mainland NY to mainland England), which I finished in a matter of days.

When we weren’t resting, we were exploring.

As we strolled down the hot gravel road into Manuel Antonio National Park, I felt uneasy. There were groups with guides encouraging their groups to stare into telescopes aimed high into the treetops, looking for who knows what. I wanted so badly for my family to experience the joy, the fascination with nature, that I experienced in the Galápagos.

As we made our way onto the warm sand, our luck changed.

A dark, white-faced monkey emerged precariously from the tree line, and snuck up behind a family and their picnic. Quickly he snagged an entire package of cookies, looked daringly at the family knowing very well that there was nothing they could do to stop him, and then scampered back up a tree trunk.

A hoard of his monkey friends emerged out of nowhere and ripped open the package, inciting a feeding frenzy. One monkey went running away bear-hugging four or five cookies, pressing them tightly against his chest, hoping that he wouldn’t drop his highly coveted treasure.

We walked right up to the tree and stood within mere feet of these furry little guys. Sam was in heaven, exclaiming that he had “waited his entire life for a moment like this.”

Carara National Park started off the same way, until we came across two bright scarlet macaws, perched high up in a tree. As we moved farther into the jungle we found more monkeys, playfully leaping from limb to limb. We even saw another sloth!

I tried surfing again, though I learned that I’m still just as bad as I was three months ago. The only downside to our Costa Rican adventure was that, thus far, it is the only place where I have felt judged, and dare I say, disrespected. I would imagine that such sentiment is derived from the nearby Jaco, a tourist-haven that I wasn’t particularly fond of. There is no worse feeling than that of being excluded, of being unwelcome.

Saying goodbye for a second time in a matter of weeks was just as hard as the first.

All of a sudden, I was alone again. Sure, I knew that once I get to Chile I would meet more people and go on more adventures, but at this moment, I was left unaccompanied with my thoughts.

I talked to some friends back home, which helped a lot, but almost more importantly taught me a few things.

For one, I came into this experience anticipating my focus to be on people, sports, and the interconnectedness of the two, yet I have found my adventure to be consumed by mountains, forests and wildlife. I am finding it much easier, and rewarding, to seek out spectacular experiences in nature. I have gained an incredible amount of respect for animals and the power of the Earth’s elements. Furthermore, it has been much harder than I thought to find sports games to watch, let alone play in, but that is ok. To be honest, the coolest, most interesting conversations/experiences I have had are almost always spontaneous; they’re the little moments that are usually so easily passed by.

Most of you don’t know this, but I often write down quotes I hear in normal conversation with my friends, acquaintances, things I find in books or random articles. I have never published any of them. Such quotes can be about anything, as long as they make me feel something, as long as they provoke emotion. I think society associates the word “quote” with profound historical figures, you know, stuff that gets put on posters or reproduced over and over again on social media. Look, and more importantly listen, around you, but people say profound, interesting things everyday. Though most of the time they exist proudly, boldly in that little moment, and then in an instant, they’re gone forever.

I groggily turned off my alarm at 3:30am. I had barely slept a wink, as I had been hold with Avianca for nearly an hour the night before straightening out an interesting ticket situation (I had been issued two reservations on the same day, but at different times and each representative that I spoke to disagreed as to which time was correct).

Therefore, when I wasn’t sleeping, as the first flight of my long travel day soared toward Panama City, I was reading until I fell asleep again. Having landed, as I wandered around the maze of gates to find my next flight to Bogota, Colombia, I found myself in the same terminal I had sat in three months ago on my way to Quito.

Not much had changed; it was still stuffy, although a nicely decorated Christmas tree replaced the giant Ebola warning sign that had previously resided in the middle of the cul-de-sac of gates, lined with those long, adjoined airport seat benches.

I was overcome with anxiety (perhaps the scenery was conjuring up nerves from months passed). Or maybe it was because I felt like I was following a trail of breadcrumbs back down to South America, that I felt like I was almost starting over in terms of my grasp on the situation. Whatever it was, I didn’t like it.

I only spent about 45 minutes in Bogota airport, as I disembarked, passed through a security line, and then immediately boarded my next flight to Lima.

I spent the first half of the flight, again, trading reading for sleep, and vice versa. I awoke when the food cart was on its way by. Unlike in the US, a meal is included on just about every flight, regardless of the time of day. I nibbled on my third airplane meal of the day before breaking out some watermelon sour patch kids [thanks Michelle!].

Some international airline that I had never heard of was operating the flight in place of Avianca, yet interestingly enough, most of the flight attendants were American; I hadn’t heard English spoken so much on any mode of transportation since I left Houston back in September. Even so, I felt more out of place than normal. Perhaps this had to do with the fact that the American flight attendant asked for my drink order in Spanish and then asked the my new Peruvian friend next to me, César, for his in English.

Turbulence hit and I instinctively clutched the armrest. As the plane smoothed out into its descent, I peered out the window onto what looked like a sea of mashed potatoes. We moved beneath the thick layer of clouds, as a few buoys dotted the ocean below. Farther away some large shipping barges began to emerge from the mist, sitting silently, yet prominently, like battleships during a time of peace.

While this was the Pacific Ocean, as opposed to the Atlantic, I couldn’t help but admire the vastness, the blueness and the mystery of the water, and the sheer bravery of those four rowers from UPS.

As I sat there in the Lima airport, awaiting the final leg of today’s journey (a redeye flight to Santiago, Chile), I was excited for a fresh start, a new country and a new year.

Thank you all for your support. Happy Holidays!

[Note: Santiago, Chile is awesome! I am enjoying Chile and feel very good about where I am at with everything. Looking forward to writing the next post.]