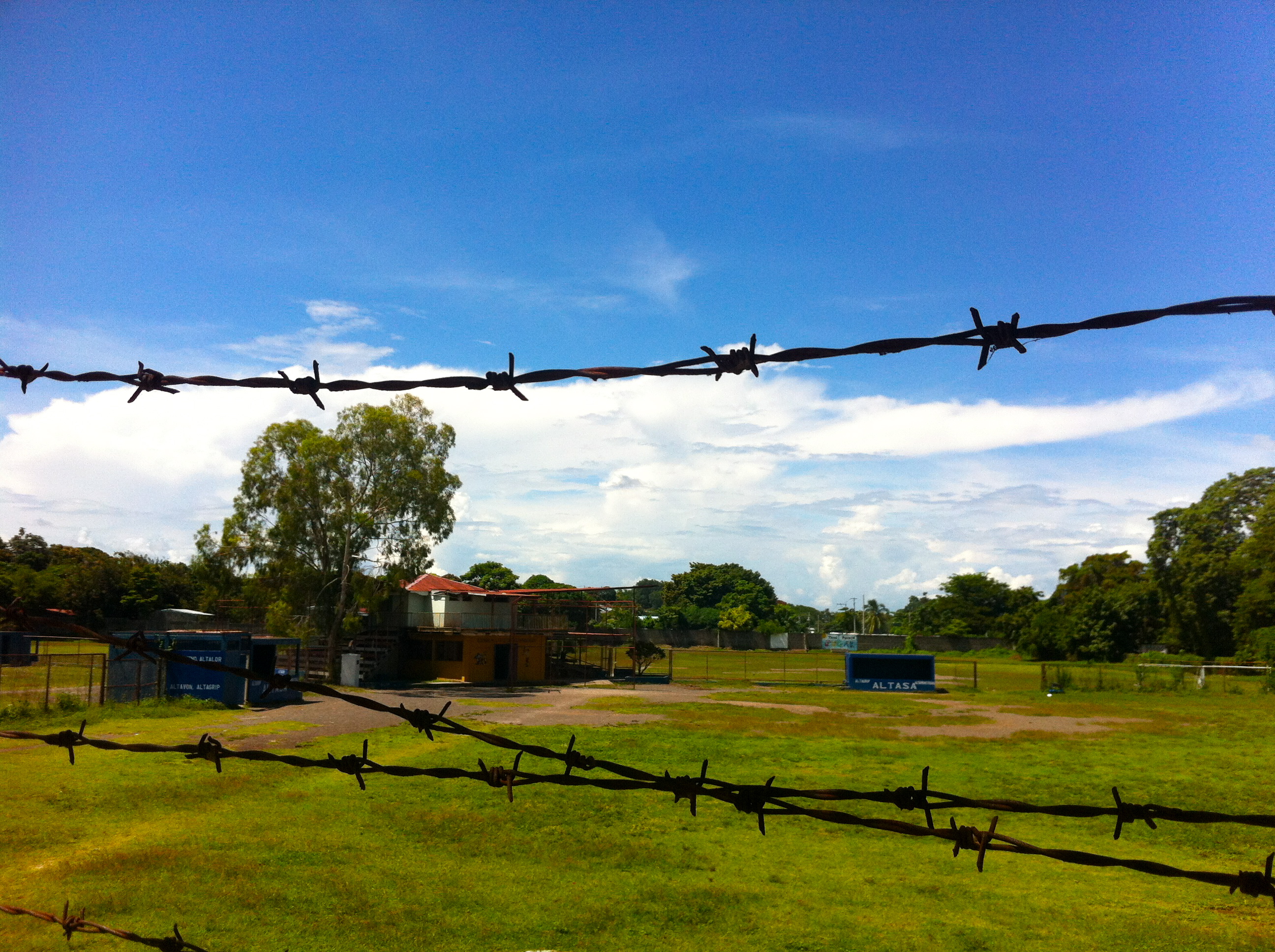 When I awoke in my warm, humid hotel room in Granada, I felt like I had woken up from a long dream. I was a bit anxious – I knew no one and I was far away from home. Finally I strode confidently out onto the cobblestone street towards the Parque Central.

I was greeted by a large grassy square, divided up by stone paths and dotted with trees. On the other side of the square sat the massive, bright yellow, red-roofed Catedral de Grenada. This place feels like an odd combination of the Dominican Republic and Leon, Spain; I love it.

The architecture is amazing. Nearly every doorway could be photographed and framed as art.

I wandered down past the touristy bars and restaurants toward the water. As I moved away from the white, colonial stone façades and cheery storefronts, I strolled past more run down shacks, and some little league baseball fields, surrounded by barbed wire fences. Nicaragua is a beautifully real place.

When I found the lakeshore though, I was kind of disappointed. The shores were muddy, and covered with trash. That being said, the lake is absolutely massive – though I could see some islands, most of the lake stretched on into the horizon line, making it look almost like an ocean.

I headed back up the street and into the square to take a few more photos when I noticed a few Americans taking some pictures of their own. I offered to take their photo – next thing I know I was having lunch with my new friends!

Tim is a goofy, energetic guy who has lived in Nicaragua for 2.5 years as a Peace Corp Volunteer and is dating Kay’s sister. He works at a school, but says that the coolest thing he has done here is start a local soccer league. [note: For all you Seahawks fans, Tim played high school football back home in Virginia. One game, his team was up 14-0 when the opposing side benched the senior quarterback and brought in a freshman named Russell Wilson. The rest, as we know, is history.]

Kay and Raleigh are both super laid-back and so nice. They live in Denver, but are traveling for a month to visit Kay’s mom (who owns a surf hotel in near San Juan) and her sister, who is also in the Peace Corp.

I could not have asked for a better group to run into on my first day – they were so welcoming, and absolutely hilarious. I left my hotel that morning anxious. I had no idea how to “start” an 8-month trip. Little did I know that because I decided the lake wasn’t overwhelmingly cool and that I needed to stop at an ATM, I would serendipitously meet these awesome people.

After lunch we strode back down to the water, just as a storm came barreling in off the water. We ducked into an empty bar and shared a few beers, along with plenty of stories. Once the rain passed we walked back into the center of town, where a truck was blasting ‘Still Dre’ by Dr. Dre, and then into a couple churches. We passed through the entranceway into the first church, at which point Kay exclaimed, “Look they have a photo booth!” Raleigh and I started cracking up, so we rushed past the confessional and made a quick exit.

I had booked another night in Granada so we made plans to meet at the bus stop outside Mombacho (a huge dormant volcano) at 7am. I awoke bright and early the next morning, checked out of my hotel, my temporary comfort zone, and headed down the road in search of the bus terminal.

As I got further and further from the hotel, the surroundings became less and less touristy. I found myself on a small dirt road, in the middle of the market, supposedly where the terminal was. I tried to look like I knew what I was doing, but I’m sure I looked totally lost because a man walked up and without question pointed me just a bit further down the road into a relatively small, muddy parking lot filled with yellow school buses. I boarded one and asked a man sitting next to me to tell me when to get off. At one point the bus pulled over to buy a newspaper and then again to drop it off – I don’t know if that would fly in Seattle, but for less than US$.50 I arrived at “Parada Guanacaste” at 7:00 AM on the dot. While I waited for everyone else to show up I began talking to a Nicaraguan man wearing an Oakland A’s hat–“Atleticos” I said to incite conversation. He was selling milk but stopped to talk to me about sports in Nicaragua (baseball and boxing are supposedly the most popular), “Los Marineros de Seattle,” and Nicaraguans in the MLB.

A local tuc-tuc (small, three-wheeled taxi) driver stopped and talked me as well. At this point it was 7:30 and I was getting a little worried. I tried calling Kay but my SIM card was acting up, so here I was alone, phoneless, sitting at a bus stop on the side of the road, in the middle of Nicaragua.

I knew they had stayed at Poste Rojo, a tree house hostel nearby so I grabbed a tuc-tuc and headed in that direction, unsure of where this place actually was. Not only did we almost get stuck in the mud, but the road was also under construction so the kind taxi driver walked me the rest of the way to Poste Rojo.

Sure enough, after climbing up the steep rocks to get to the hostel I found Kay and Raleigh. A little miscommunication and a lack of Internet had messed the plans up a bit, but everything had worked out. In fact, this way I wouldn’t have to carry all my stuff up the volcano.

After a little while we set off for Mombacho, only to have the same moto taxi driver I had talked to earlier that morning, tell the girls that, “some poor American was waiting for his friends for an hour this morning”; he then realized they were the friends and I was the poor American.

The hike up Mombacho was incredibly steep and tiring, but definitely worth it. The view was amazing. Although the volcano is dormant we found a vent that still billows sulfuric gas. And we saw a sloth!

We played frisbee all the way down the mountain and then headed back to Poste Rojo to relax. The tree house is incredible. It’s built in the canopy of a forest, and has smaller, singular deck where I read for a while, as well as a cool suspension bridge out to another deck. As we hung out with the manager, Brayan (a laid-back, cool Costa Rican dude) and the other backpackers, someone asked us how long we had known each other. We had been friends for less than 24 hours, yet it felt as though we’d known each other forever. Funny how traveling can do that.

I slept in a hammock on a deck in the middle of a Nicaraguan rainforest that night, and listened to the screams of howler monkeys roar across the canopy. I know it is only day three, but so far this truly is the trip of a lifetime.