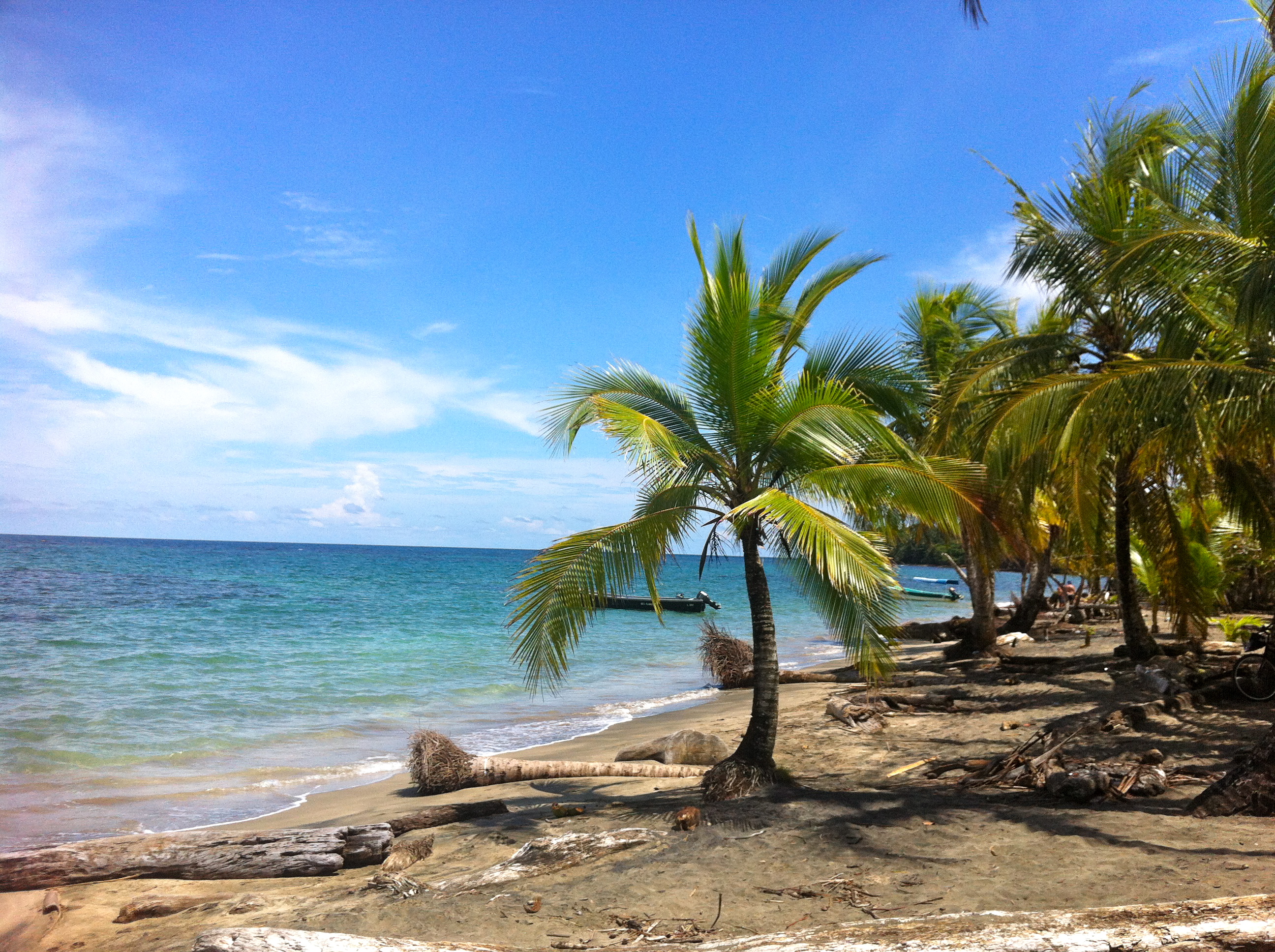 I hopped on a bike that felt slightly more stable than the one I rode on Ometepe and headed out of Puerto Viejo, a quaint, laid-back Caribbean town on the edge of Costa Rica. It only takes a few minutes to walk across the entire town, thus it didn’t take long to get out via bicycle and onto a small, coastal road.

I came around the first major bend in the road to find a clearing of trees that opened up onto a lovely beach and turquoise, Caribbean water. I stopped briefly, but kept on, as I was en route to Manzanillo (about seven miles down the road). When I pulled into town (which was even smaller than Puerto Viejo), the pothole-ridden road turned into a sandy trail, through arching palm trees.

I started talking to a nice man selling coconuts. I decided to buy one and asked him to watch my bike, which I had locked to a palm tree. He picked up one of the coconuts and began hacking at it with a machete. Once he got it open he threw a straw in the top and pointed me in the right direction. After a short hike through the jungle, I was sipping coconut water, straight from the source, on a sandy beach.

I laid peacefully in the shade for a while, listening to the sound of the waves lap against the shore. I hopped back on my gear-less, beach cruiser and peddled back down the bumpy road towards town.

For some reason I was craving BBQ so I stopped by an Australian spot, where I met some cool people and enjoyed delicious food. The following morning I headed back to San Jose to plan out the next chapter of my adventure. I met a really cool Canadian on the bus; she is living in Puerto Viejo and volunteering at the animal rescue center. We had an awesome conversation about all kinds of things, but by far the coolest part occurred when we got off the bus. Before we went our separate ways, she told me to hold out my hand, as she placed what looked kind of like a chestnut, in my palm. “It’s a seed,” she said, “from Puerto. It’s supposed to protect you.”

It was a beautiful gesture that I feel sums up the backpackers’ state of mind. I have learned that when you are traveling, you look out for one another. I think many people have a preconceived notion that traveling is inherently dangerous. Yes, you need to be careful, but believe me, not everyone is out to get you.

While I enjoyed Costa Rica, something (apart from my 10-day visa) was telling me that it was time to move on. I made friends with some hilarious Italians. I hiked through a cloud forest. I pushed my limits and went zip-lining hundreds of feet above the jungle. I biked to picturesque beaches and drank out of coconuts. I met some amazing people and made some new friends. Costa Rica, I’ll be back.

Quito, Ecuador is beautiful. As we began our descent towards the airport we dipped below the frothy clouds, catching glimpses of green, sloping mountains. The city itself is bigger than I imagined (about 2.6 million people), and sits at 9,350 feet above sea level. Altitude sickness is very common among tourists here, but I’m doing just fine so far.

Fortunately I awoke to a sunny day this morning, so I hopped on a local bus headed for Mitad del Mundo (“Middle of the World”).  The official currency of Ecuador is the U.S. dollar (it’s really strange to be somewhere so foreign, yet use money from back home), so about an hour and $.70 later, I arrived at my destination. Minutes later, my right foot was in the Northern Hemisphere and my left foot in the Southern (or so I thought).

This line was once thought by some French explorers to be the Equator, so they built a fabulous monument to commemorate this sacred place. As it turns out, the French were about 720 feet off, which was pretty good given the instruments they had.

GPS as since pinpointed the location just next door, where a more interactive experience has been built. Though it lacks a massive monument or a touristy village, this site was actually more interesting and educational. They showed us how water does not spiral when flowing through a drain on the equator; it just drops straight down, as well as many of the instruments indigenous peoples used to tell time, seasons, etc. long before the Europeans arrived. In fact, ‘Qui-’ means “middle” and ‘-to’ means “Earth.”

On my way back it started to pour, so when I eventually reached my cozy hostel, I decided to stay in for the evening. I may take some Spanish classes next week, and perhaps even live in a homestay. I’m really looking forward to my month here in Ecuador. I love this place already.