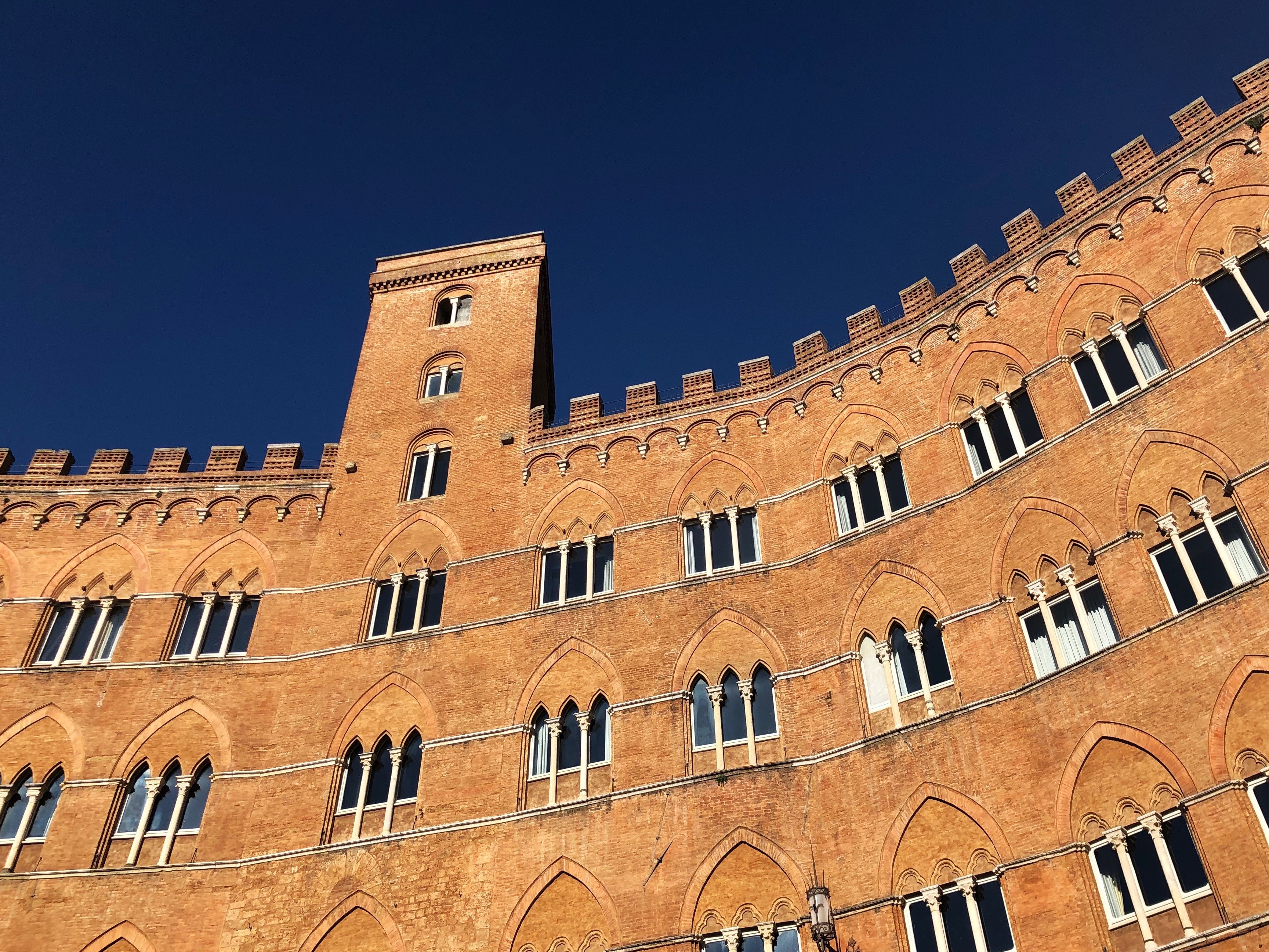 The last few days have been incredibly busy, hence my lack of writing, however I’ll do my best to catch you all up to speed. The second day/night in Siena was awesome.

We climbed the bell tower in Siena (we seem to have a habit of finding the tallest structure in each place we visit and climbing it) which consists of over 400 steps that wind tightly up a cramped brick tower. At certain points I literally had to turn sideways while crouching to fit up the stairwell. The view from the top was well worth it as we gazed out upon the rolling, golden Tuscan hills.

We spent the rest of the day shopping for friends and family, relaxing, etc. and then after dinner met up with our friends Brad and Briana in Piazza del Campo. We noticed the previous night that most people sitting in the Campo at night were enjoying some of their favorite Italian beverages, thus we decided to follow suit. The free-thinking mentality of Europeans really is something, as not only was it totally acceptable for Brad to pop a cork nearly 25 feet into the air, in a public square, but he was actually applauded by several locals sitting near us.

We had an absolute blast with our American friends, who will actually be in Rome on friday as well. We awoke early this morning to catch a train to Chiusi, sit for several hours and then take a train to Rome. At the Chiusi train station, Whitney Houston’s “I will always love you” was playing. For those of you who don’t know it: good song. In order to fully appreciate the song, I also recommend watching the video of Sean and Travis singing it.

When we finally arrived in Rome, we began seeking out the UW Rome Center (which is decently hard to find). The building is not labeled, however we eventually found it tucked into the corner of a square next to the Campo de Fiori. After signing a few documents and handing over our deposits, we were given our keys and told to meet our landlord at our apartment, which is about a 15-20 minute walk from the Rome Center, thus we “should probably start walking.”

Rome is intimidating, much more so than anywhere we have been. Perhaps because it is so massive, busy, and stifling hot all of the time. Or perhaps it is because for the first time, I am in a foreign city, living on my own. Even going to college was not a severe adjustment, being that UW is closer to my house than my pre-school, middle school and high school. The first few months of college honestly felt like going to camp.

This, however, is much different. I’m not trying to be overly dramatic or anything; I’m simply reacting to my new surroundings. It’s exciting, yet unsettling at the same time.

Grocery shopping, for example, is way harder than it looks. Especially in a foreign country, where customer service is basically nonexistent. Once Reed and I completed this momentous task, we settled into our apartment.

We have a kitchen, a tiny bathroom/laundry room (the knob to turn on the shower is not actually in the shower–not sure why; There is not enough room between the wall and the toilet for someone to sit down–once again, the architectural logic is beyond me), and a high-ceilinged sitting room [it has air conditioning!] which includes a loft, with one bedroom below and another above (though I cannot stand up in either bedroom). The decorations are interesting, ranging from a small boxing/punching bag to a Marilyn Monroe in Paris print. Despite it’s comical appearance, the apartment is so cool! It’s quirkiness almost makes it more cozy. Having a space that is yours after traveling for the last 10 days is very refreshing.

This morning we had our orientation meeting at the Rome Center. Everyone in our program seems really cool. Following a short tour around the neighborhood, we retired back to our “home” to get out of the heat before we have to head back for a class/meeting in a few hours. The next two weeks in Rome should be interesting.

I sincerely hope you all are enjoying my blog!