Santiago, Valparaiso, & The Island of Chiloe 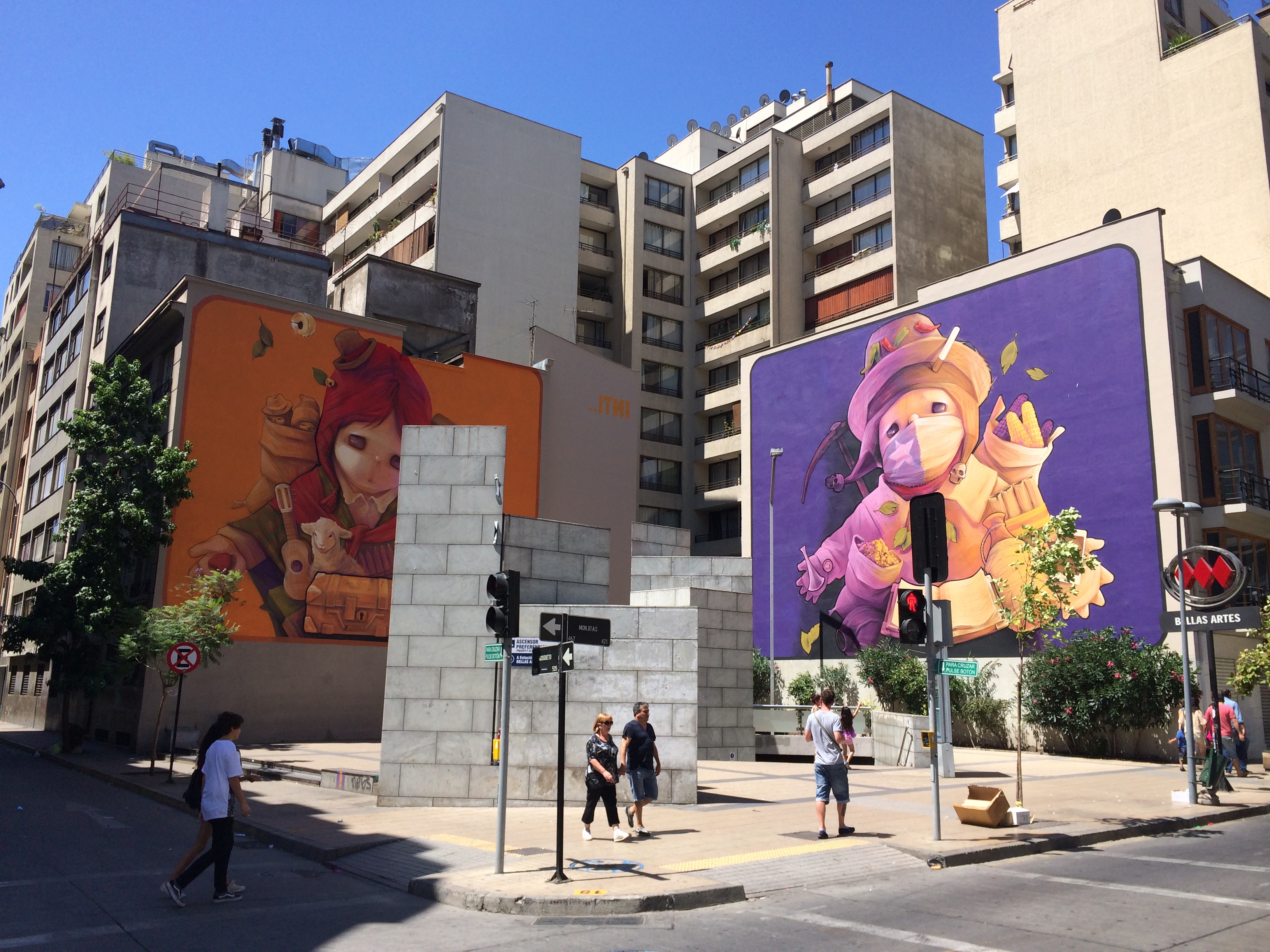 The streets were nearly empty as I wandered aimlessly around Santiago, Chile. Nearly 8 million people live in the metropolitan area of Santiago, and yet an eerie quietness tiptoed through the deserted sidewalks, passing silent intersections and motionless storefronts.

New Years Eve is a huge deal here in Chile, thus the entire city shut down early so that its citizens could go home to gear up for the big night. Back home, most spend the night with friends, watching fireworks and staying out until the bars close at 2am, but in Chile, New Years is both a family and a social event full of interesting traditions. Back home, if you saw someone sprinting around the block with an empty suitcase you’d probably think they’re either crazy, or drunk, or both, but in Chile, it simply means that the suitcase-wielding sprinter wants to travel in the new year, and is asking for good luck.

Everyone parties with their families until midnight or so, and then heads out to one of the many parties (most of which require a ticket) that don’t really get going until well after 1am. To call this an event is a severe understatement; it is an extravaganza.

I wasn’t overly keen on paying anywhere between USD$50-$100 for a party starting at 1am, so I hung out with a group of awesome people at my hostel until they left for their various parties late into the night.

The next morning it seemed as though the entire city of Santiago was hungover, as the streets were even emptier than yesterday. Although several stops on the “first walking tour of 2015” were closed, we practically had the city to ourselves. Even most of the stray dogs (affectionately known as “quiltros”, and fed, cared for, and even picked up after, by the people of Santiago) seemed to be hibernating.

On our walk we learned a lot about the military coup (propped up by the U.S.) and 17-year dictatorship that followed. While I am happy to be an American, as I learned about the suffering and oppression that suffocated the country for so long, I felt ashamed of what our government had done. Later I would visit the Museum of Memory and Human Rights, an amazing museum dedicated to the remembrance of those lost, abused, and oppressed during these hard times, as well as the avoidance of the repetition of history. It was disturbing, beautiful, and gloomy, yet bright and powerful.

New York Street (the old financial district) has since been replaced by a newer area, nicknamed ‘Sanhattan,’ but as we approached the narrow cobblestone street I was enthralled by the thin iron gates and tall sophisticated buildings.\

At the end of the street sits the Union Club, a very exclusive, traditional society that didn’t admit its first female member until 2006. Across the street lies a slightly satirical imitation, the Union Bar, which is open to just about anyone. I was told that one will find a similar atmosphere at both establishments: older men in suits, drinking and having presumably intellectual conversation. Seeing as the expensive club wasn’t an option, I opted for the pub to grab a sandwich. The place had an aura of blue-collar sophistication about it—the waiters were dressed up, suit-clad men moseyed around the bar engaging in conversation, glancing every so often at the TV in the corner which seemed to be playing the same infomercial of bikini-clad women over and over again. It was definitely an entertaining environment.

The following day I ventured to the central market to enjoy some of the freshest fish I have ever tasted, and then took the metro out to the massive cemetery. I passed through the gates, onto a paved road, and through the first intersection of what looked like a residential neighborhood. Small stone (some marble, others cement) house-like structures lined the street. About two blocks in, I peered right down the walkway of a multi-story, apartment-like building full of tombs. It was unlike any cemetery I had ever seen.

I decided to stay an extra day in Santiago to climb Cerro San Cristobal, but had to change hostels, as for the first time on my trip, I am in the middle of “high season.” On my way I stopped briefly at my favorite gelato place, where I met Doug and Alison, a Canadian couple about my parents’ age. After a quick chat, we exchanged info and I was on my way again.

While I enjoyed Santiago, I am learning that I can only handle big cities for so long, thus Valparaiso was a nice escape. Extending from the sea up into the surrounding hills, and filled with colorful street art and good food, the city reminded me of a smaller, Chilean version of San Francisco.

I got into town fairly late, so I wandered around hoping to find something that was still open. I happened upon La Copa Rota, a tiny café that only has a few menu options each day. Happy to find food, I sat down, and ended up with bread, a tasty dipping sauce, fresh salad, delicious lasagna, a desert crepe, juice and a pisco sour, all for less than 10 bucks. The place doesn’t even have a trip advisor page, yet it offers gourmet food at backpacker prices [if any of you ever make it to Valparaiso, it’s on Brasil street, next to a small set of shops covered by a tent].

The next day I strolled toward Plaza Sotomayor a little early, prior to another walking tour, and wouldn’t you know it, my Canadian friends wandered in minutes later!

Many are familiar with the California Gold Rush of 1848, as well as the construction of the Panama Canal in 1914, though I had no idea the impact it had on this small city, tucked away near the bottom of South America. When the gold rush hit, much of the western world flocked to California, but the only way to get a ship to the west at that point in time was sailing all the way around South America, allowing Valparaiso to serve as a sort of halfway point. The prosperity of the town exploded. The main square was flooded with nice shops, fancy hotels and the like, as it quickly became one of the wealthiest port towns in the world. Enter the Panama Canal, and suddenly the town held virtually no world importance. The city entered a steep economic decline, contributing to poverty, crime, and a general breakdown of the once prominent “jewel of the Pacific.”

Thankfully, following the end of Pinochet’s regime in Chile, tourism began to gain a foothold and has allowed Valparaiso to rebuild and reestablish its beautiful culture.

The next morning I strolled around the outer edges of the main part of town to take in the incredible works of street art. Being that Valparaiso is built on several giant hills, there are a series of timeworn elevator type lifts strategically around town, some of which are over 100 years old.

As we made our way back down towards the water, I heard a familiar voice call out from behind me, “Look who it is!” exclaimed Doug. Apparently, moments earlier he had told Alison that he felt a “Wil sighting” coming on. Again I can’t help but to think about the intricacies of life; small, seemingly insignificant decisions often have much bigger implications. You might think you’re recommending an ice cream flavor to someone, but in reality you wind up making new friends.

On my last morning in Valparaiso, I went to buy a new SIM card. The young guy cheerfully greeted me as I approached, he was excited when he learned that I am from Seattle and am also a huge Seahawks fan. He was flat out ecstatic when he learned that my name is Wilson (fortunately like Russell, our QB, and not the volleyball from castaway). I thanked him for his help, and strolled towards La Copa Rota and its upbeat playlist of 80’s music.

I couldn’t have asked for a more picture perfect ending to my brief, yet lovely stay in this charming city.

After a bus from Valparaiso, and then a night bus to Puerto Montt, my third bus to Ancud pulled onto a ferry en route to Chiloe Island. I hopped off the bus, as the boat started moving, to get some fresh air above deck.

I hadn’t been on a ferry in years. It reminded me of those trips to Anderson Island to visit my grandparents. The sun shone brightly and I couldn’t help but to draw a comparison to Puget Sound. We reached the other side and after another short ride pulled into the sleepy town of Ancud. I walked across the street to my hostel, a beautiful old wooden house and perhaps the only hostel next to a bus depot that I’ve ever wanted to stay at.

I wandered around town, ate a gigantic burger, and then headed down toward the water. A neat concrete pathway hugged the coastline, occasionally interrupted by a set of colorful, playground-style exercise equipment (like the stuff I saw in China). I think it would be wonderful if the US built something similar in city parks (I’m actually really surprised they haven’t, as it seems like an easy way to encourage exercise).

I paced back up the block to look for some food only to find everything was closed and it was only just after 9pm. I scrounged up an empanada from a local deli and headed back to the hostel with my meal. When I sat down at the table with one meat empanada and an orange, a nice older Italian man, named Angostino, eyed me and gestured toward the steam mussels on his plate. “Would you like some?” he asked kindly.

“Oh I don’t know. I don’t want to steal your dinner. I’m fine, really,” I replied, tempted by his gastronomic creation that looked like it belonged on the Food Network.

With a coy smile, he tipped the large metal pot that sat in the center of the table forward—it was nearly half full with deliciously steamed mussels. He said that the whole bucket had cost him two euro and that he was full.

I eagerly accepted his offer, pushed my empanada aside and loaded up my plate. They were even better than they looked. A Belgian guy came into the kitchen and joined in the spontaneous feast. The next thing I knew, Angostino had poured everyone a glass of nice white wine and we were talking about our travels, while dining on amazing shellfish.

I didn’t know how to repay this act of generosity. It was so unprompted, so genuine, so real. I offered to do the dishes and despite some resistance, Angostino finally accepted my offer.

Delighted and full I went to bed, as we were to see a penguin colony the following morning, before I headed further south into Patagonia.

[note: I apologize for taking so long to post. I went trekking through Torres del Paine in Patagonia, thus I fell behind. Hopefully I’ll catch all the way up in the next few days. Thanks for reading!]