Temple of Heaven & The Forbidden City 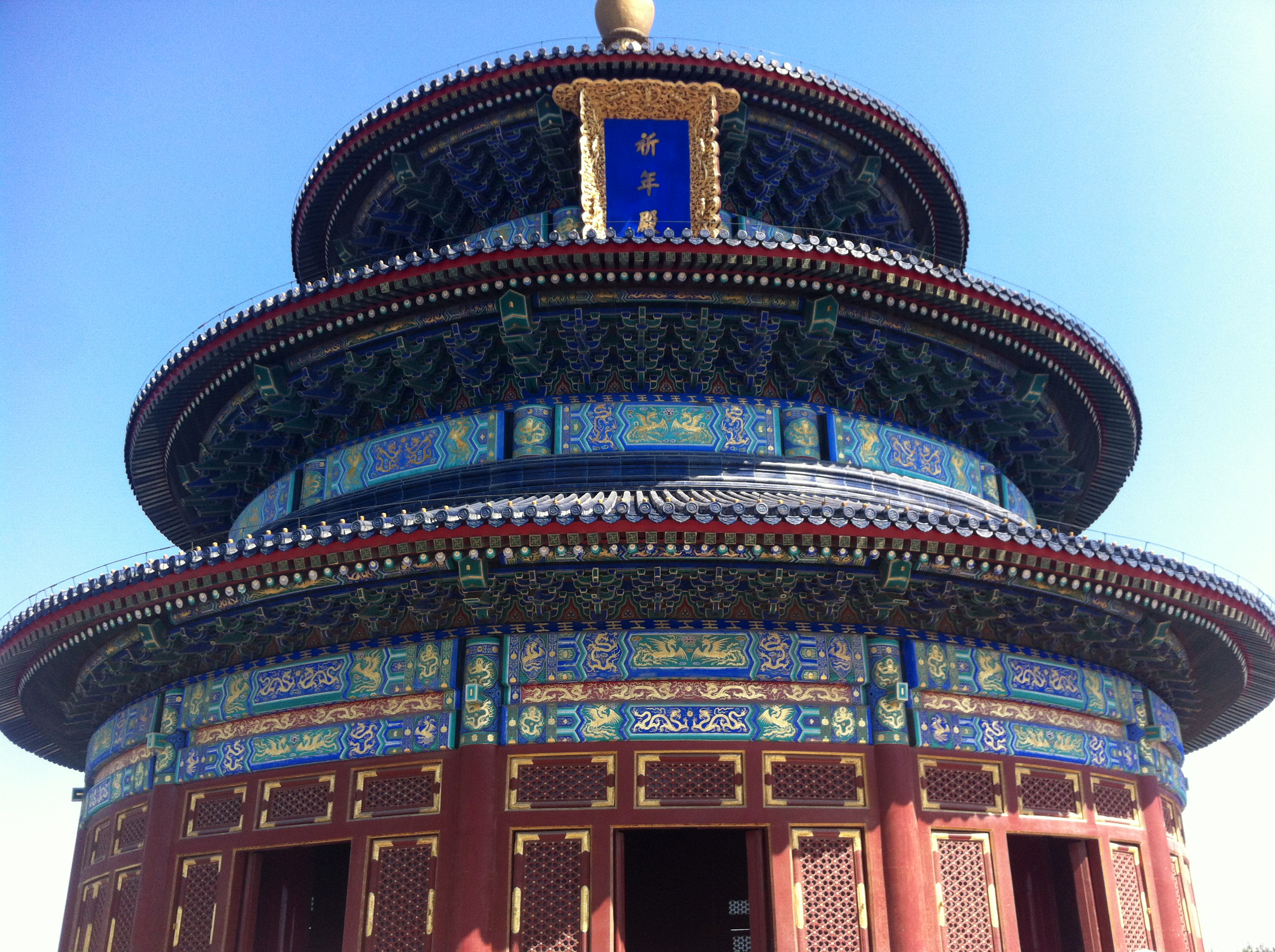 The next morning, after a scrumptious breakfast, we headed out for a local park, though as Shaosong would explain, this was not an ordinary park. In fact, due to China’s rising health care costs and inability to fulfill all needs, the government built hundreds, if not thousands, of these little parks full of exercise equipment.

We wandered through the gate and into a dusty square, dotted with sparse trees and entirely filled with adults, most over the age of 50, working out on equipment that looked like it belonged next to a colorful jungle gym. Essentially it was a playground for older people.

As we walked around, we saw old men doing pull-ups, women walking on tightrope-like metal bars and a man swinging his legs back and forth on what looked like a playground-version of an elliptical machine. We tested some of the equipment out and then meandered over to another square in which people were dancing together. While it was rather different to see 20 senior citizens blasting music and dancing freely through a park, this was not even the most discerning part of the scene.

Everyone had either set their bags and coats on the ground or hung them on a coat rack on the edge of the brick surface or from a low-hanging tree. There was a sense of trust among the crowd; they were evidently not worried about any sort of theft, a feeling that is unfortunately foreign in most of America.

Shortly thereafter, we set off, only to stop several times along the way to play a Chinese version of hacky sack, as well as some sort of combination of lacrosse and badminton.

We proceeded to the Temple of Heaven, a large, multi-tiered, cylindrical temple, topped with a cobalt roof and covered in colorful tiles. The temple was perched atop huge light stone steps, and was crawling with tourists.

At this point it was ridiculously hot, so we decided to duck into a restaurant and grab a bite to eat. We feasted on some delicious noodles, various duck dishes and a refreshing root-based tea. After lunch we walked down the adjacent cobblestone alley only to run into a rather familiar looking establishment.

I would recognize the green and white circular logo anywhere; Howard Schultz had managed to extend his reach all the way over to the other side of the world.

While standing in Starbucks, several of the people sitting at the tables began to take pictures of us, which as we would soon come to find, would happen a lot. In fact, everywhere we went, we were stared at. People would point and talk about us.

Though uncomfortable at first, we got used to it, and while it was rather odd, it would be nothing to what we were about to encounter.

Tian’anmen Square is an absolutely massive space, surrounded by several government buildings, the Forbidden City and Mao’s mausoleum. The place is also swarming with police, looking to immediately suppress any sort of political activity or protest. As I walked along the square, I noticed a series of elegant light fixtures, similar to something I saw in London, or even U Village. Upon closer inspection, however, I counted upwards of 12 security cameras attached to one of the lampposts, along with floodlights and speakers hidden behind a glass box at the top.

I now understood why our professor told us not to do anything stupid while in the square.

I felt like I was on an episode of HBO’s Vice. [note: HBO’s Vice is essentially is a series of short, very candid documentaries, covering controversial topics. I highly recommend it.]

We made our way through the square and into the Forbidden City. The architecture was similar to that of the Temple, but more rectangular. We walked through palace after palace, each bigger than the last, taking in tidbits of information about what we were witnessing.

One recurring theme seemed to be the superiority of men. Feminine statues were always situated to the left of masculine ones, as the right was considered “better” or “more favorable.” We also learned that when the Emperor lived here, he had upwards of 20 wives.

At this point I was a little shocked, but as before, there was plenty more to come. Our guide casually mentioned that the punishment for adultery was to be considered on par with that of murder. She then proceeded to explain that, in fact, adultery did not apply to men, hence why the Emperor had so many wives.

I am all for respecting cultural differences and attempting to understand one another, but aspects of the culture were beginning to seem more and more backwards (according to Western standards). I’m sure we do plenty of things that China completely disagrees with, yet it is still difficult to comprehend.

I sense that a lot of people are silently struggling with little things among this radically different culture; whether it be government censorship, inequalities of some sort or the many birds we have seen cooped up in tiny cages. It has been incredibly fascinating thus far to learn as a group and grow in our understanding of this unique place.

Upon exiting the city we decided to climb the only hill in all of Beijing, in order to get a better sense of just how big the city really is. As we wandered over the large hill, it seemed oddly out of place. We would come to learn that when they dug the moat around the Forbidden City, all of the dirt was piled in this very spot, creating a large, man made hill.

Though the nice weather had eluded us, from the top of the giant mound, we could see the city stretch out in all directions, as far as the smog would allow it before it swallowed the high-rises up in its dirty haze.

We then met Shaosong’s sister, who lives in Beijing, for a tasty dinner. After our long meal, and an even longer day, we had one last stop to make: a ‘bizarre food’ stand.

We walked down the street to a line of food carts, surrounded mostly by what looked like tourists. Shaosong and Kathleen brought us to one particular cart which boasted an array of giant centipedes, tarantulas, worms, and snakes, all skewered on sticks.

They ordered a few to be cooked in oil and then passed them out to the group. I tried both the centipede and tarantula. Centipede is salty and crispy, almost like a fried sunflower seed and while tarantula tasted similar, it was also slightly hairy.

While it was not the grossest thing I’ve ever eaten, the lingering taste of fried tarantula fur in my mouth was certainly up there.