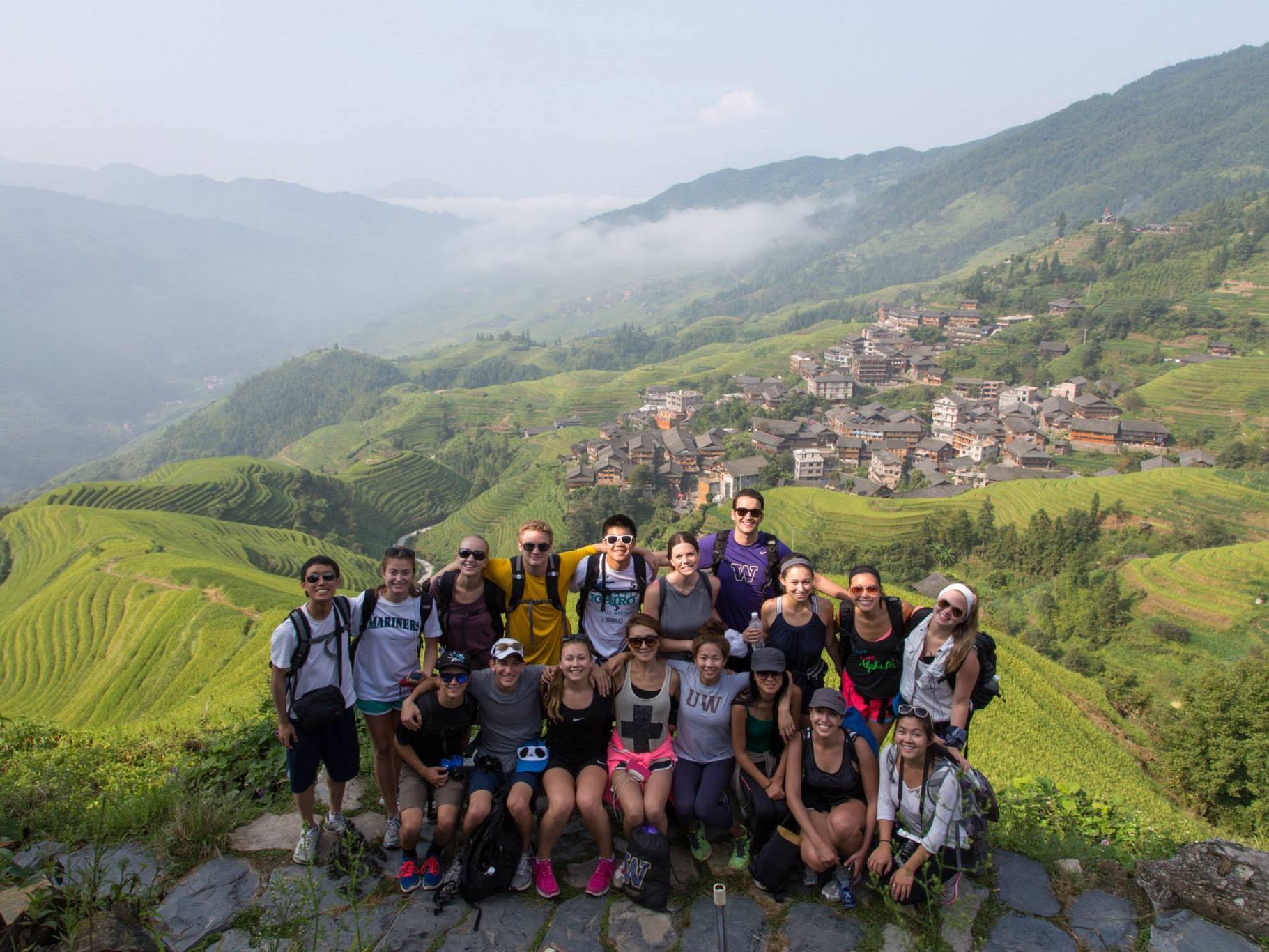 Guilin is considered a “small” city by Chinese standards, with a population of over 4 million or about the same population of the entire Greater Seattle Area. Our first full day there we took a bus over to the most famous cave system in the area, the Reed Flute Caves.

We stepped inside the entrance to the first cave and the temperature dropped considerably. We walked along a lighted path through a large, cool, damp tunnel and into a much more expansive space. Unlike the caves in Spain, these were obviously much more touristy, as nearly each rock formation was an “exhibit”, and named after either an adjective or idea (strength, happiness, etc.), or what it vaguely resembled (for example, one rock formation consisted of several round boulders neatly stacked on top of each other, thus it was titled “Snowman”).

Each exhibit had multi-colored lights that could be turned on and off, but most of the time I thought the rocks were prettier without the artificial coloring. We let a large group bustle past us, as the leader was shouting into a megaphone, describing each part of the cave.

My favorite part of the cave was definitely a large open, dome-like area, which featured a large natural pool, in front a collection of stalactites and stalagmites.

We exited the cave and hopped back on the bus, for what our itinerary identified as a “city tour.” Shaosong and Kathleen had dodged questions about the city tour all day, always giving vague replies, but I thought nothing of it.

All of a sudden, Shaosong grabbed the mic and began interrogating the bus. “Have you ever seen the show, The Amazing Race?” he questioned. Before anyone could reply, he stated coyly, “well we’re not going on a city tour, we’re having our own Amazing Race…Guilin-style.”

Shaosong and Kathleen had everyone pair up and grab a large manila envelope, which contained a big map of Guilin, a pencil, 100RMB (Chinese currency), five smaller envelopes, five accompanying clues, and a postcard. We were told that we were to be dropped off in the middle of the city, and would have to determine where to go based on the five clues. Once we arrived at a destination stated by the clue, we could open the smaller corresponding envelope, and complete the required task to move on. The only rules were that we couldn’t use the internet/phones, nor could we use any form of transportation, except our own two feet; that being said, we were allowed to complete the clues/tasks in any order and we were allowed to ask anyone for help.

As we jumped off the bus, Shaosong started the clock and bid us good luck.

Everyone took off toward Elephant Trunk Hill, the most obvious answer to one of the clues and the easiest landmark to find on the map. Michelle and I hesitated, staring at the map trying to find our bearings. I had no idea where we were, so we immediately turned for help. We had determined the location of the first clue, thus we asked a nice young couple walking by if they knew where it was.

They walked us several blocks in the opposite direction of everyone else and pointed down the street. We thanked them and headed towards this ancient stone archway next to a large tree. We reached our first destination and tore the envelope open. It said that we had to have our picture taken in front of the archway and then take a picture with a stranger in front of the tree, while all three of us made a “W” sign with our fingers. The first picture was easy, but the language barrier proved difficult while attempting to politely ask people not only for a picture with them, but to twist their fingers into a “W”.

Eventually we found a kind old lady who excitedly took a picture with us and unknowingly showed off her UW pride. As we stared blankly at the map again, I noticed a European-looking man walking past. I ran up to him and asked for help.

He was from Scotland and spoke perfect English. He pointed out where we were on the map, where the supposedly most difficult clue (a obelisk-like sculpture that honors a local war hero) was located, as well as the other three. We thanked him profusely, hurriedly scribbled out the seemingly quickest route between the remaining four destinations and set off down the street in search of this particular obelisk.

We found the sculpture, partially hidden behind a fence, and ripped open the second envelope. This time we were supposed to copy down all of the Chinese characters onto a piece of paper. I did my best, and then we retraced our steps back past the tree and towards the main town square. We arrived in a large square, filled with people, moped rental shops, and two glass pyramids, which appeared to be a direct imitation of those above the Louvre in Paris.

The directions then told us to use the money we had in the envelope to buy an item at McDonalds that we would not be able to find back home in the US and take a picture with it. Now sweating, thanks to running around in the heat, we ran into McDonalds to grab a quick bite to eat, along with rather a pair of interesting pork sandwiches (which we didn’t eat and later gave to a homeless man on the street). Before we left, we asked the young man sitting across from us to take a picture of us with our sandwiches.

He gave us a quizzical look, but obliged, snapping an extremely awkward picture of us with our sandwiches. We picked up our things and stormed out, onward to Fubo Hill.

We finally arrived at Fubo Hill Park, opened the envelope and found two tickets to the Park and instructions to take two pictures: one on top of the hill and one with a particular stone. We climbed a steep winding staircase to the top of the peak, which looked out over the entire city, the Xi River and nearby mountains, and asked an English couple to take our picture. The situation was hilarious, as they had no idea that we were racing against the other teams, thus they looked extremely confused when we shot back down the stairs instead of savoring the view. We thought we took the second picture with the correct stone statue but had actually missed the right one (which turned into a 10-minute penalty).

We ran into a few of the other teams as we trotted down the river bank towards our last stop: Elephant Trunk Hill, named after the rock face that looks a lot like an elephant dipping its trunk into the river. When we finally arrived the last envelope contained tickets for the park, as well as postage stamps. We took a picture in front of the famous natural landmark and then wrote Shaosong a postcard, which we were supposed to figure out how to mail it home to his address in the states.

Michelle jotted a kind message to Shaosong as I figured out how to get us back to our hotel. I hardly used any street names, rather relying on the lay of the land and major arterial roads. I think running around Europe last summer helped out my sense of direction a ton.

We bolted back towards the Guilin Bravo Hotel, through the scorching midday heat, hoping that we could have the front desk mail our postcard home, because I had no idea where, or how, to find a post office. Sure enough, we dropped the postcard off at the front desk in the hotel lobby and ran for the elevator. As soon as the doors opened we dashed down the hall and through the open door into Shaosong’s room, where Kathleen was sitting quietly. We had reached the finish line, and based on Kathleen’s reaction, we were the first to do so.

They would disclose the final results until that evening, so we meandered back to our rooms, absolutely exhausted.

That night, after dinner, we went out to sing karaoke as a group. Shaosong had rented a private room for our entire group, so we were able to relax after a long day and sing our hearts out.

Just before the night got going they announced the results–we had won! Even with our time penalty, we finished 30 minutes before the next group. [note: my brother has always wanted to apply to be on the real Amazing Race with me, so maybe this was a sign]

We spent the rest of the night reminiscing about the trip, listening to new renditions of 90’s American pop hits, and watching Shaosong dance to ‘Gangnam Style.’

A group of us woke up early the next morning to watch the Seahawks take on the San Francisco 49ers. Fortunately, the Hawks pulled out the W, and have kept on winning.

We spent the remainder of the day lounging around and resting, until we went to Shaosong’s parents house for dinner. There we looked through pictures, both from our trip and Shaosong’s childhood, watched all of Shaosong’s videos that he took throughout the trip and ate delicious homemade Chinese food.

As we left, a deafening boom of thunder roared through the surrounding gumdrop mountains, as the wind picked up and sheets of rain began to fall.

The next morning was an early one, again, as we headed to the airport to catch a flight to Beijing. As we waited to board the plane, I looked over and sitting in the boarding area was a shirtless man. I do not know why he was not fully clothed, nor if he ever put his shirt back on, but at that moment all I could do was smile and think to myself, “This is China.”

We made it to Beijing and then onto San Francisco, and eventually, 31 hours after we had left our hotel, we landed back home in Seattle.

I realize it took me roughly two months to finish this blog, but that is life, and as I reflect on these three outrageous weeks, I’m overwhelmed with gratitude and astonishment.

I walked on the Great Wall of China. I saw Chairman Mao’s body, after I had casually strolled through Tiananmen Square. I rode in a rickshaw and made dumplings from scratch. I met a Chinese metal rock star that now works at the Chinese equivalent of Google.

I ate tarantula and visited the “Harvard of China” (Peking University). I witnessed a nationalistic concert and stepped inside the ‘Bird’s Nest’, as well as the ‘Water Cube,’ where Michael Phelps won eight gold medals at the 2008 Olympics. We rode a train that traveled at speeds of over 200 mph. I looked out over all of Hong Kong from Victoria’s Peak, in awe, and then looked back at the Peak from the tallest bar in Asia.

We floated down the Lijiang River on rafts, rode a tandem bike through traffic and kayaked down another river. I ate some of the most delicious food I have ever tasted at the Eco Farm. We visited an elementary school, where I was viewed as a human jungle gym. We saw China at its smoggy worst. And we witnessed its hidden beauty, as we hiked through the breathtaking, mountainous rice terraces. We survived that one night in a hotel fit for the set of a horror movie. We met Shaosong’s parents and went on an ‘Amazing Race.’

We went to the other side of the world as 19 strangers, and came back friends. We went to China.