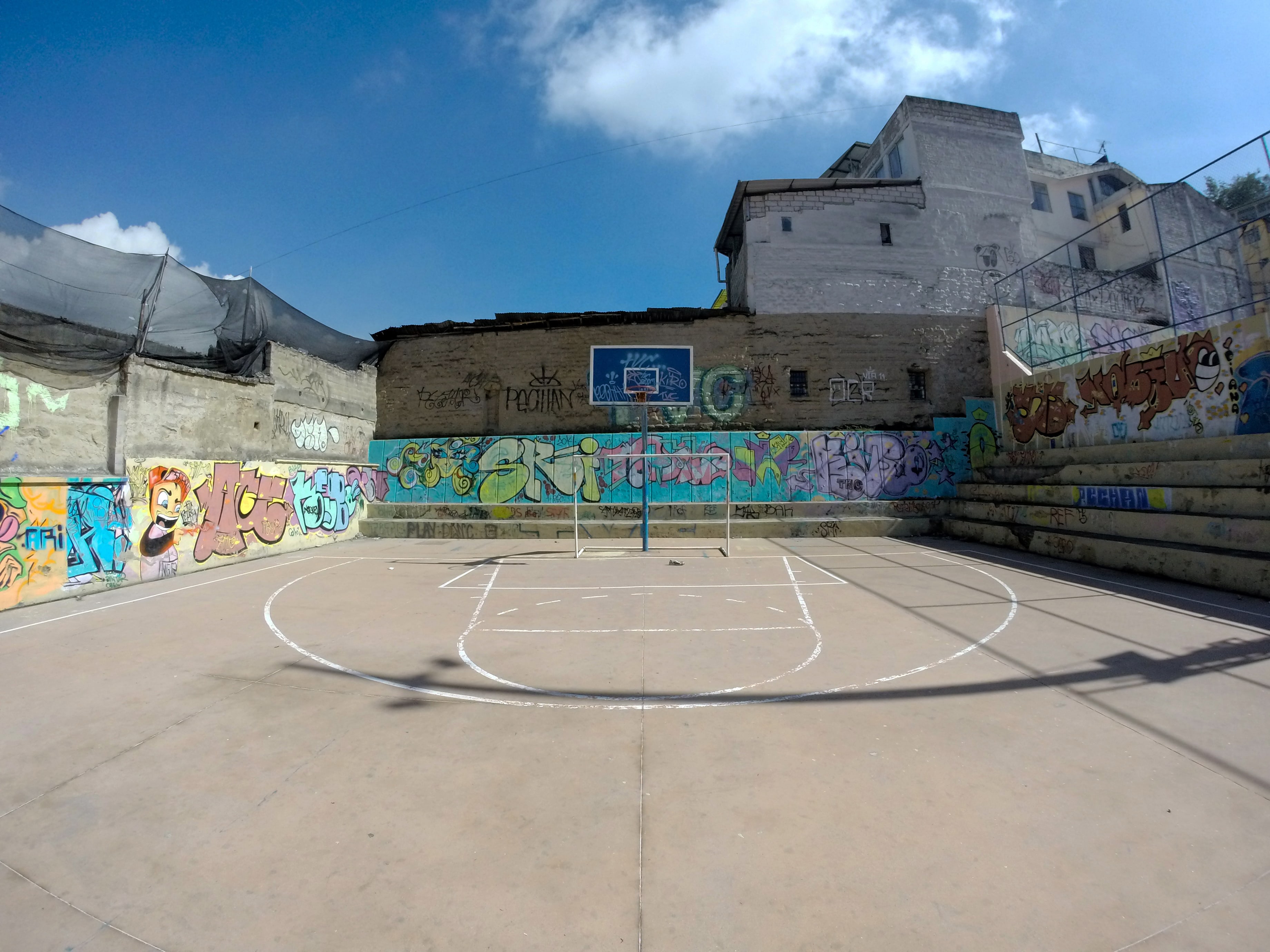 Friday marked my last day of Spanish class. I definitely improved over the past week, and it is really nice to be able to communicate down here, as it not only makes life easier, but also more interesting.

Once class was finished, I bid goodbye to the little school (and John Cena’s introduction song) and headed uptown to Mariscal, in search of a last-minute Galapagos deal. I found a few, but didn’t pull the trigger, as I had to hurry off to my salsa class.

I was anxious when I rushed up the stairs to the salsa studio, not because I was about to try to look somewhat graceful while learning new steps, twists and turns, but rather because I had just listened to 12 different sales pitches in the last hour about why I “should book right now.”

Class was really fun—I still have a lot to learn, but I am getting better. When I returned to the homestay, I had made up my mind, so I called one of the travel agencies to confirm my booking, only to find out an hour later that the system had not been updated and the spot was gone.

As it turns out, this was a blessing in disguise.

Halloween is not really a thing here in Quito, so I called it a night, hoping for good weather in the morning.

Fortunately, I awoke to a bright, clear sunny day, perfect for taking El Teleférico (gondola) up into the surrounding mountains.

As the doors hissed shut, the gondola picked up speed and whisked us away from the loud, dirty streets, up into a deep, green valley, about 4200 meters above sea level. The air was thinner, a bit colder and much fresher. As I climbed higher and higher, the view only became more and more spectacular. Though there is another summit you can reach, I turned around after about an hour and rode down the gondola with a nice, Ecuadorian family, who (right on cue) made a reference to ‘Castaway’ as soon as I introduced myself as ‘Wilson.’ I wished them well and jumped in a cab bound for Mariscal, as I was determined to find that elusive Galapagos ticket.

No such luck. Every company was shutting down for the holiday weekend and told me to come back on Tuesday. Though, I did get a haircut at “La Tijera Loca” (“Crazy Scissors”), which did a better job than the name might imply.

Sunday was one of the best days of my trip thus far.

Mladen, Luana (our new friend who works at the hostel), and I took a taxi over to Estadio Olimpico Ahaulpa to watch Universidad Católica v. Deportivo Quito. Being that both were local teams, we figured that such a “derby” would be pretty packed. Turns out that neither team is very good, thus the stands were nearly empty. That didn’t stop us from having fun though.

We got to see one goal, as well as pick up on some of the little quirks that would go unnoticed in a full stadium. For example, there were these “Gatorade guys,” dressed in bright orange, NASCAR-style jumpsuits standing on the sidelines. Aside from hoisting a giant, inflatable bottle of Gatorade up in the middle of the field at halftime, they didn’t do much other than carry bottles of Gatorade (and giant bottles of Pepsi) around. During the second half of the security guys on the field hollered up to one of the vendors in the stands and bought an ice cream bar.

Universidad de Católica won 1-0, and as the game got pretty physical by the end, I don’t think I’ve ever heard so many Catholics swear so much.

After the game, Mladen and I went on a short run. On our way back to the hostel I noticed some guys playing Ecua-volley (a local version of volleyball), so I inquired if they could teach me how to play. Shortly thereafter I was running all over the dusty, cement court, repeatedly smacking what felt like a harder, heavier soccer ball, over the net. Once the next game was about to resume I thanked my instructor and trotted down a short flight of steps to a basketball court where some kids were playing. Being that I was the oldest, biggest person on the court, I pretty much just dribbled around and let everyone else on my team shoot (Cliff Paul would have been proud).

About 30 minutes later, a new group of boys showed up, all probably within the ages of 11-16, to play some soccer (football). Once I was assigned a team, I slid back to play defense with another kid, named Wilson. What were the odds?

The “field” was straight out of the ever popular, Backyard Sports, computer game series. The basketball court was almost entirely enclosed by a big graffiti-covered wall, thus there was really no out of bounds. There were no corner kicks or throw-ins. Much of the sideline was covered in broken glass. One goal stood below one of the basketball hoops, while the other, in an attempt to elongate the field, sat at the other end of the arena, against the fence, behind the other hoop. Everything was in play: walls, telephone poles, the basketball hoop in the middle of the field...everything.

Most of the kids were really good, but a tall, skinny kid, and a small, stout boy (who was probably the youngest kid there, but had some of the best foot skills) stood out. Several dads sat on the stairs, drinking beer and coaching up the kids.

As I have mentioned before, I strongly believe that playing sports abroad is one of the most interesting, powerful, and unique aspects of travel. Though our team won, the score was entirely unimportant. Whether played on a dirty, makeshift basketball court, or on the perfectly manicured grass of Camp Nou in Barcelona, there is a reason that soccer is known as simply, “The Beautiful Game.”

The next morning I woke up at 4am, grabbed my small backpack and headed downstairs to wait for my new Ecuadorian friends. Once in the car, we tore through the quiet, dark streets of Quito, headed north. About four hours later we had reached “Siete Cascadas” (“Seven Waterfalls”) a spot rarely frequented by tourists. I strapped on some rubber boots and began our descent into the dense jungle. As we got closer to the first waterfall, the roar of the powerful water got louder. The first fall was kind of a natural slide, though as we continued to hike, the falls got taller and taller.

We spent the rest of the afternoon jumping off the waterfalls, enjoying the sunshine and exploring an old railroad track that has been slowly swallowed up by the jungle for the past 60 years or so. Needless to say, it was an awesome day, with great people.

Tuesday was my last full day in Quito, thus I decided to go see a couple things I had yet to visit. I tried to go to a museum called ‘Capilla del Hombre,’ however, apparently I got on the wrong bus because it basically went in a short circle and dropped me off where I started. I figured it was not meant to be and walked over to a famous church, whose inside is almost entirely plated in gold, as well as the National Bank Museum.

A few hours later, I found myself sitting in a mall, trying to find Wi-Fi to check if any of the Galapagos companies had emailed me back. Sure enough, the one that Lonely Planet specifically recommended had! However, their prices were at least several hundred dollars more than most other offers I had found for the exact same boats/trips.

I thumbed through my stack of business cars and fliers that I had acquired over the past few days, and found one offer that looked intriguing. I called them to find that the price had dropped even further; I had found the itinerary I wanted, on a nice boat, at a good price.

In short, I am going to the Galapagos Islands next Tuesday!!

Still hard to believe that this is real life.

[note: I am in a town called Baños right now. It is awesome. I’ll try to get some content up soon! Thanks for reading.]