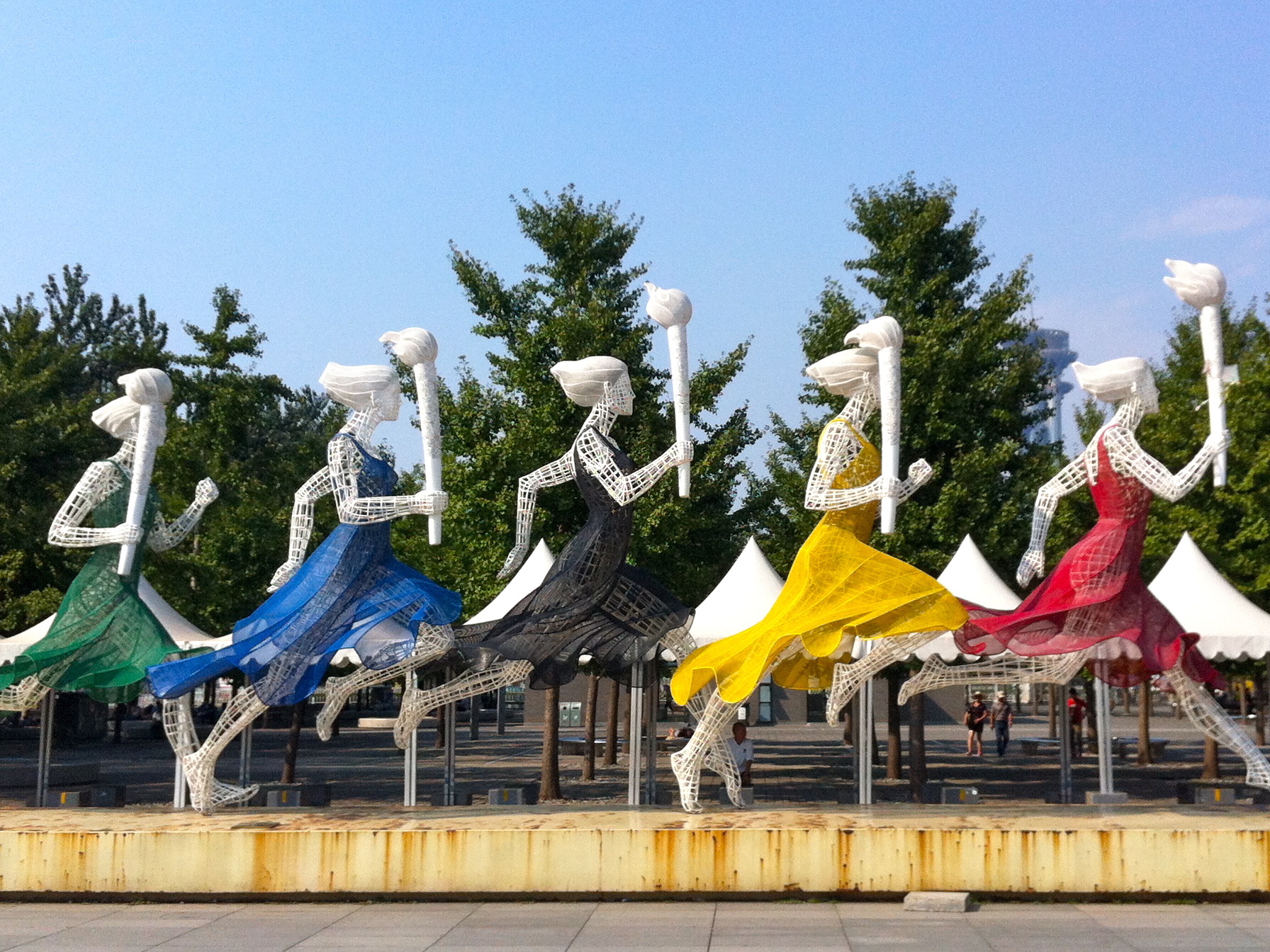 As we reached a long rectangular gravel parking lot, it was pretty clear that we were no longer anywhere near Beijing. The air was crisp and clean. Steep, forested mountains had replaced the grayish stacks of skyscrapers.

We walked through a gate, and up a long series of stairs. Suddenly, the incline lessened, and I found myself standing on the Great Wall of China. This was something I talked about as a kid or saw in movie, not something that I ever thought I would actually do.

It is difficult to comprehend how beautiful the view was without actually seeing it in person. Words simply cannot do it justice.

I was awestruck as I slowly turned in a circle peering out over lush green peaks, tattooed by a bold, sandy stone line that seemed to outline mountains as far as the eye could see. We stood there briefly, taking the moment in, chewing on the fact that this wall was built by hand over 2,000 years ago.

We began walking along the impressive structure, looking down through the surrounding valleys as we climbed higher and higher along the neighboring ridge. The group seemed to slowly divide into two, as some of us stopped to take photos and move at a more relaxed pace, while others trudged ahead. At one point the faster group decided to pause before one of the steepest inclines to allow us to catch up.

Our groups were probably a few hundred yards apart when someone in the group further ahead of us hollered out, “GOOO!” as loud as they could. Without hesitation our group screamed back, “HUSKIES!” as the echo roared through the valley. While we weren’t going to be able to see the first game in the new Husky Stadium, we did make our presence known on the Great Wall.

Fortunately we had traveled to a more secluded part of the Wall, one several hours outside of the city, thus we did not see too many other tourists – though coincidentally enough, shortly after our “Go Huskies” chant, we ran into a Boise St. fan who felt compelled to say “Go Boise” to every one of us as he passed (that really worked out well for him).

We moved ahead until we had passed through 17 fortresses/towers and reached the end of the “maintained” part of the wall. As we sat down to have lunch, a woman in the tower above us began to sing some sort of opera song. This trip just gets cooler/stranger everyday.

Just before we started to head back, a few of us ‘shotgunned’ a beer for no other reason than so we could say we did so on the Great Wall of China. We made our way back down the wall, and headed home.

The following day, while many of the people reading this were headed down to the E-1 parking lot to tailgate before the Boise St. game, we were headed to a concert at the National Center of Performing Arts. We arrived a little after kickoff back home, just in time to see that UW had taken an early lead. As the lights dimmed and the performers took the stage, many people took out their cameras. As plenty of bright smartphone screens appeared throughout the crowd, attendants were stationed throughout the aisles to shine laser pointers on the screens of people’s cameras and phones, to warn them to stop.

While it was rather amusing to watch these guys attempt to hit a tiny screen with a laser beam, the performance was even more entertaining. The group consisted both of musicians, including strings (violins, cellos, etc.), drums and horns, and a large, all-male choir, clad in some kind of military/navy uniforms. The group was very talented, however, there certainly was a ‘propaganda feel’ to the entire performance (especially when the choir changed uniforms and came back out wearing camouflage fatigues and Kevlar vests).

The performance was interesting and the facility was stunning. The ceilings were all extraordinary high, and made of gorgeous light, wood. Being that we had originally entered directly from the subway, we stopped briefly on our way out to look at the exterior of the building, which resembles a large, metallic egg.

Next on our group’s to-do list was the famous Silk Market–a large building, home to six floors of knock-off and replica goods. At first I was excited about shopping in China, and eager to bargain for fake t-shirts and such, however, I was quickly discouraged. The entire situation is incredibly stressful, because as you are trying to bargain all the vendors start with extremely inflated prices, hoping that the occasional tourist will overpay. You must silently convert the price back into US dollars, all the while the vendor is trying to get you to buy something. The shops also seem to operate under a different set of principles than in the US, mostly in hopes of making you buy something.

For example, I found a really cool “Tommy Bahama” shirt, but it was white and a size 4XL. I asked if the woman had a large, blue version of the shirt. She immediately said, “Yes” and began pulling boxes out of nowhere. The next thing I know she has laid upwards of 10 shirts on the ground in front of me, none of which are the one I wanted. I told her this and she apologized and grabbed another dozen shirts and spread them out on the floor. The shirt I wanted was nowhere to be found thus I politely said, “Thank you, but that I only wanted that one shirt” and started towards the exit. The woman chased after me and pulled on my bag, telling me that it was unfair that she had gone to all that trouble (though I had only asked for one particular shirt).

Downstairs was full of shoe stores, each of which had every color of the Air Jordan XI (arguably the rarest, and thus most ‘faked’ Nike sneaker). Once again, I was eager to check out just how realistic these shoes were, only to find that they often felt cheap and incorrectly designed. Ultimately, I did not buy anything and made my way back to the hotel to plan out our one and only free day in Beijing.

The following morning, our last full day in Beijing, we took the subway over to the Olympic Park, a gigantic square, nearly empty now, that once held hundreds of thousands of competitors, tourists, and visitors.

We climbed the steps up to the top of the Bird’s Nest, expecting to find the large stadium deserted, but to our surprise it was filled with what appeared to be the set of an upcoming play/theatrical production. There was a giant tree stump in the middle of the stadium, whose roots extended sideways towards two ponds full of fountains and water cannons. We actually sat down for a while to watch rehearsal, which was interesting, but not my cup of tea.

We moved on to the Water Cube, the place where Michael Phelps won 8 gold medals and 23 new world records were set (between men’s and women’s events) at the 2008 Summer Olympics. While the Bird’s Nest still has some pizazz, the Cube seemed a lot more glamorous on TV, five years ago. Part of the warm, muggy cube has been turned into a water park, which also has seen better days, but does feature a slide that includes a 40-ft free fall and then an incline (yes, the Chinese built a water slide that goes up) before dumping riders out into a small pool. It was pretty incredible to stand in the bleachers and look out over such a small rectangular area where some of the most amazing moments in the history of sport occurred.

When I watched the 2008 Olympics, Beijing seemed like some far away land. It seemed distant and foreign. Yet, here I was, five summers later, standing in the world-famous Water Cube.

It was a rather fitting ending to our stay in Beijing, a kind of peaceful exit from a city of over 20 million people. The next morning we would be heading to Shenzhen.