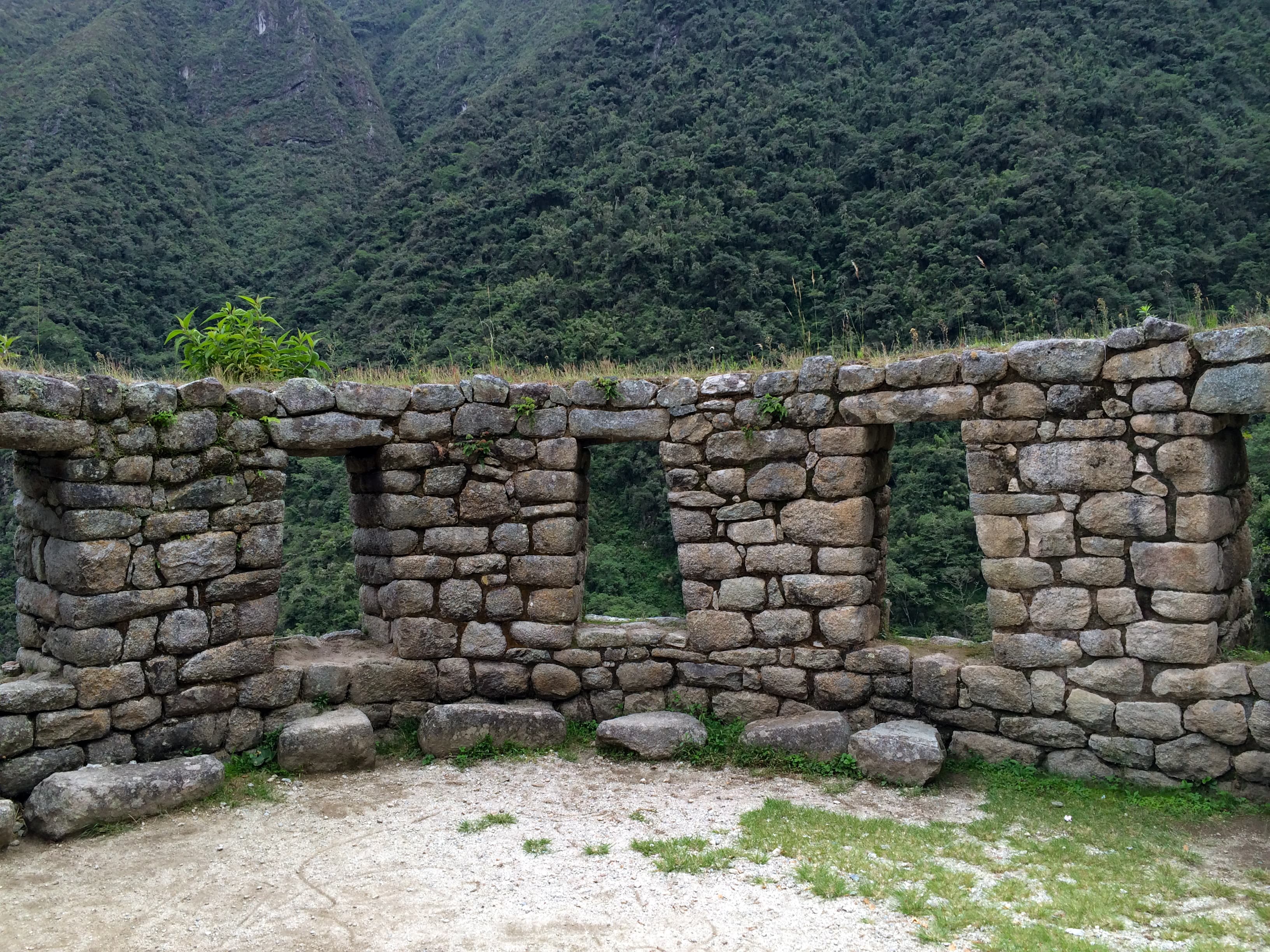 Tucked in between rounded green mountains, the city of Cusco is a lot larger than I imagined, consisting of a series of narrow, cobblestone streets, all winding toward the magnificent Plaza de Armas or zigzagging their way up the surrounding hills.

Over the past few weeks, plenty of people had told me that if I had not yet booked the Inca Trail, that I would be out of luck as there are only 200 permits issued per day. Most suggested that I “should have booked months ago.”

This was a rather interesting piece of information, as I was supposed to meet Michelle in Cusco to trek the Inca Trail for a few days. Though the majority of this trip is to be spent alone, I was very excited to share such an epic moment with my best friend before she headed home from volunteering in Argentina.

Somehow, I lucked out (again) and there were still plenty of permits available, so we wandered around Cusco for a day, before embarking on our adventure.

We awoke at 4am the next morning, stumbled outside in the dark, cool morning air and hopped in the van, along with the rest of our team and our guide, whose name is also, Wilson (thus he is my “tocayo,” meaning that we share the same name). I slumped back to sleep in my seat, waking several hours later in a small, mountain town called Ollantaytumbo.

The sharp, early morning light cut through the fog to reveal a series of stone terrace ruins, built into the side of a steep peak above town. I was anxious. I didn’t really know what to expect. I was excited, but a group I met in Puno talked about the hike as if it were the end of the world, as they limped, gingerly up a flight of stairs.

Prepared for imminent discomfort, we piled back into the van, before arriving at Kilometer 82 (the start of the trail). As we put on sunscreen and bug spray, our team of porters (aka “The Green Machine”) ran around us, unpacking and setting up with the precision of a NASCAR pit crew. Within minutes they had set up a table and hot tea, and were preparing breakfast.

While I was fascinated by their efficiency, I would later learn a lot more about this group of men and how truly impressive they are.

After a quick, yet hearty, breakfast we packed up our daypacks, grabbed our trekking poles (which I thought were reserved for grandmas power-walking through Laurelhurst, but are actually pretty useful) and set off across a wooden bridge and up the dirt trail.

No more than 30 minutes later, the Green Machine came roaring past us, each man carrying roughly 50 lbs. on his back, and would arrive at our campsite several hours before us. While it was not covered in the book, The Sports Gene, which I read in my DNA & Evolution class last spring, I wouldn’t be surprised if something in these people’s DNA helps them to literally run the Inca Trail, while carrying a ton of weight (the record time for this 26-mile trek is 3 hours 34 minutes).

We spent the first day wandering through a colorful valley, eventually turning away from the sacred river, which we would not see again until Day 3. We had an opportunity to meet the Green Machine that night; all eight men are from the same town, and are originally from farming backgrounds, having become porters to make more money and provide a better life for their families. Each man has a different job: Herman (the chef), Sicilio (the leader), Vidal (charge of the tents), and so on.

While our group was well outfitted in North Face jackets, it pained me to watch other porters march up the mountain in old t-shirts; a lot of them looked worn down. One older man took a rest and burst into a coughing fit, so Michelle offered him a cough drop. He smiled, thanked her, slung his heavy pack over his shoulder and continued trotting on down the trail.

We awoke at 5am the second day, as this was to be the longest (and hardest) part of the trek. The first half of the day with a steep ascent through ‘Dead Woman’s Pass’ (altitude: 12,300 ft.), down into a valley and then back up through another pass.

Exhausted, I focused intently on each step, staring at the rocky, rugged ground to ensure that I didn’t trip. All of a sudden, I paused, lifted my chin and peered out over a sea of green treetops that dipped far below into a beautiful valley.

I think we forget to look up a lot. We focus so much of our time and energy ensuring that we don’t step on a rock, twist our ankle, and fall down. We spend so much time planning our next step that we forget to enjoy the present and appreciate the beauty that is all around us. We duck our heads, as we try to do well in school, so that we can get good internships, which we are told will help us get good jobs. I am not saying that education is not important, in fact, it is incredibly important. I am saying that we divert our eyes from the beauty of the present because we are fearful of a potentially unpleasant future.

With the summit in site, I decided to bow my head and push through the final grueling steps, panting a sigh of relief as we reached the top. The view was breathtaking (as were the final steps, literally). Each side exhibited a collection of greens, reds, browns, greys and yellows, the clarity of which was dictated by the fog, which seemed to come and go as it pleased. I climbed on top of a giant rock and looked down the valley, where the clouds glided smoothly upward towards us, as if taking a terrestrial escalator.

After a short break and a snack, we started down the other side of the pass, which surprisingly, at times I found to be harder than going up. I had to be much more careful of where I was stepping; parts were insanely steep, and/or perhaps slippery. Just as it is important to stop and smell the roses, as they say, it is important to never get complacent. When things are easy, when life is good, enjoy the view, but tread lightly and seize opportunity. This is the time to plan that next step in say a different direction, instead of simply planting one foot after another.

We survived Day 2 and were rewarded with a shorter, history-laden Day 3. As we sat amongst some Incan ruins, Wilson began to tell us more about these people. Their engineering abilities were astounding, as they made bridges out of grasses and built earthquake proof, stone structures. Their architectural knowledge was impeccable, but personally, I found their sheer intelligence to be most impressive.

For example, they had a series of outposts from which runners conducted relays to deliver messages Cusco to outer lying cities. The runners wore a belt that had different colored ropes hanging off of it, each containing a unique, specific series of knots. The knots carried the message, but could only be interpreted by certain people; not even the messengers could read the knots, thus if the belt fell into the wrong hands, the message could not be comprised. Furthermore, when the Spanish arrived, the Incan leader used this message system to tell the others to destroy parts of the Inca Trail, leaving no traces, so that the Spanish would never be able to find Machu Picchu.

At 3:30am, we awoke to a clear, crisp starry sky before trudging down the dark path to get in line at the checkpoint (which would open 2 hours later).

5:30am finally arrived and we sped off down the trail, racing the sun as it began to rise at our backs. I was exhausted, yet unlike the first three days, I did not rest. Today was different. Today we were to see one of the Seven Wonders of the World.

We reached a series of dangerously steep rock steps, popularly known as the “tourist killer”, that led up to the legendary Sun Gate. I raced up the stairs ignoring my legs’ pleas for rest, and then all of sudden, I passed under the impressive, stone gate and looked out at Machu Picchu, the religious center of the Incan Empire.

We still had an hour or so to hike down to the “postcard photo” and the actual ruins, but I sat there briefly, letting the moment sink in. I had only dreamt of this place and yet it was real, here, right in front of my eyes. Our group meandered down the rest of the stone trail and then on into the ruins. They are amazing, the kind of amazing that makes you close your eyes, not just to blink normally, but rather close them for a moment, as if to ponder whether or not what you’re experiencing is reality, hoping that when you open your eyes everything will be just as it was.

And when I opened my eyes, there it was: Machu Picchu standing in all its glory elegantly placed below the steep peak of Huayna Picchu. It was quite humbling to walk amongst hundreds of years of history, to walk amongst the Incas.