The Tallest Bar in Asia 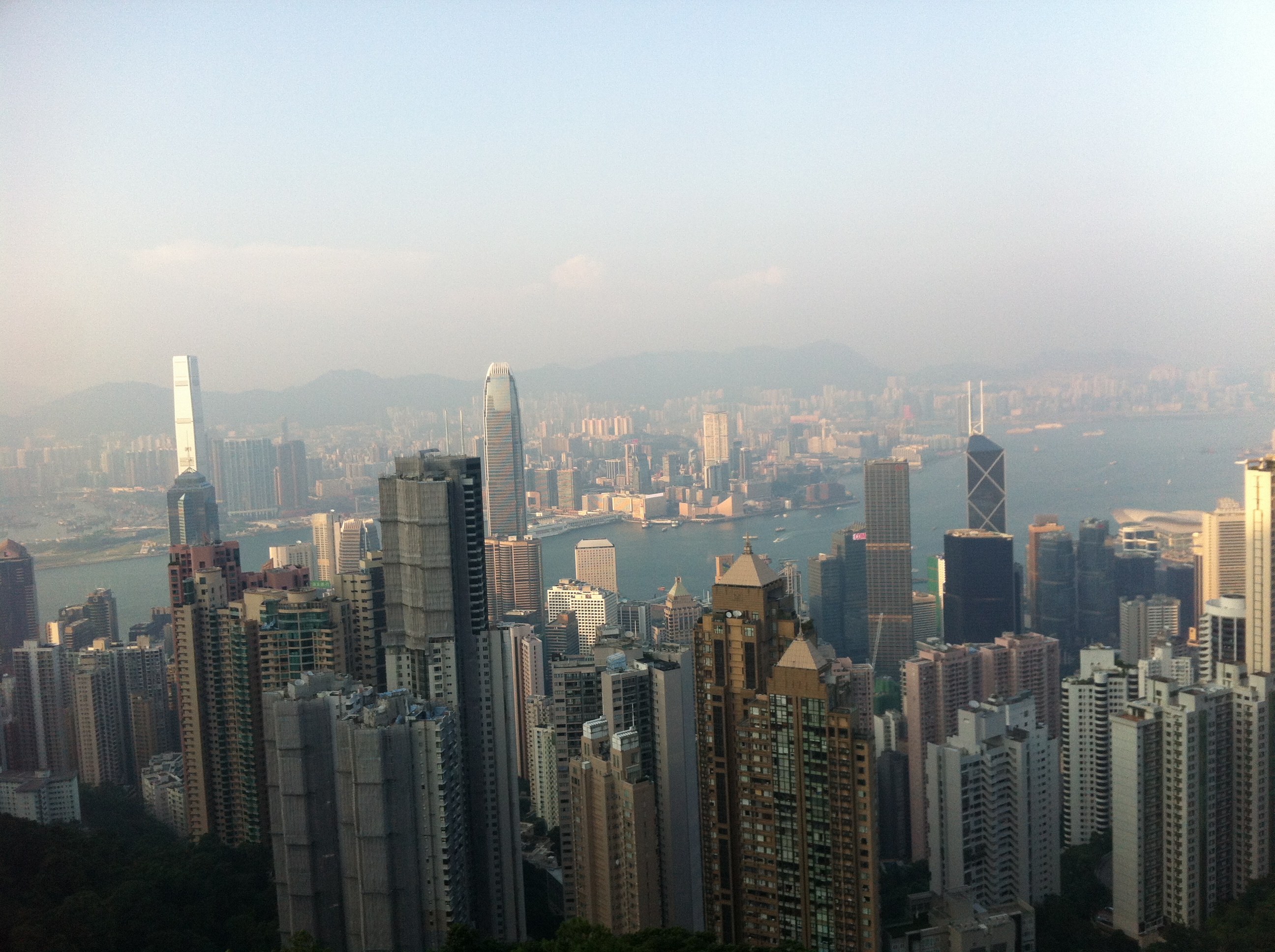 As we crossed the harbor on a ferry en route to Hong Kong Island, the sun shone prominently over the huge city. We took a double decker bus, that felt as if it was going to turn over around every sharp corner, to the Aberdeen fishing village.

I was not aware there was more than one “Aberdeen” in the world, but sure enough, here we were, wandering along the waterfront, peering out over a series of brightly colored, worn fishing boats and small ferries. It was easily one of the hottest days of our entire trip, yet we could not pass up the chance to play a little basketball. We shot some hoops and then took another ferry shuttle out to ‘Jumbo’ the floating seafood restaurant featured in the James Bond film: ‘Man with the Golden Gun.’

After lunch we waited in a long line to take a tram to the top of Victoria’s Peak, which has some of the best views of Hong Kong. We finally sat down on the tram’s wooden benches, the doors sealed shut and the large red vehicle began clicking up the track like a rollercoaster. At one point we were nearly going straight up a giant hill; it felt like the Jurassic Park ride at Universal Studios, just without the dinosaurs or exhilarating drop into a pool of water at the end.

The wait was worth it. We stood in a stone pagoda, looking out over the skyscrapers and surrounding scenery.

The next day was our last in Hong Kong. Michelle and I got breakfast with her friends Josh and Breanne, and then headed to Opening Day at the Shatin racetrack.

I had never been to a horse race before so the entire experience was new to me. Horse racing is the only legal form of gambling in Hong Kong, thus the industry is extremely popular. We sat on some uncomfortable wooden bleachers watch a race or two, learning how to fill out the betting cards. I picked two of the top three finishers in one race, but ultimately ended up losing a few bucks on the day.

While we had thought the view from the Peak was amazing, Shaosong had one last spot to show us. After dinner we proceeded to the Ritz Carlton Hotel, through a maze of marble floors and shops (that I couldn’t afford anything at), and up three elevators to the Ozone Bar on the 118th floor.

Standing on the deck I was literally looking “down” on the surrounding skyscrapers, most of which were towering in their own right. The crowd was a little different than what I was used to on The Ave or Capitol Hill. I don’t know what was a bigger giveaway that the bar was a little out of our league: the fact that half the group took some pictures and then left or that the ones who stayed could only afford one drink.

I figured that I would probably never be in the “world’s tallest bar” ever again, so rather than going with my usual order (a decently cheap beer) I decided to try something a bit more fancy.

I got a blackberry mojito, and I can honestly tell you that it was the best drink I have ever had. Michelle got a piña colada and Parker ordered a whiskey sour (which, not surprisingly, was also the best whiskey sour I’ve ever tasted). Only a handful of us stayed to enjoy the view, savor the experience, and reflect on the trip so far.

Hong Kong was probably my favorite city thus far; I want to come back someday, and could most likely handle staying there for an extended period of time. I don’t see myself ever living there, but more so than Beijing or Shenzhen.

The city is beautiful and very “happening,” which I think appeals to young people. At the same time, there is this disgusting coexistence of extreme wealth and desperate poverty. You will see a swanky 5-star hotel next to an apartment building that uses tarps as a roof and cardboard as windows. And a Ferrari driving past a dirty, three wheeled scooter cart. While people are more used to or receptive of westerners here, it feels like everybody wants something from you; everything is driven by money. Maybe I am naïve to think that not every favor, every action, comes with a price tag, but I certainly felt it more here than I ever did in cities, even in cities such as New York or Los Angeles.