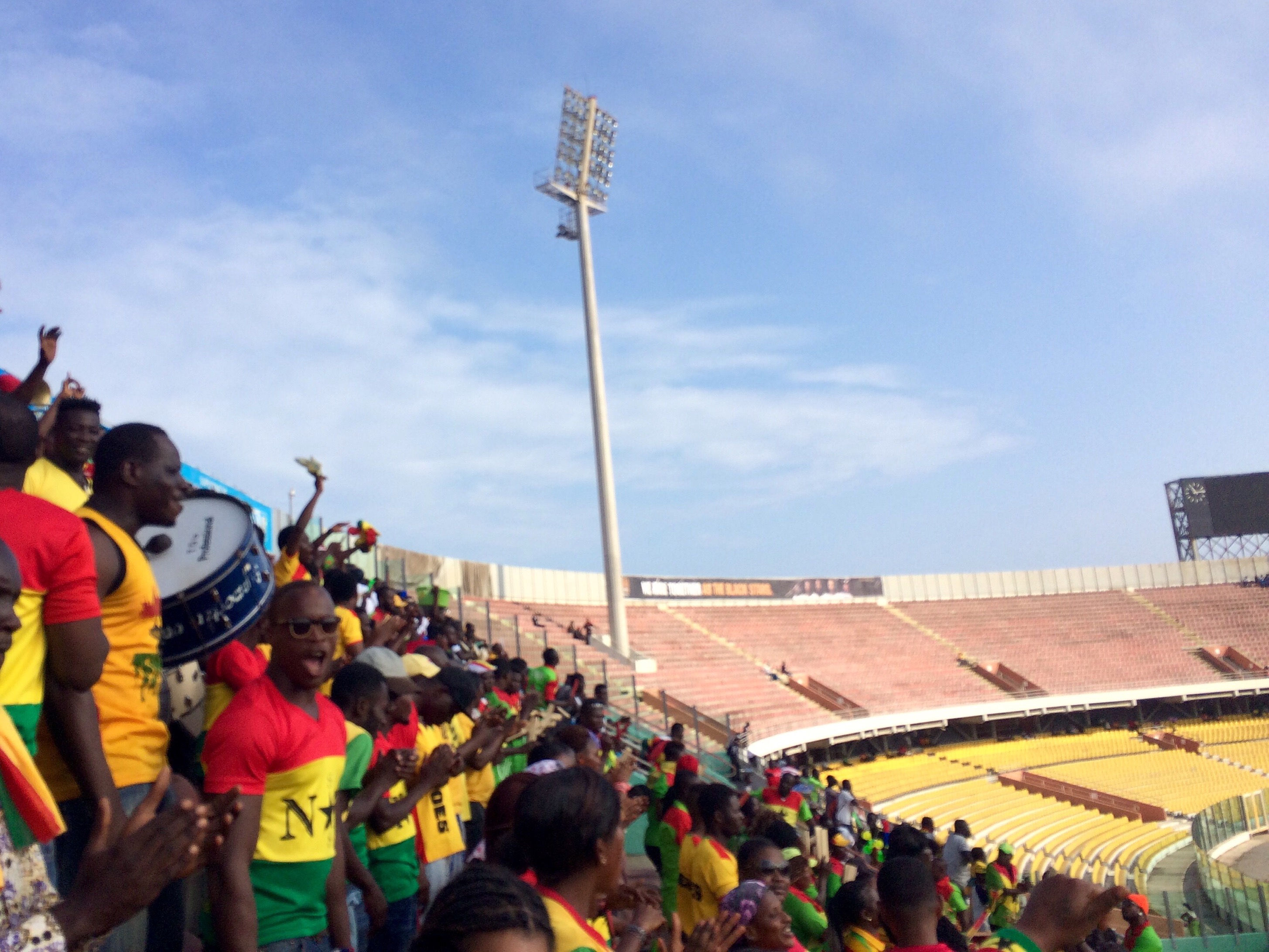 I stepped off the plane into the dark, humid air. The tarmac was still warm from baking in the hot sun all day. I made my way through immigration to baggage claim where I found some familiar faces. A few other students from the program had just arrived as well, so we gathered our bags and met Chris, one of our professors, outside. Lydia, Saki, and I piled in a cab with Justice, who has been working with Araba and Chris for four years now, as a local logistics coordinator for the program. Over the next couple days, Justice declared that I must be his “brother from another mother,” as we are the same age (born three months apart), we both studied finance in college, and we both love soccer. That first night though, I also learned that Justice is a Liverpool fan because, growing up, he idolized Michael Owen. In fact, he refused to score in a traditional manner, always (sometimes unnecessarily, he admits) cutting the ball back across the middle, then putting the ball past the keeper, just like Owen.

We awoke early for a brief orientation before boarding the bus for a quick trip to the mall. As we stepped onto the sea foam green Toyota Coaster, we were greeted by the thumping bass and peppy rhythm of Ghana ‘hiplife’ music, as well as Daniel’s big, friendly smile. Daniel too has worked with the program for a number of years—he’s one of the best drivers I’ve ever ridden with on the entire continent of Africa, plus he is hilarious and has great taste in music.

As the bus rumbled down the hill, leaving the University of Ghana campus, I noticed that I am surprisingly comfortable traveling again so soon. My fellowship prepared me well, but it doesn’t make comprehending certain societal disparities any easier. For example, right across the street from the Flagstaff House, a beautiful, massive glass building that serves as the Presidential Palace, is a rundown police barracks, full of dilapidated tin shacks and crumbling cement structures.

I picked up a SIM card and some Adidas spray deodorant at the mall (crucial when traveling with one pair of running shoes) and then headed back to campus for a short tour. Just as we passed the University library, which is the biggest library in West Africa, “Choices” by E40 came on. But instead of the Bay Area rapper asking questions and receiving one-word answers, it was Sarkodie, one of the most popular rappers in Ghana, rattling off a series of verses in Twi (one of the native languages of Ghana and arguably the second most widely used language, behind English).

Monday morning rolled around and we had our first Twi lesson. It’s always fun to learn bits and pieces of a new language, but man is it hard. We also had our first seminar under the mango tree in the courtyard to talk about how we’re going to study information communication technology and development for four short weeks and how our role as researchers (and as foreigners) appropriately and respectfully fits into society. Coming into this trip, I think I struggled most with the fact that at the end of the day, after our research, after building relationships with people here, we will be getting on a plane and flying back to Seattle. Although Ghanians have a word for people like us, “obruni” (meaning “foreigner”), I quickly learned that the word does not have negative connotations. But how do we, as obrunis, appropriately and responsibly conduct research? I am certainly still working on it.

That afternoon we went to the Kwame Nkrumah memorial, erected in honor of Ghana’s first Prime Minister and President. Before Ghana was named “Ghana” after an ancient, ancestral empire, the British had colonized the country and named it, “Gold Coast,” for it was rich in gold, as well as other minerals and natural resources. Nkrumah helped usher in a new, democratic era, though the transition was not without a few hiccups. In fact, a statue of Nkrumah was decapitated during the coup of 1966, only to have Nkrumah’s head returned in 2009 by an anonymous woman. Rather than repair the statue, the government has chosen to simply display the two pieces side by side, as if to acknowledge history, yet continue moving forward.

On our way to a small craft market, we must have tried just about every single type of food that the vendors were selling in the street. At nearly every red light, a stream of people would flock to the stopped cars and pedal their goods. There were favorite snacks (Fan Ice, which is essentially ice cream in a bag, and plantain chips), as well as not so favorite snacks (I wasn’t a big fan of this ginger, spice cake ball thing).

The University of Ghana campus is a massive collection of white concrete buildings, intertwined by long, cross-sectional streets. At this point, I’ve ran and walked all over campus, from the “night market” (a little food market that, ironically, is open all day) to the library. I did once however, get caught in a rainstorm—big, heavy cool drops came cascading down so fast and so thick that the tips of my fingers were pruning by the time I got back to our hotel.

Later that week, we visited an organization called Impact Hub Accra, which functions as a community and office space for startups in Accra. The only criteria to lease workspace in the Hub (which consists of everything from a seat at a coffee table on the first floor, for aspiring entrepreneurs, to private office space in the building next door), is that the goal of your venture must be to positively impact society. We got to meet and speak briefly with William and Emmanuel, Impact Hub’s co-founders and learn about their mission, their vision, and the state of innovation in Accra. They had just finished hosting a healthcare hackathon, but in the nature of entrepreneurship, were right back at it. As we stood in Emmanuel’s office we stared at a wall full of post-it notes, some with names of companies we recognized, others with “big picture” ideas. Currently, the pair is working on building the creative side of the endeavor, hoping to eventually create the “Innovation District” of Accra, which will someday harbor plenty of other entrepreneurs and local tech/creative companies. I thought the whole concept, the entire dream, was fascinating, and after speaking only briefing with their team, I am confident they will succeed.

In fact, while the spirit of entrepreneurship is often synonymous with Silicon Valley, it is alive and well here in Ghana. We have been very fortunate to learn from a variety of guest speakers, though one in particular captured the attention of our entire group. TechAide is nearing their launch of a product that will allow classrooms to load content onto what essentially is a hard drive and then broadcast that content to other devices via its own wifi network. This allows classrooms to distribute, view, and interact with digital content, without an Internet connection. Pretty cool stuff.

As the weekend approached, so too did our (first) departure from Accra. Friday night we went to Chez Afrique, a hip restaurant with awesome live music, and then to Republic, a popular watering hole amongst expats and locals alike. The generosity and kindness of strangers always impresses me when traveling, but especially here in Ghana. Everyone is so polite and so welcoming.

On my way back from a run through campus, I happened upon a few friends from the program who informed me that the game actually started at 3:30pm (though everything online indicated 5:30pm). We managed to track everyone down and hop in two cabs, en route for the stadium. We pulled up to a loud, joyous scene of yellow, red, green and black. Though Ghana (the “Black Stars”) had already qualified for the upcoming Africa Cup of Nations (AFCON 2017), Rwanda was still vying for a spot, thus such a game promised to be interesting, yet tickets were only 10 cedis (approximately USD$2.50) a piece.

As we walked through the dark tunnel, towards the bright light at the end, Justice shuffled his feet back and forth, as if warming up, prompting the group to skip a little bit faster. We emerged in the middle of the supporters’ section, surrounded by beating drums, loud trumpets and even louder vuvuzelas. We took a seat in one of the sections, which seemed to be as focused on dancing and singing as they did the game. Although Ghana and Rwanda tied 1-1, the experience was amazing. While I still have yet to pick a specific international team to follow, I am captivated by the cultural element that runs deep in societies around the world, as well as the fluidity, grace and tactics of the game. Which is why during my time here I am researching the extent to which information communication technologies (ICTs) impact how soccer fans in Ghana follow European and domestic soccer. But, I’ll get to that later.