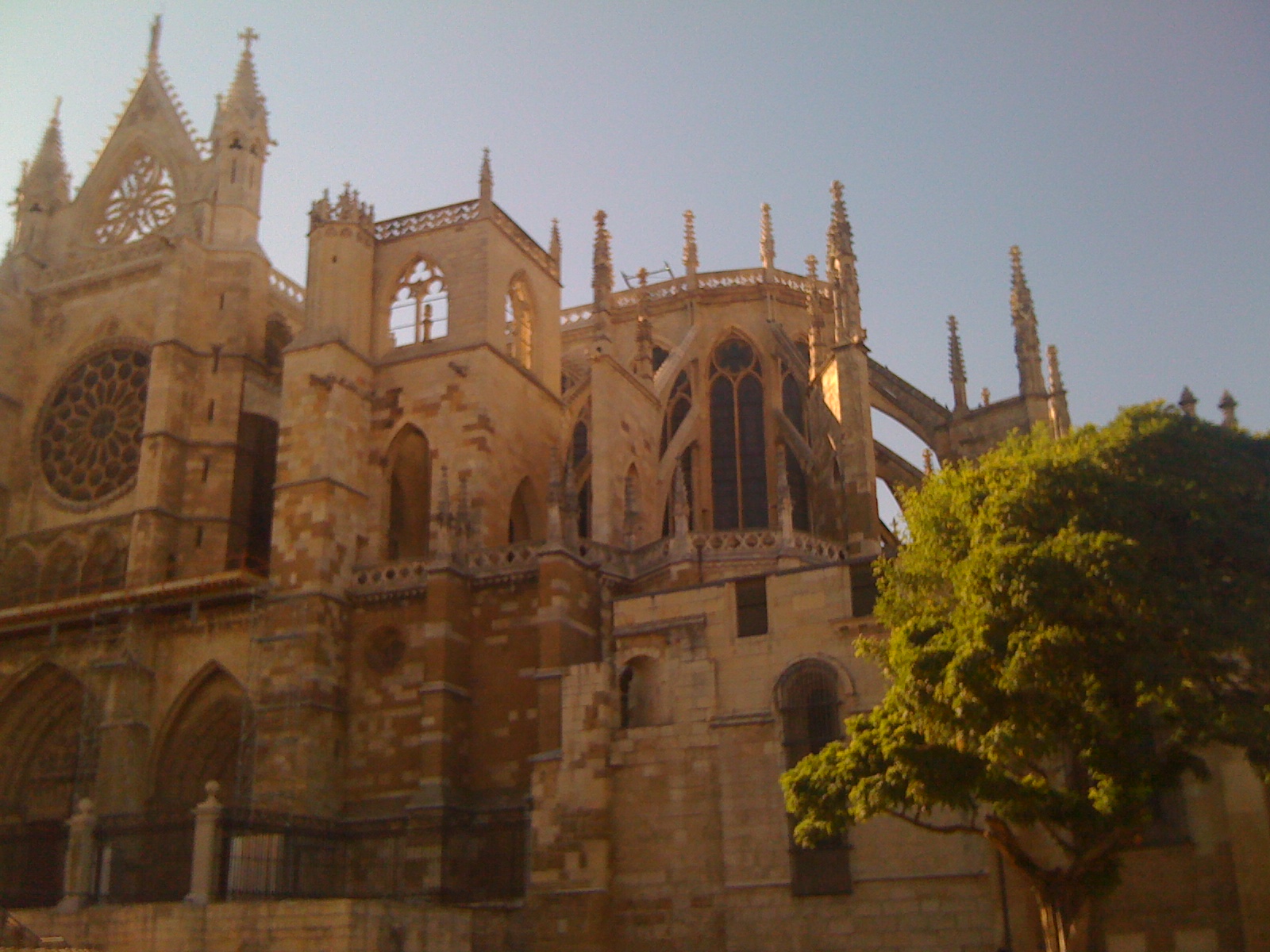 As saturday morning arrived, Reed and I learned that a large group of our peers had decided to go to Gijón, a coastal city about two hours north of León, so we found a great deal on a ‘non-refundable’ hotel. I hopped out of bed, showered, threw together a backpack and headed out the door to towards the bus station. About halfway there I ran into a few of my friends who were walking in the opposite direction. When I asked where they were going they told me that, “Apparently the weather in Gijón wasn’t that great, so everyone decided to stay in town.”

Perfect. Reed and I now had two options: 1) cut our losses, split the non-refundable hotel and turn around, or 2) embark on a totally spontaneous adventure to a city we knew nothing about.

Option #2 sounded a lot more fun, so we hustled to the bus station, purchased tickets and used my Spanish to find the correct terminal. About 15 minutes out of town we headed through some of the most gorgeous scenery. The bus rumbled loudly through light grey peaks, poking out of lush green hills. It was like nothing I had ever seen before. We arrived to a cloudy Gijón, we treated ourselves to McDonald’s (only the second outing of the trip) and walked across town to our hotel. Turns out, I had found a great deal, as Reed and I walked hesitantly into a 4-star hotel across from a huge park which acted as a barrier between us and the water.

Despite the weather we grabbed our suits and headed for the beach. The water was a bit brisk at first, but we adjusted just fine. After an hour or so of attempting to body surf waves, we headed back to our stuff, realizing just how bad of an idea not bringing a towel, or extra shoes actually was. That night we adventured to Plaza Mayor (the oldest and most fun part of the city) where we met some locals, watched the Olympics (in Spanish) and talked basketball with a guy who was beside himself when he learned that I didn’t think Spain was the best basketball team in the world.

Monday was our first day of classes in León, including my first Spanish class in over three years. For those of you who have always thought that one of the requirements to be Spanish teacher (at least in the Seattle Public School District) was to always be extremely excited and energetic, I have confirmed such suspicions. My Spanish teacher is incredibly kind, and full of energy, yet very patient. In my class alone there are four Chinese students, one Italian, six students from the UK and myself (the lone American), which makes for an interesting mix of cultures, ideas, etc.

I’m seriously learning to appreciate the midday “siesta,” which is taken fairly seriously here in Spain, and as I start to adjust to the Spanish time schedule (which is several hours behind America’s; lunch is enjoyed around 2 PM, dinner is served around 9 PM, bars open at 11 PM, etc.) I understand the importance of such a break. Before dinner today, we walked to a church nearby, San Isidro. Though smaller than some of the ones we saw in Italy and Paris, it was equally majestic, its outside coated in sandstone and the interior decorated with white marble.

The food in Spain is delicious! I literally have enjoyed every single meal that Justina (host mom) has made. Often her son and his family will come over for lunch (today we talked about soccer, fútbol, and his favorite team, Real Madrid), but dinner is usually just Justina and I. Though our language barrier presents minor problems, our conversations are quite interesting; tonight we talked about in Spain, and that if you are very talented, then you seize the opportunity and go to America. While this is swell for the person leaving, such a trend leaves Spain without talented professionals itself. She said it’s not that there are not smart, talented people here in Spain, but often if you are “the best” at something, then you go to America. I personally had never thought of such a phenomenon, probably because I lived in the place where all of these bright, athletic, and/or artistically gifted people were going to.

I do not say such things with any sense of arrogance. It is simply an interesting observation, that being how countries (and states, and cities, etc.) perceive those who leave them for somewhere else. [Does a man by the name of Lebron ring any bells?] Giuseppe Rossi is an American-born soccer player, who plays for the Italian national team. How does America receive him? Do they applaud him, for his transcendence of the European soccer talent barrier (one that has loomed over Americans for so long)? Do they despise him for his ‘choosing’ of another country over the U.S.? Do they receive him at all? I’d be willing to bet that most American households have no idea who he is. It’s certainly interesting to think about.