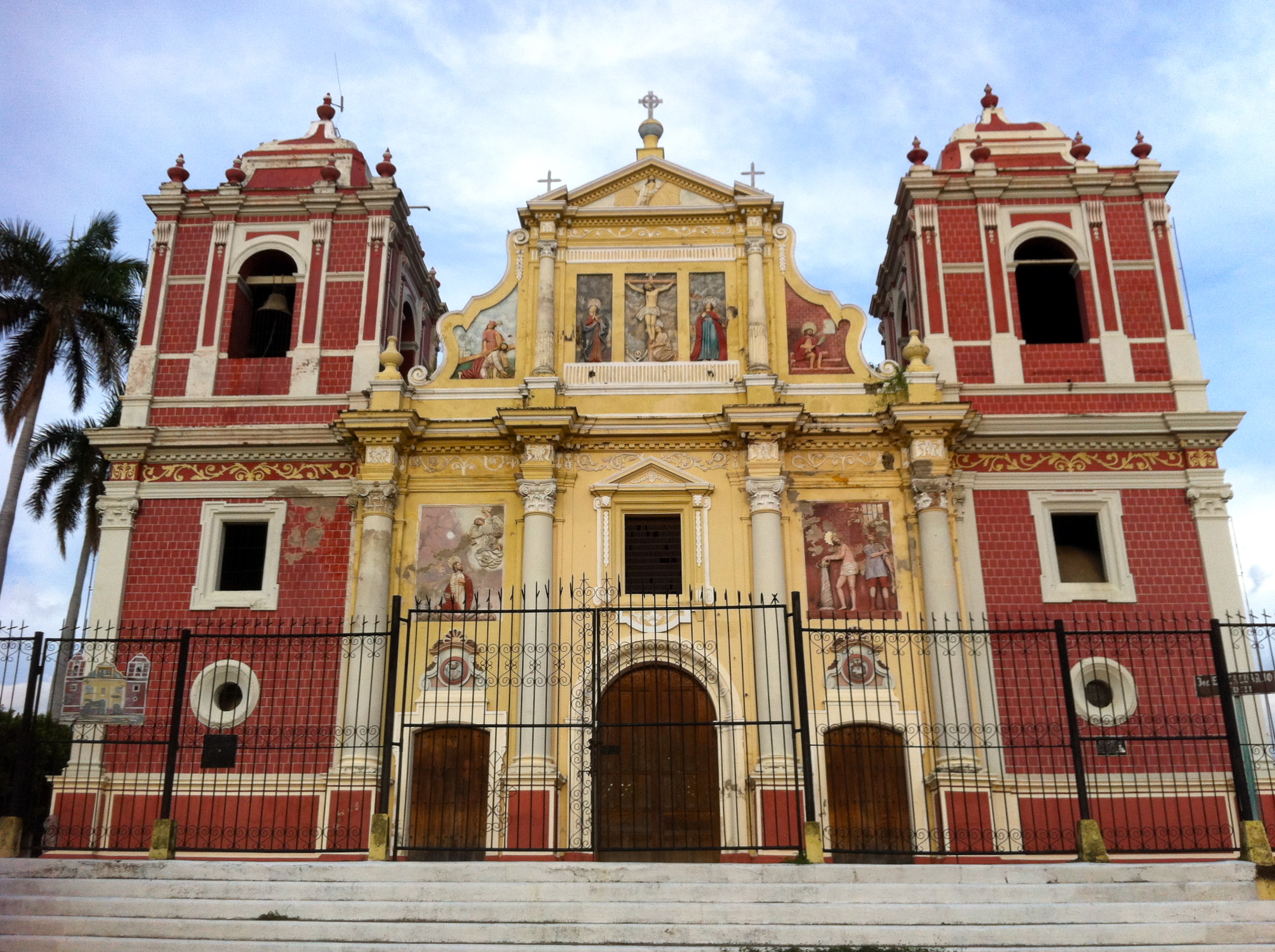 I jumped into the back of a monstrous, bright orange truck, not entirely sure how the next few hours were going to go. Shortly thereafter we traded the narrow, cobblestone streets of León for a windy, bumpy country road.

We approached what looked like a massive mound of black dirt, though this was no ordinary pile of dirt. This was Cerro Negro (literally meaning, “Black Hill”), the most active cinder cone volcano in Central America, and I was about to slide down it on a modified piece of plywood.

We navigated our way up the loose volcanic rock, which made cool squeaking sounds underneath our shoes. As we walked along in a single file line, the view from the ridge above the crater was amazing. To our right, smoke rose steadily out of a white/reddish sulfuric center; to our left the dark volcanic rock contrasted beautifully against the surrounding light green hills and wispy blue sky.

After a short, hilarious orientation we put on our bulky orange suits; we looked like a bunch of convicts, ready to make some daring escape down a steep volcano. When it was my turn, I strapped up my green-tinted, high school science class-like goggles, switched on my GoPro camera (video coming soon), sat on my board and kicked off.

At first the board was difficult to control; the front slid back and forth as I picked up speed. Finally, I found my balance and zoomed down the mountain. It was unlike anything I have ever done before.

At the summit, the view reminded me a lot of the top of a ski slope – you see the terrain in front of you (which was black gravel, instead of white snow), until it steeply drops off, leaving you with a breathtaking view over the entire surrounding area.

As I picked up speed I could feel my feet getting warmer, due to the friction, as well as the fact that they were touching an active volcano. Amid flying rocks, stiff wind and a unique adrenaline rush, I made it down without a scratch on my body. One girl in our group managed to hit 75 km/hr (about 46 mph), though the record still stands at 95 km/hr (59 mph!).

I finally got to play some soccer on the beach (it has been a lot harder to find people to play sports with than I thought), until it started pouring rain. I then spent the remainder of my time in León wandering around admiring the many churches and politically charged artwork. While León may feel like a bigger city, there isn’t a whole lot to do there, so I headed back down to Granada as my final stop in Nicaragua. One of my new friends works at a animal rehabilitation center near Liberia, Costa Rica, and being that there is no internet at the tree house, I wanted to take a quick taxi up there to determine if I would be accompanying him back to the farm.

I wandered down the familiar streets of Granada looking for a cab, but had no such luck. Two men, one who spoke English, near the Parque Central persistently offered me a taxi, though something in my gut told me not to go with them. I can’t really explain it, but the offering of assistance felt insincere, like the makings of a tourist trap.

And then out of nowhere, an older man came whipping around the corner and stopped right in front of me. There were already two women and two kids in the backseat of his taxi, nevertheless, he saw the other men closing in an attempt to strike a deal and immediately undercut their price. This time my gut told me to hop in, so I did.

Minutes later the man asked me where I was from. “Los Estados Unidos,” I replied, which disrupted the calm demeanor of the man and brought about a new energy in him.

“Los Estados Unidos es el mejor país del mundo,” he declared dramatically (“The United States is the best country in the world”). I was pleasantly surprised and honestly taken aback. Most people here have been very friendly and helpful, but not to the point of declaring my country the “greatest on Earth.” He went on to explain that while the U.S. does some bad stuff, all countries have bad people, and the U.S. helps those in need. Plus, they have Major League Baseball (his brother lives in San Francisco, so he is a Giants fan).

We went back and forth talking about politics, baseball, poverty, his favorite U.S. presidents (he really liked Ronald Reagan), communism, war, etc. About halfway, he was explaining why he feels that democracy is so great; “democracy allows us to be friends,” he said, extending his hand. As I shook it, and told him my name was Wilson, he smiled and exclaimed, “Como la pelota!” (“Like the ball”...from Castaway). As we neared the tree house the road became muddier and rugged; he slowed down and looked gravely at the rough terrain ahead. He then turned to me and said what perhaps might be the only words he knows in English, “I’m sorry, Wilson.”

The sincerity in his voice was heart wrenching. He felt as though he was letting me down. After that single sentence, the conversation switched back to Spanish and I assured him that everything was just fine.

Little did he know I had just experienced one of the coolest taxi rides of my life and a moment I’ll never forget.

I bid my new friend farewell and gave him a nice tip. Holding the money in his hands, he looked up, smiled, “Dios bendiga usted y Los Estados Unidos” (“God bless you and the United States”).

And with that he was gone.

It is crazy to think how people can instantaneously enter (and exit) our lives. For example, I decided to eat my last meal in Granada at my favorite restaurant: Garden Café, when I started talking to a group at the table behind me. Turns out they are part of The World Race, a sort of mission trip to 11 countries all over the world in 11 months. I had a good conversation with them, all because I offered them some advice on where to go on Ometepe.

I can hardly believe that my time in Nicaragua has finally come to an end, but what an experience it was. Nicaragua was actually a last minute addition to my itinerary and I am so grateful I took a chance on this perfectly imperfect country. Yes, Nicaragua is not without its problems, but it is also home to kind, friendly people, beautiful wildlife and an awesomely eclectic taste in music (I cannot tell you how many times I heard ‘Changes’ by Tupac, right after ‘Stand by Me’ played). I have grown more in the past few weeks than I ever imagined I would and could not have asked for a better start to my adventure.

Nicaragua, you a beautifully real place.

[note: I made it to San Jose, Costa Rica. I will try to get another post up soon!]