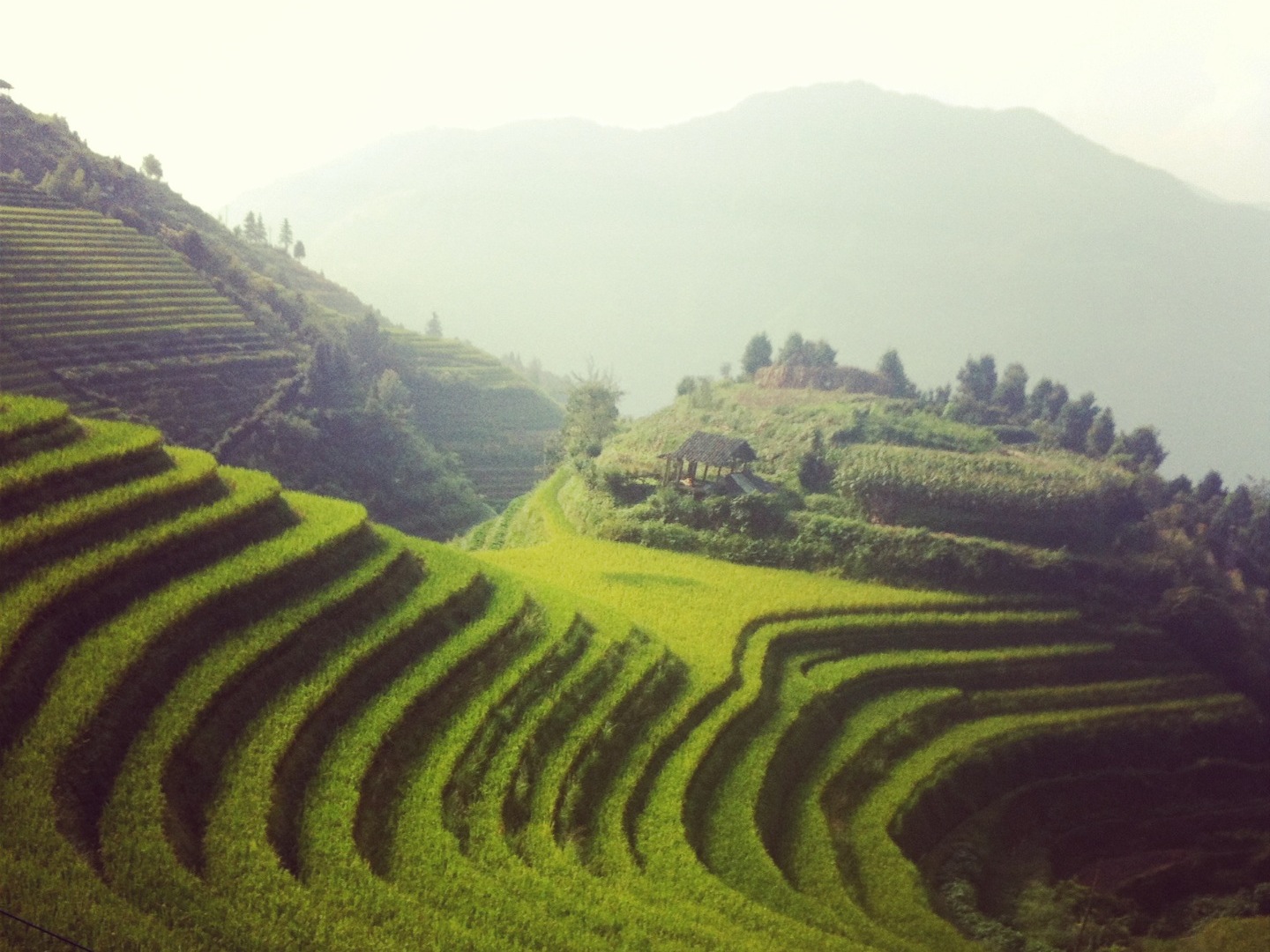 Yangshuo is the complete opposite of Hong Kong.

The Ecofarm is a quaint five story building run by Peter Pan (yes that is his real name) and his family, who are so kind and generous. All of the food served at the Ecofarm (which I personally thought was the best food we had China) comes from the family’s organic farm. The area was pretty quiet, minus the herds of ducks that waddled down the road.

The next morning we headed up the Lijiang River to cruise back down and admire the surrounding gumdrop-like mountains. The rafts seemed to be modern adaptations of ancient river floats. Rather than using bamboo, the rafts were built on eight or nine, thick white PVC pipes strapped together. On top of the pipes was a small wooden deck, which was covered by a small tin roof. The motor essentially was a modified open prop attached to a long pole that acted as the drive shaft. (note: I want to make one of these next summer.)

We walked through an ancient village, famous for making beautiful, handcrafted fans. And then hopped into kayaks and paddled down a much calmer, less traveled river, beneath the mist and the dark green mountains.

We returned for another delicious meal at the Ecofarm, though shortly after, screams echoed throughout the hallway.

One of the rooms had discovered an unwelcome guest. A brown, furry spider, perhaps a little smaller than my outstretched hand stood out against the pale yellow wall. Though this was the first large spider we had seen, though it would not be the last.

The next morning we took a bus into town to rent bicycles. I had never ridden a tandem bike before, so Parker and I decided that a country where traffic laws are seemingly non-existent would the perfect place to try. We hopped on the bike and sped through a busy traffic circle at the heart of the city, weaving through a few cars before making our way to the other side of the road. We sped down the road until we eventually got to a much quieter, dusty road that led back to the Ecofarm.

That afternoon we went to Jima Elementary School, just a few blocks down the street from where we were staying. As much as I tried to not compare this experience to my time in the Dominican Republic, I could not help myself. Sure, the kids loved jumping all over me and hanging onto my back, but they seemed to lack something, some sort of childish spirit. They did not seem as fun loving or carefree as the children in the DR, even though they had “more” (according to GDP per capita).

It was at this point in time that I realized that the majority of people here frankly don’t seem very happy. A smile is often difficult to find, on the streets of a busy megacity or on the side of a dirt road in the countryside. While our guide, Chinn, and our hosts at the EcoFarm were incredibly kind and generous, it had become clear to me that there was some large part of Chinese culture that I still do not understand, that perhaps I will never understand.

We bid farewell to the cozy EcoFarm and set off for our next destination. We finally pulled off the road into a driveway in front of what appeared to be our home for that evening. We walked through the lobby (a large empty room), down a pathway and into a rather creepy building. More shrieks echoed throughout the halls as our group opened the doors to our new rooms, but this time the screams were not spider-induced.

Black mold covered the ceiling of two of the rooms, and as I tossed a water bottle onto my neatly made bed, three cockroaches scurried out from underneath the blankets.

The place looked as though it would have been pretty rowdy back in the day. There was a cool rooftop terrace and it was located on a pretty little river. The only problem was that this was 2013, not 1970.

We hiked up to a trio of nearby waterfalls, and actually hopped into one of the cool, crisp pools at the base of the second waterfall. After we returned, we went to a restaurant nearby where we sat around small campfires. We were given a platter of uncooked food on skewers and buckets of beer. As it started to get dark, an eerie green light perched on the opposite side of the river turned on. It was at this point that everyone decided to start opening the beers.

I think the following morning was the first time everyone was excited to get on the bus.

We arrived in Longji, a cozy mountainous village, on a cool, drizzly afternoon, and meandered up the steep, slippery stone hill, near the top of the village and into our clean, rustic hotel.

The next morning we awoke to a misty sunshine and started out along the ridge, exiting towards the top of the town. We came around the first corner, only to peer out across a lush green valley of rice terraces that looked like giant staircases descending into the mist below.

The terraces were absolutely beautiful. Prior to this trip I associated China with big cities, lots of people and dirty pollution, yet we found ourselves in the middle of a mountain range, with no one else around but picturesque natural scenery.

After about five hours of hiking we stopped and had lunch, and then trekked on for another three. At this point the sun had emerged, thus everyone was quite relieved to finally reach the air-conditioned bus and to Shaosong’s hometown, Guilin.